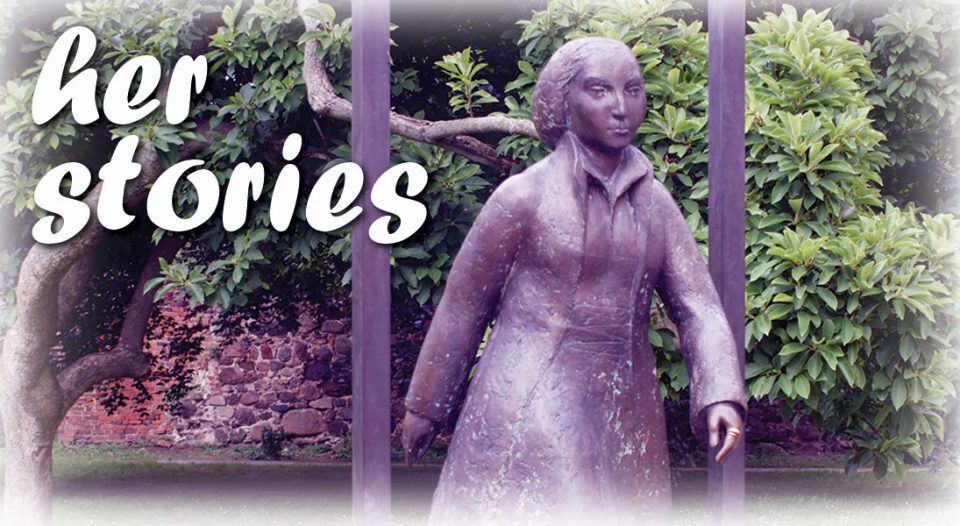 I grew up in a typical Lutheran church, with male pastors, singing “Sons of God” and “He’s Got the Whole World in His Hands.” I remember asking my mom once if God was a man, and she said God did not have a gender. But the language in the church sure made “Him” seem otherwise.

My world broke open at Pacific Lutheran University when I took feminist theology and realized that God was not actually a white man in the sky. My professor was the first woman pastor I’d met, but she was a Methodist. When I began considering seminary, my (female) cousin told me women couldn’t be pastors.

Disillusioned with church after college, I didn’t attend until I got married at age 25. But I soon grew frustrated when our pastor didn’t use inclusive language and called me by my husband’s name. I left the Lutheran church and began attending a New Thought church with an inspirational woman pastor.

Then my world cracked open again. I gave birth to my first baby at 24 weeks, weighing 1 pound, 11 ounces, and terribly sick. We were not able to hold him for five weeks, and he was intubated for six weeks. Spending 117 days in the NICU, he endured many near-death crises, and the experience tried our faith and endurance. I met our new pastor, Laurie Larson Caesar, in the NICU.

My dad was on the call committee, and when he met Laurie, he said, “I think you’re the pastor that will get my daughter back to the Lutheran church.” She was a regular visitor to Christopher’s bedside in the NICU. Even though she had two new, demanding jobs (she’d also started working as a university chaplain) and she was new to Portland, a family in her new congregation was in crisis and she answered the call for help.

I returned to the church, buoyed by the support we received and the fact this new pastor was my age AND a woman. Our church, Spirit of Grace in Beaverton, Ore., is the world’s only Lutheran-Catholic congregation. Pastor Laurie leads us with theological imagination, moral courage, creative compassion and intellectual energy. She’s guided the congregation through difficult questions, such as what to do when our priest retired and we couldn’t get a replacement. (We prayed, discussed, hired a Catholic lay leader, and built a team of Catholic priests to celebrate Mass.) She’s developed close working relationships with two Catholic lay leaders and five Roman Catholic priests over the years.

More than 10 years ago, Pastor Laurie led us through the process and vote to become Reconciling in Christ, before most other ELCA congregations did so. I was proud and thrilled to see her speak at the 2009 ELCA Churchwide Assembly (via video feed), sharing our congregation’s unique story and how inspired our Catholics are by the ELCA’s inclusivity. We’ve had multiple LGBTQIA speakers and just finished another sexuality and gender series led by two young women. We walk in Portland Pride and the AIDS Walk and are involved in ReconcilingWorks.

Pastor Laurie also practices a form of collaborative leadership that is unusual among clergy. I was president of our church council when she was diagnosed with stage 3 breast cancer in 2012. Because of the strong leaders she had nurtured, we rallied around her and stood strong in her absence. After treatment and recovery, she returned more energized than ever. In the following year, Spirit of Grace received a generous grant from the ELCA for transformational ministry. As part of the grant, Pastor Laurie created and led the first pastoral internship program for Catholic and Lutheran graduate students in religious and pastoral studies. Our first Lutheran intern enriched our congregation with rap, Spanish and his wonderful Mexican wife and two daughters. He is now pastor in a bilingual congregation in San Diego, Calif. The next year our Catholic lay intern was pursuing her Master of Divinity degree and trying to discern her next steps in the Catholic church. Pastor Laurie has been a phenomenal role model and inspiration for countless Catholic and Lutheran women and men of all ages. One of our young Catholics once said, “When I grow up, I want to be just like Father Laurie!” Being ministered to by a pregnant pastor was a first for our Catholic members, and the experience moved many of them to tears. Although we have more Catholic members than Lutheran, Pastor Laurie is minister to all of us.

She has revitalized worship with prophetic preaching (channeling Katie Luther or biblical women) and by bringing in jazz pianists and lively music, reconciliation and healing services, prayer vigils, and a liturgical season of “Creationtide.” She’s started book groups to discuss faith, racism and social justice and initiated a summer concert series and an annual Advent auction to raise money for special programs. The auction brings benefits all year long through year-round dinners, parties and classes full of fun and fellowship.

Through Pastor Laurie’s leadership, Spirit of Grace supports programs such as Bible study and centering prayer, community organizing through the Metropolitan Alliance for Common Good, and Holy Land ministries supporting peace in Palestine. She and our Catholic lay leader visited the Holy Land with the Oregon Synod in 2014, and we’ve helped other members visit as well. Pastor Laurie has pushed the congregation out of its Lutheran and Catholic comfort zones to reach out to other faiths through small groups like Bras, Bibles, and Brew, meetings with local Muslim women, inviting a Muslim woman to speak on Mother’s Day, educational outreach through Lent and Advent soup suppers, partnerships with other congregations, and creativity workshops. She encourages children’s voices and education programs that offer a multigenerational connection. She also leads intellectual, spiritual education programs covering a variety of topics ranging from Pope Francis, Martin Luther, social justice, and peace-making to how to incorporate new styles of worship.

Pastor Laurie has helped build a vibrant, vital congregation with prominent women leaders of all ages. We conducted a wildly successful capital campaign to make our building more hospitable and accessible to all, and in 2015 we scored high in all areas on the Oregon Synod’s Congregational Vitality Index survey: connecting members with God, with each other, and with the world. She’s launched colleague groups such as a clergy writers’ group, a prayer group, and a Beaverton area pastors’ group. In 2016, she initiated a Lenten pulpit swap series in which five pastors of various denominations took turns preaching at each other’s churches on the theme of “Got Questions?”

After the November election, Pastor Laurie initiated several activities: conducting a prayer service, writing “Lament of a Liberal Christian: An Open Letter of Confession and Commitment,” co-forming a Facebook group called the Wild Hope Justice League (with 177 interfaith members), and developing a Lenten series on “Radical Love: Deep Listening in Disturbing Times.” Speakers included two undocumented immigrants and the president of the Portland NAACP. Pastor Laurie reaches out and expands our minds. She also takes inclusive language seriously, and that is a huge deal to me.

I cannot begin to explain how meaningful it has been for me to have a vibrant, energetic woman in the pulpit. I have been doubly inspired to see Laurie mother her daughter, Sophie, and to see how she combines her personal perspective of life with her sense of humor, keen intelligence and vast knowledge of theology and the Bible. It is radical for me to be ministered by a woman who is not only my friend but also a mother and passionately committed to peace and justice.

My dad’s wish came true. Now I have three sons, all baptized by Pastor Laurie, and they have only known a woman pastor. I’m gratified the church is reforming for the next generation. The future is female!