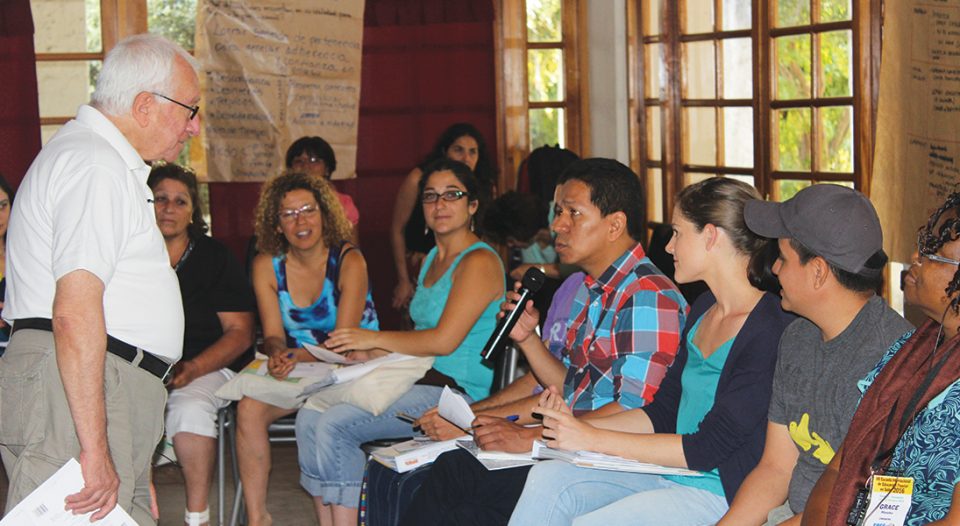 Lisandro Orlov explained the mission of Educación Popular En Salud (EPES, Popular Education for Health) by recounting the story of Jesus’ encounter with Bartimaeus, a blind man begging by the roadside (Mark 10:46-52). The parable culminates with the miraculous healing that restored Bartimaeus’ sight. But Orlov, an Argentine Lutheran pastor who leads courses with EPES, underscored two frequently overlooked aspects of the story.

First, Orlov pointed out, the disciples tell the beggar to be quiet, “much as churches frequently silence and ignore the oppressed. But Jesus tells them, ‘Call him!’ ”

Second, he said, Jesus asks Bartimaeus directly, “What do you want me to do for you?”

That question, Orlov said, embodies the participatory philosophy that is the hallmark of the EPES Foundation’s work of empowering women in the dusty neighborhoods on the urban periphery of Chile. All their lives, he said, these women have been told to be quiet and no officials have asked what they needed.

EPES methodology hinges on transformative participation. The foundation doesn’t suddenly appear in communities with a preconceived program. Instead, it guides neighbors in assessing their conditions and, on that basis, together they design a work plan.

Karen Anderson, ELCA Global Mission personnel in Chile and founder of EPES, recalled, “For years, the EPES team dreamed of creating an international training program to share our decades of experience with participatory and community-based methodologies to help poor communities gain more control over their lives and health.”

In 2010, with backing from ELCA Global Mission, their dream came to life: EPES launched the first session of la Escuela (“the school”), its shorthand for the EPES International Training Course in Popular Education in Health. Since its inception, la Escuela has brought together 150 participants from 19 countries, and 11 Lutheran churches regionally, to spread EPES’ participatory and community-based methodologies throughout the Americas as well as three African countries.

“Recognizing the other as an equal”

When Orlov was asked to accompany the family of a man dying of complications from HIV, their “solitude shocked me,” he said. Gradually, in the course of his work with people affected by HIV, “I discovered my religious identity, why I am a Lutheran in Latin America,” Orlov said. “Because we are a radically inclusive community.”

Orlov, who has collaborated with EPES for 25 years, has been a constant at seven of the foundation’s eight International Training Courses. A former regional coordinator for the Lutheran World Federation’s HIV/AIDS Action Plan, Orlov today conducts workshops on the disease at la Escuela.

“I discovered my religious identity, why I am a Lutheran in Latin America,” Orlov said. “Because we are a radically inclusive community.”

That people have the right to dignified public health is a basic tenet of EPES. The organization’s concept of health refers to a person’s totality and the social determinants that affect one’s physical and mental health.

Social workers, health professionals, church outreach staff and other international course participants learn how to address these issues through lectures and in small groups. They also work with the local health groups created by EPES 30 years ago, helping them to form critical analyses.

Building and working in networks with other groups to make use of existing resources is another key aspect of EPES methodology. “It goes against the grain of postmodernism—you work in networks, rather than fragment the reality, in order to transform it. That is one of the course’s singular contributions,” Orlov said. “Participatory education means that I open myself to the other. Recognizing the other as an equal is a theological teaching.”

A church that transcends borders

Seeing the course’s philosophy in action at the Las Cañas Community Center of Valparaiso, Chile, gave Orlov pause. Several staff of the center, which coordinated reconstruction and provided support after a fire ravaged the port city’s poor hillside neighborhoods, have attended la Escuela. “Community leaders now see themselves and their role in a different light. It is not an autocratic leadership, but something totally new,” he said. “It reflects immense respect for their own neighbors.”

“The course renews or builds commitment to that vision not only among Lutherans but among different denominations and non-churchgoers who receive training and then return to their communities with the sense that the gospel signifies a commitment to society,” he added.

Moreover, participants form deep bonds with one another. EPES also keeps in touch, offering guidance in the process of putting into practice what they learned.

“An outcome I am excited about is EPES’ continuing support for special projects designed during the training,” said Anderson, naming two projects that stood out. First, “the scholarships and mentoring of youth leaders from the Las Cañas Community Center in the aftermath of the firestorm,” she said. “[And second] our technical and financial support for the Hope Foundation for African Women to create its health promoter training program in rural Kenya.”

Orlov is already looking forward to the 2018 course. “The Escuela embodies the evangelical sense of justice with all stigmatized people of society,” he said. “Perhaps that explains why I, as a pastor, feel so comfortable working with EPES. I feel at home because we speak the same language. I feel that we are doing what Lutheran identity asks of us: building a society in which no one is left out.”

Maxine Lowy
Maxine Lowy is a journalist and translator who lives in Santiago, Chile. Her focus is on issues related to human rights, justice, historic memory and gender.

In Chile, the Lutheran church fights for the dignity of women

Connecting global and local mission: ‘No one is irrelevant’

‘Better health in my community’