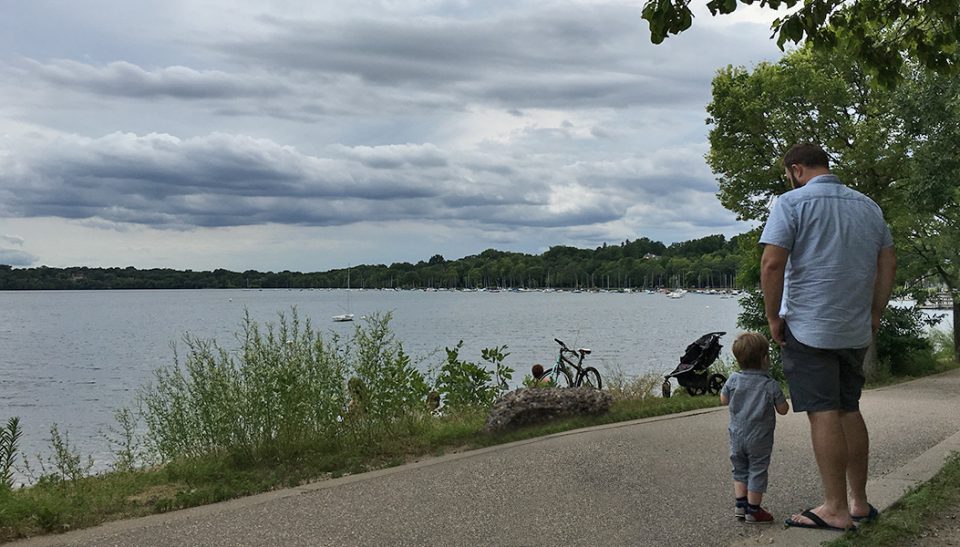 The author with his older son.

A year ago, the following sentiment is not one I would’ve predicted I’d be expressing this Father’s Day: Martin Luther and the birth and infancy of my second child will always be inextricably linked.

I’ve been on the Living Lutheran staff for seven months—funny enough, my first day was on Reformation Day, Oct. 31. Less than two weeks later, my son was born. (Incidentally, I don’t recommend starting a new job and having a kid at the same time.)

Since then I’ve been immersed in Reformation history and theology, doing research for projects like our Reformation 500 lists as we approach its 500th anniversary. And it’s been interesting, and often surprisingly helpful, to track my young son’s development and growth as I’ve simultaneously learned from the reformers.

As I think about the kind of person and dad I want to be, it’s not hard to see the ways in which the lessons of Luther and the reformers can apply to our personal and family lives as well as to our public life. These are some of the most valuable lessons I’ve learned from the example of the Reformation as they’ve related to fatherhood.

Don’t be afraid to think outside the box

Luther, faced with a conviction about the state of the church that he couldn’t shake, acted on his principles and challenged the norms of his day and of his position. He didn’t settle for the status quo, and used his gifts to think beyond what was expected of him.

When my first child was born, although I was thrilled to have a boy, I admit to having had some trepidation at the prospect of a son. I’d imagined myself as a dad of daughters, and I suddenly felt an internal pressure to be a certain kind of father. Was I athletic enough to have a son who might be really enthusiastic about sports? Was I handy enough to teach him to do projects around the house? Was I a good enough man to model manhood?

It’s not hard to see the ways in which the lessons of Luther and the reformers can apply to our personal and family lives as well as to our public life.

Of course, I quickly realized that those concerns were silly. First, there’s no reason why those questions shouldn’t also apply to daughters. Second, I’ve found that the kind of person you are translates into the kind of parent you are, and that parenting successes come when you’re being yourself.

It’s easy to feel a sense of shame at not approaching parenthood the “right” way when reading parenting books and websites. But I believe I’m a better dad to my two sons when I trust my instincts and try not to worry about expectations.

The importance of surrender

Legend has it that Luther decided to leave law school and become a monk when he got caught in a lightning storm. On the spot, he vowed to join the monastic life if God would spare him from the storm; he kept his word and entered the monastery shortly thereafter. Whether or not all the details of this event are true, there’s no doubt that a consistent theme throughout the lives of Luther and the reformers was surrendering to God’s will, and putting a bigger cause ahead of their own comfort.

My journey to fatherhood was initially a little rocky. My wife and I both knew we wanted to have kids, but as a highly sensitive, introverted Enneagram type nine, I had great anxiety about the disruption that children would cause to the way life looked for us, pre-kids. With the help of a counselor, I was able to start implementing one of the most transformative spiritual practices I’ve encountered: trying to actively surrender and give up (the illusion of) control.

Throughout pregnancy, labor and parenthood, surrender has been the mantra my wife and I have returned to over and over.

Throughout pregnancy, labor and parenthood, surrender has been the mantra my wife and I have returned to over and over. And by taking that posture, I’ve been able to enjoy my role as a dad more than any other I’ve had.

The joy of holistic vocation

The idea of vocation was foundational to the Reformation. Luther and the reformers espoused the notion of living out our faith in all the roles we’re called to—at work, in ministry and with family. A natural outgrowth of this holistic vision was that the intimacy and fun of family and home life often permeated the reformers’ work and ministry as well.

Luther knew the importance of fun, and famously enjoyed conversations about life and theology at the dinner table with friends and family—over beer he and his wife Katharina von Bora brewed—that went late into the night.

“Work-life balance” is something all parents struggle with, but with a toddler, a new baby and a new job, I felt that tension especially tangibly. Still, when new or expecting parents have asked me one thing I would tell them about parenthood, I usually say something I hadn’t heard much when I was wrestling with becoming a dad: it’s fun.

Maybe it seems obvious, but I wasn’t expecting to have as much fun as I do with my boys. Of course, every day as a parent brings a range of emotions (and it certainly isn’t always the word on the tip of my tongue), but more often than not, fatherhood is a fun adventure for me. May that be so in the way we approach and live out our faith in all areas of our lives.