That’s how Pastor Peter Krey describes his former congregation’s support of the original, half-hour long production of The Luther Musical on Reformation Sunday 2015. 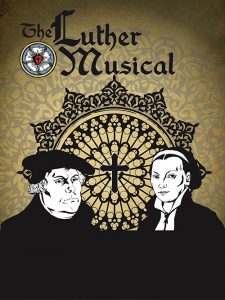 The Luther Musical logo, as designed by Joshua Krey.

What started as a play by Krey written after attending the 1983 Washington, D.C. Luther Jubilee in honor of Martin Luther’s 500th birthday, has since turned into a full-fledged, two-act musical, thanks in part to the talents of his family; namely his son, Mark.

With a PhD in Luther Studies for Peter and a Bachelor of Arts from the Ray Bolger Musical Theater program at UCLA for Mark, this father-son duo has ventured in creative space for some time. Off and on together, they worked on the piece from 2000 to 2002 before and after Mark’s graduation from UCLA in 2009.

“We started working on the musical non-stop in the last three years,” said Peter. “I had been hoping to make my play into a musical for years and the 500th Anniversary of the Reformation provided a convenient deadline. But without the supportive participation of the members of Christ Lutheran Church, which called me out of retirement, launching the musical would have been impossible.”

The Kreys’ experience being creative was joyful, having laughed many times in originating “Mendicant Monks,” a song from the show during which the monks vie with each other to be the most humble when they are singing the high note at the end. But, it was putting the notes on paper for the musical accompaniment that proved to be a challenge.

“We underestimated how hard it would be to get the sheet music, that is, the score for the piano accompaniment, since I play trumpet by ear,” said the older Krey. “Thankfully, Mark plays guitar and knew about chords and harmony. Thus, I could write only the notes for the melody and Mark filled in the chords for the harmony.”

Both of Krey’s sons, Ashley and Mark, are song-writers, both having contributed to the show. In addition, son Joshua designed the logo. A young music student helped arrange the work, which now includes 25 songs, plus two overtures and a finale. Many of the songs have Luther’s very own words only rhymed.

“My PhD in Luther Studies stood us in good stead,” joked Pastor Krey.

Once the show was written and composed, it was time to mount a production.

For the Reformation Sunday 2015 preview performance, the Kreys kept the casting simple, for the most part. They each sang while members of the church also played parts.

“Getting to play Luther was an unexpected blessing,” said Mark. “Finding someone to play such a big part proved to be very difficult as we began casting. Playing Luther 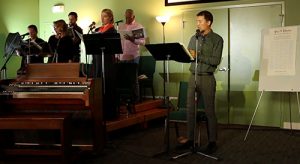 helped me identify with him in ways I never had before in all the years of my youth in which I had been told stories about him.”

Other performances included Søren, a student himself, who played the student and monk, Luther, while his father, Lars played Professor Luther and Lars’ wife Bertha, played Katie von Bora. This family-centric performance may have also been a bit too real.

“In the marriage of Luther and Katie at the end of the musical, it seemed as if Lars and Bertha were renewing their own marriage vows,” said Pastor Krey.

Taking the preparation for the upcoming October 2017 production in steps, the team has held concerts singing some musical selections, showcased the musical with four actors in costumes singing only half of the songs, and most recently, performing a dramatic reading and singing of the full musical with sound effects and a slideshow about Reformation times at St. Paulus Lutheran Church in San Francisco.

The full production planned for the end of October is likely to include additional elements, like costumes, props, and sets, as well as dancing, which makes for a complete musical theater experience.

“Despite knowing, (because of Tim Wengert, an ELCA theologian, that the escaping nuns were stacked in a fish wagon like herring barrels), we have them jump out of the barrels to have Luther match them with a mate,” said the elder Krey. “Humor won out over history.” All the nuns accept their matches, only Katie refuses every proposal and insists she will only marry Luther, who finally gives in. 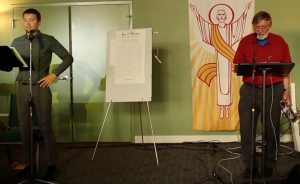 Mark (left) and Pastor Peter (right) in a performance.

Reviews have already streamed in from the dramatic reading, including the congregational president at St. Paulus, Jordan Ward, who wrote that the musical was a “must see!” Pastor Dan Solberg of St. Paulus noted that Luther’s song, “While Philipp and I Drank Beer” had good theology. You can watch this 90-minute performance on YouTube.

The Kreys’ invite any groups, including congregations, schools and colleges with drama departments to host a production in the forms available: the showcase of selections, the dramatic stage reading, an abridged 50-minute version or the full production. Their goal is to have it played 20 times through the year in honor of the Reformation anniversary and, hopefully, Broadway.

For information on how your congregation can access and produce The Luther Musical, please contact Pastor Peter Krey at peterdkrey@gmail.com.

If your congregation chooses to participate in the Reformation study with coloring pages, you’re invited and encouraged to share photos with ELCA 500 on the ELCA 500 Facebook page or via 500@elca.org.