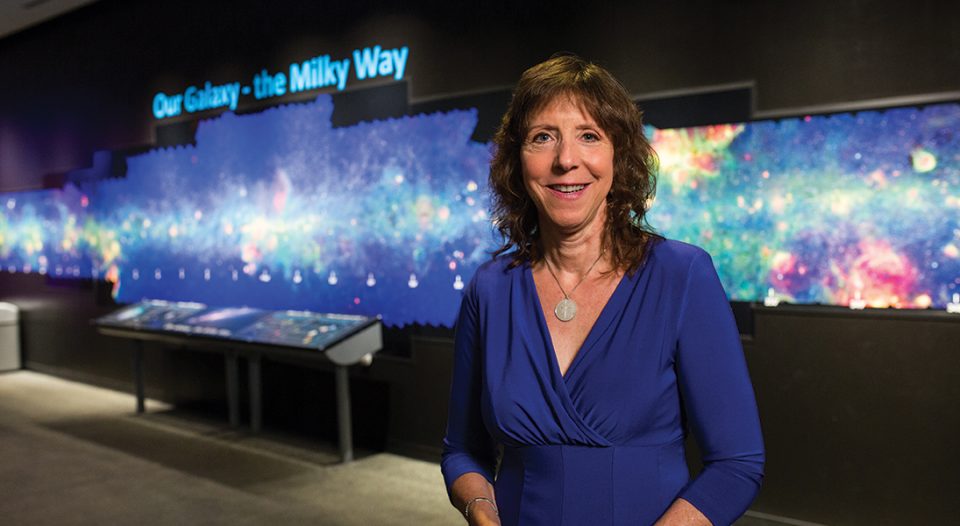 “I’m a Lutheran” is a monthly profile featuring ELCA members around the country. The profiles showcase ELCA members in all their diversity, connecting one another through individual faith stories as Lutherans. Sentence prompts are provided to each person featured. If you’d like to nominate someone for “I’m a Lutheran,” email megan.brandsrud@elca.org.

I think astronomy teaches us humility and reminds us that God is bigger than human understanding. It cautions us not to demand that the Divine conform to limited human ways of imagining God.

I pray that humanity will unite across our differences in order to protect and preserve the delicate web of life on our planet, and to appreciate the diversity and interrelatedness of that life.

I believe science and religion are connected because they both make truth claims about the nature of reality, albeit from different perspectives and with different emphases. One might say science is concerned with the “how” of the origin and workings of the cosmos, while religion is primarily concerned with the “why” questions of ultimate purpose and meaning.

I share my faith through my vocation as a scientist. Along with my Jesuit colleagues at the Vatican Observatory, I view scientific exploration of the cosmos as a form of worship, honoring the God of “all that is.” The motto of the Vatican Observatory is “Deum creatorem venite adoremus”: Come let us adore God the Creator.

Serving on the task force that created the ELCA social statement on education was a wonderful experience whereby I could connect with other Lutherans who share my passion for advocating quality education for everyone.

People are surprised that I gave birth to three children during a two-year postdoctoral fellowship at NASA Ames Research Center (Mountain View, Calif.). My mentor was certain that established some kind of record. In any event, it was as challenging as it was rewarding!

I think it’s important for religious leaders to contribute to science by working with scientists to help people of faith form conscious bridges between their religious and scientific understandings of nature. Far too much time is spent arguing the results of science, with not nearly enough time allotted to thinking about how scientific knowledge might enrich theological reflection, and how technology produced through the application of science can best be used toward improving life for the poor and marginalized in society.

My favorite piece of Scripture is Psalm 8:3-5: “When I look at your heavens, the work of your fingers, the moon and the stars that you have established; what are human beings that you are mindful of them, mortals that you care for them? Yet you have made them a little lower than God, and crowned them with glory and honor.”

Appearing on the Oprah Winfrey Network’s “SuperSoul Sunday” gave me a strong appreciation for the challenges of filmmaking, and the creativity of those involved in this endeavor. The three-minute piece in which I appeared was the result of a full day recording at the Adler Planetarium in Chicago!

I believe the only way to truly understand any community is by becoming an active participant in that community. I am convinced that this is the best way to foster productive dialogue between science and religion, as well as better public understanding of science. An exciting aspect of my career is facilitating public contribution to large, web-based research projects (citizen science) in which millions of people around the world participate.

My favorite church memory is attending a faith and science retreat led by ELCA pastor Bruce Booher with several members of my congregation. The sheer wonder of creation is sadly often lost in day-to-day life. What a tragedy that fewer and fewer people experience the majesty of viewing the Milky Way in the night sky due to increasing (and for the most part, unnecessary) light pollution across our planet.

I struggle with managing stress and finding balance between family and work. I never feel as if I’m devoting enough time and effort to either. Having an outrageous commute—often taking more than three hours out of my day—certainly contributes to this, and has been the biggest downside to my career over the past 19 years.

In my role as an affiliated faculty member of the Zygon Center for Religion and Science at the Lutheran School of Theology at Chicago (LSTC), I’ve had the pleasure of sharing my enthusiasm for exploring the cosmos with many seminary students. The incorporation of science and religion modules in core seminary classes has made LSTC a bellwether in equipping seminarians to address many issues likely to arise in their future careers as religious leaders, from relating scientific and theological understandings of creation, to facilitating care of congregants suffering from dementia and other neurological conditions.

An issue I’m fighting for is promoting a “both/and” (rather than “either/or”) approach to science and religion. I’ve organized “Clergy Days” at the Adler Planetarium to raise awareness of the important contributions that clergy have made to our contemporary scientific knowledge in astrophysics and cosmology. We desperately need to equip talented young people in our churches with tools to help bridge gaps in communication across scientific and religious communities in order to address the many challenges facing the world today.

I’m a Lutheran because I’ve found a deep appreciation for paradox and ambiguity among Lutherans who seek to ask the right questions, rather than demand all the answers.