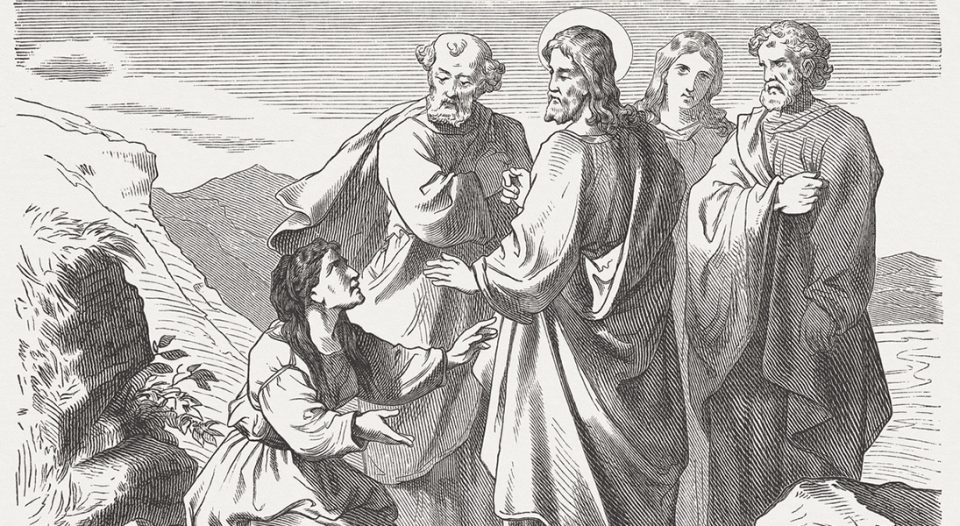 It’s disconcerting to read about Jesus behaving in what looks like a totally un-Christlike manner. There is no way to see what Jesus said to the woman about taking the children’s food and throwing it to the dogs as anything other than insulting and demeaning to her—both as a woman and as a Canaanite. Insult aside, we gentiles have a hard time reconciling the understanding we have of Jesus as savior of the world with Matthew’s quote that Christ came only to the lost sheep of Israel. So pastors and Bible teachers have turned to a series of “explanations” to get Jesus off the hook:

Now that I’ve set it up, you can all look at me expectantly and think, “OK, pastor, which is it?” And here’s the thing, I really don’t know. Did Jesus have an authentic conversion here, one that extended his mission beyond Israel to all the world? We don’t know. Did Jesus already know that his mission extended beyond Israel to the gentiles and this encounter was a brilliantly ad-libbed teachable moment? I don’t know.

But there is one important thing we can know: as a result of this encounter and text, the mission of Jesus is irreversibly defined as going beyond the boundaries of Israel. However it is that he got there, the end result is that from this moment forward there could be no question that the kingdom of God included everybody. And, whether or not Jesus himself had a conversion experience around this issue, this text as it stands certainly makes it appear that he did. Because of this, it’s important that we consider our own lives and see if there are places where conversions are necessary in our understanding of the wideness of God’s mercy.

But there is one important thing we can know: as a result of this encounter and text, the mission of Jesus is irreversibly defined as going beyond the boundaries of Israel. However it is that he got there, the end result is that from this moment forward there could be no question that the kingdom of God included everybody.

One of the key divides in American Christianity is between what I call “the conversionists” and the “raised in the faith folk.” On one side are those who insist on a conversion experience, a moment of “getting saved.” On the other are those of us who believe we can be raised as Christians, growing and maturing in the faith. Sometimes we can get a little too strident in the theological defense of our tradition’s position on this, becoming what former Sen. Alan Cranston called “rigid as a fire poker without the occasional warmth” (Time, Aug. 8, 2011).

And, just like those who take hard-line political stands, we can fail to learn what others have to teach us. I’ve been asked many times, “Brother, are you saved?” Somehow the answer, “I’m a Lutheran pastor,” doesn’t seem to satisfy the questioners. While I’ve tried to avoid debates about conversion, I have learned something from my conversionist friends. I’ve come to understand that conversion, recognizing the way God has called and changed us, is important to the growth of our faith.

Now when someone asks me, “Have you been saved?” my answer is, “Yes, many times.” Looking back, I realize my life has been a series of conversions, of stressful times when my preconceptions about the nature of God have been dashed upon the rock of God’s word of law and promise of hope to all people. Out of those often-wrenching collisions, a new me and new direction for my life and faith have emerged.

I think I count as my first conversion the day I rejected the thoughtless racism of the rural South in which I was raised. The incident is simply too embarrassing and shaming for me to tell, except to say that when I was in high school I hurt a friend very deeply and in the process learned the depths of the evil to which I was capable of sinking. I also learned that only God’s love, forgiveness and power of reconciliation could make it right—and it did.

Since that day in 1969 I’ve had many conversions—about liberals, conservatives, communists, tea partiers, men, women, Yankees, intellectuals, rednecks, homosexuals and, and, and …. Every time I have come to a place where I think I’m OK, God opens up another area in which I’m limiting God’s love, mercy and grace. And one more time, I have to go through the process of being broken down and rebuilt by the power of God’s redemptive love.

Since I’m always losing sunglasses, I try to keep a pair of clip-ons in each of our vehicles. Of course, I lose those too. At the beginning of the summer I bought a pair to wear in my pickup. For two weeks, I fretted and fussed with those sunglasses because they just didn’t fit tight. Finally, I took a good look at things and discovered it wasn’t the clip-on that was crooked, it was my glasses. It’s like that with the word of God in our lives. We continually try to bend God’s word to the shape of our lives, and we continually find it to be an uneven fit. The salvific moment, the moment we begin to be saved, to be converted, is when we reverse the process and begin to bend our lives to the shape of God’s word.

Did Jesus have a moment of conversion in today’s Gospel? I don’t know. But I do know that the writer of Matthew’s Gospel wanted his readers, and us, to have a conversion from seeing God’s grace as restricted to people who are, in one way or another, like us and acceptable to us. We are called to open our doors, our arms, our tables and our hearts to all embrace God’s children with the grace and love with which the Holy One has embraced us.