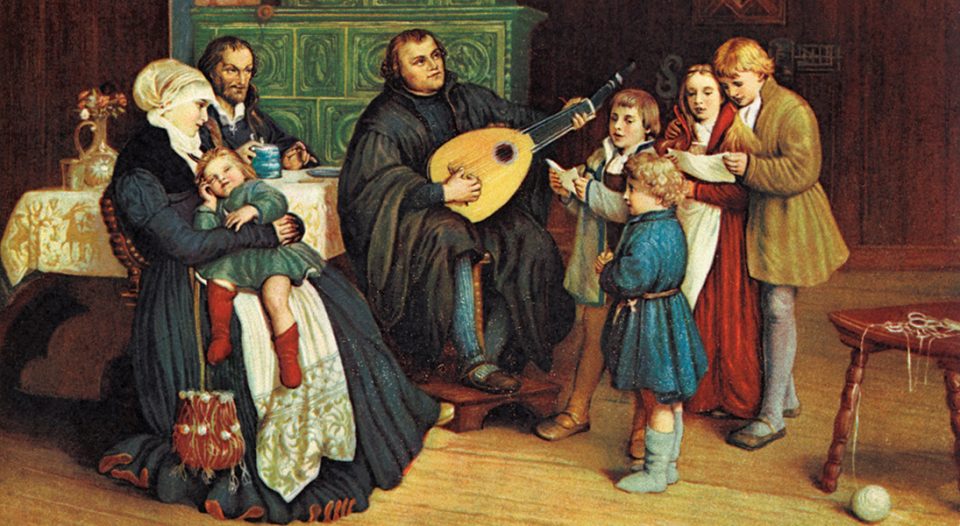 Martin Luther with his family by Gustav Spengenber.

Anyone who has hosted an unfamiliar guest knows that practicing hospitality requires a deep generosity of spirit—and an open table. Jesus instructs Christians to welcome the stranger in the same way we might welcome him, by offering them something to satisfy their hunger and quench their thirst (Matthew 25). In ELCA congregations today, we practice hospitality in several ways, many of which include sharing food and drink at an open table. How did these customs come to fruition?

Looking back 500 years into our Reformation history offers one possible explanation. Perhaps no one was better practiced in the art of holy hospitality than Katharina (Katie) von Bora Luther, Martin Luther’s wife and partner in managing their household. Welcoming a weary traveler into their midst probably meant offering a bite of food and a glass of beer—the staple drink of the times—likely one that was brewed by Katie.

What was their world like and what can we learn about hospitality from the Luthers?

From what we know, the family welcomed many. In fact, there was a waiting list to stay at the old monastery, the Black Cloister, where the Luthers made their home. But chances are they would have done their best to squeeze you in. Everyone was welcome at the Black Cloister—from students to congregants and travelers—often without charge. It was common to have 30 people housed at one time, though the two already had 10 mouths to feed, with six biological and four adopted children.

Both came from monastic backgrounds: Martin had been an Augustinian friar and Katie was an escaped nun. While a sense of community existed within their former quarters, the doors were tightly shut to the outside world. By opening their home and lives to those who needed housing, the Luthers set a precedent within the Protestant world for clergy and their families, a tradition of hospitality that continues in many congregations today. It’s fair to say that everyone who came through the doors of the Black Cloister became a member of the Luthers’ congregation, and was treated accordingly.

With a constant stream of visitors in his home, it’s likely Martin rarely ate and drank alone. Not only was beer a constant of daily life while Martin was alive, sharing it together was a way to show hospitality to one’s neighbors.

Wine and beer connected monastic people to the outside community. (Although there are only a handful of monasteries that still brew beer, in the early Middle Ages there were 400 to 500 monasteries brewing beer in Germany alone. Even after royal and city breweries came into being, the best beer was still to be found in the local monastery.) Katie was no exception—she was trained and licensed as a brewmaster at the Nimptschen convent. Once married, she began brewing for Martin, as well as growing hops in her extensive garden.

Hard work to get a good brew

In the modern world, it’s easy to romanticize what would have been a time-consuming, back-breaking process for Katie. Michelle DeRusha, author of Katharina and Martin Luther: The Radical Marriage of a Runaway Nun and a Renegade Monk, says brewing was complicated, hot and the quality of the results varied greatly depending on the batch. “[Katie] was vexed to no end when all her labor resulted in a batch that had, in Martin’s words, ‘turned to convent’—that is a weak, thin beer like that served in the monastery,” DeRusha wrote.

Einbecker beer was a favorite of Martin’s. It was sent to him as moral support before his defense at the Diet of Worms, as well as to celebrate his wedding to Katie. According to One Hundred Years of Brewing, this was the most famous beer in the Middle Ages, available all over Germany and imported as far as the Middle East. The version available in Martin’s time is described as “thin, subtle, clear, of bitter taste, has a pleasant acidity on the tongue.”

“[Katie] was vexed to no end when all her labor resulted in a batch that had, in Martin’s words, ‘turned to convent’—that is a weak, thin beer like that served in the monastery.” — Katharina and Martin Luther

That particular beer has evolved into the Bock style of beer, but the modern version isn’t much like the original, which fermented all residual sugar with several yeast strains and wild yeast from the air. It’s likely that there was a sour quality present—a result of lactic bacteria. Another difference to a modern drinker would be apparent immediately—beer wasn’t filtered and would have been cloudy.

Today’s Bocks are less complex, and they usually rely on a single yeast strain and more residual sugar (only about 75 percent are fermented, making the resulting beer sweeter). Belgian Abbey ales are perhaps the closest modern beer to one from Martin’s era. Ancient recipes allow for a taste of what Martin would have experienced during his time in the monastery and beyond.

According to Down Beer Street: History in a Pint Glass by Mika Rissanen and Juha Tahvanainen, the people in Martin’s small hometown of Eisleben drank beer all day, with every meal, drinking wine only during the weekly eucharist. Much of the reason for the sheer volume of beer consumed by early Germans was the contamination of available water, DeRusha noted. The alcohol acted as a safeguard against contaminants and even supplemented breast milk for children as young as 4 months.

While the Luthers did purchase commercially made beer (family ledgers from the 1530s show they spent 200 guldens on beer per year versus 300 guldens for meat and 50 for bread), Martin’s letters show that he was particularly fond of Katie’s home brews. While traveling he had some beer that disagreed with him and wrote to Katie: “I said to myself what good wine and beer I have at home. … You would do well to ship the whole cellar full of my wine and a bottle of your beer. Otherwise the beer here will keep me from traveling home.”

Although Martin enjoyed a beer or glass of wine, he was a great proponent of moderation and avoiding drunkenness. A quick Google search will turn up pages of “Martin Luther” quotes related to beer, but many of them are misattributed or simply fabricated.

Though beer isn’t consumed all day now, prized for its antiseptic qualities it has held onto the sense of conviviality that has long existed around tables. Five hundred years later, beer can be a symbol of an open door and a welcoming table, an invitation into community—should you so choose.

Not only was beer a constant of daily life while Martin was alive, sharing it together was a way to show hospitality to one’s neighbors.