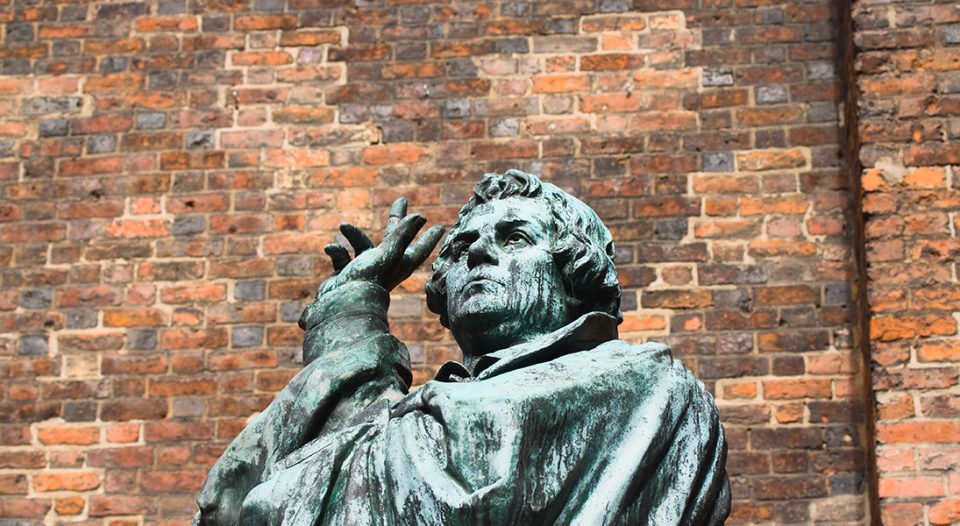 Before hammer and nails made public a challenge to practices that pulled allegiance from Christ toward the church; before the gospel’s good news flung open Martin Luther’s life; before he left law school and followed God’s call down a different path; the apostles watch as Jesus’ feet climb into heaven, their eyes transfixed upward, their fear and trepidation rising alongside Jesus as he ascends. When will Jesus come back? Where do we go from here? What are we going to do?

The angels hear their cries. When they appear to those who watch Jesus ascend from their midst, they do an amazing thing. Through their conversation with the apostles, the angels turn their gaze away from heaven and into the world. Jesus will come back, they tell the apostles. Jesus will return. “Why do you stand looking up toward heaven?”
(Acts 1:11)

The angels turn the apostles’ eyes from heaven to earth; from despair to hope; from nostalgia to resilience; from fear to forgiveness and reconciliation. Though they are to keep in mind all that Jesus had said to them, they are at the same time called to do so in the world (Matthew 28).

Reformation has a beginning, but it has no end.

In ways hidden and revealed, Jesus wakes us up to his work in the world. This, also, is reformation, that our eyes, necks, hearts and lives are turned, tuned to the beat of God’s love let loose in the world.

Reformation has a beginning, but it has no end. While in popular opinion Luther has been understood as a “rebel” for his work as a reformer, the work of reformation expands further back and continues until the end of the world.

In addition to looking up into the sky or down into the depths of hell, and sliding one’s eyes along the timelines of the world’s existence, reformation is found where it is promised: in the world God so loves. Promised in the preached word and sacraments extended, reformation reaches clear through into lives broken, hopes shattered and hearts undone by experiences of injustice, abuse, neglect, hunger, homelessness, socioeconomic inequality, racial divide.