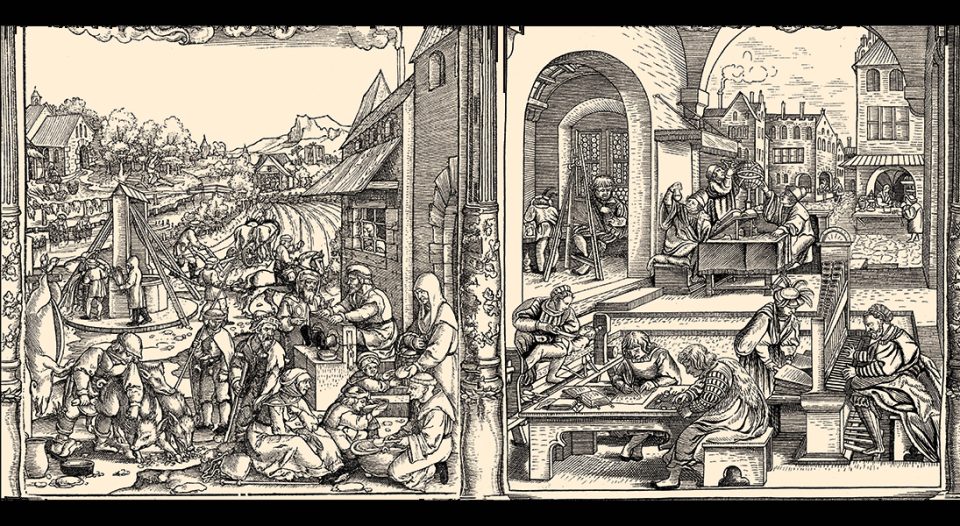 Agricultural life (on left) and city life in 16th-century Germany.

Luther’s world was characterized by much misery. Cities were growing, which brought its own problems. People fled the countryside in search of a better life, often to find that they were unqualified for the types of jobs available—merchants or craftwork. Cities often didn’t have the infrastructure for the rapid growth they experienced. Consequently people lived in unsanitary conditions that led to disease and death. People looked for hope in indulgences that would help them escape suffering in the next world even as they suffered in this world. The rulers and authorities took advantage of the poor by offering false hope.

In both urban and rural areas, large numbers of people worked very hard to achieve little and had little opportunity to move up. Literacy rates were low—perhaps as low as 5 percent for the overall population (although rates were much higher in cities). Education wasn’t widely available. Luther advocated universal education. An educated citizenry, he said, created a stronger community.

During this period a sense of a common identity began to emerge out of a collection of small kingdoms and territories. Luther and others began to think that Saxons, Pomeranians and Swabians were all part of one German nation even if they weren’t politically unified. Your neighbor, Luther said, wasn’t necessarily the person who spoke and dressed like you.

The economy was changing dramatically for many reasons, such as urbanization and the development of new technologies like the printing press. People’s lives and the world around them were changing rapidly, and it didn’t always feel like it was for the better.

Luther talked about an identity that extended beyond the local and familiar. Do we also need to think about our identity beyond our nation? Luther ministered in an era when technology and commerce were changing lives. He counseled concern, compassion and care for those marginalized in writings such as “Ordinance of Common Chest.” How might we be encouraged and inspired by his witness?

My point in mentioning identity, changing economies and education is to say that these were potent forces in Luther’s era and, I think, in our era as well. Luther talked about an identity that extended beyond the local and familiar. Do we also need to think about our identity beyond our nation? Luther ministered in an era when technology and commerce were changing lives. He counseled concern, compassion and care for those marginalized in writings such as “Ordinance of Common Chest.” How might we be encouraged and inspired by his witness?

Recent events in the United States show that even though we may have come a long way since the civil rights era of the 1950s and 1960s, we still have a way to go. Christians are called to be a reconciling people. Just as Christ has “abolished the law” to create in him “one new humanity” and reconcile all of us to God (Ephesians 2:15-16) so, too, are we called to join Christ in this work of creating “one new humanity.” Justification by grace reminds us that our identity comes as a gift from God.

The church is always reforming! None of us can know where we as a church are called to proclaim the gospel. We don’t know if we’ll be called to proclaim in words or in action. We only know that we are being called both as a church and as individuals to live faithful lives of discipleship, even while we find our hope and our identity not in what we do but in what God has done in Christ Jesus.