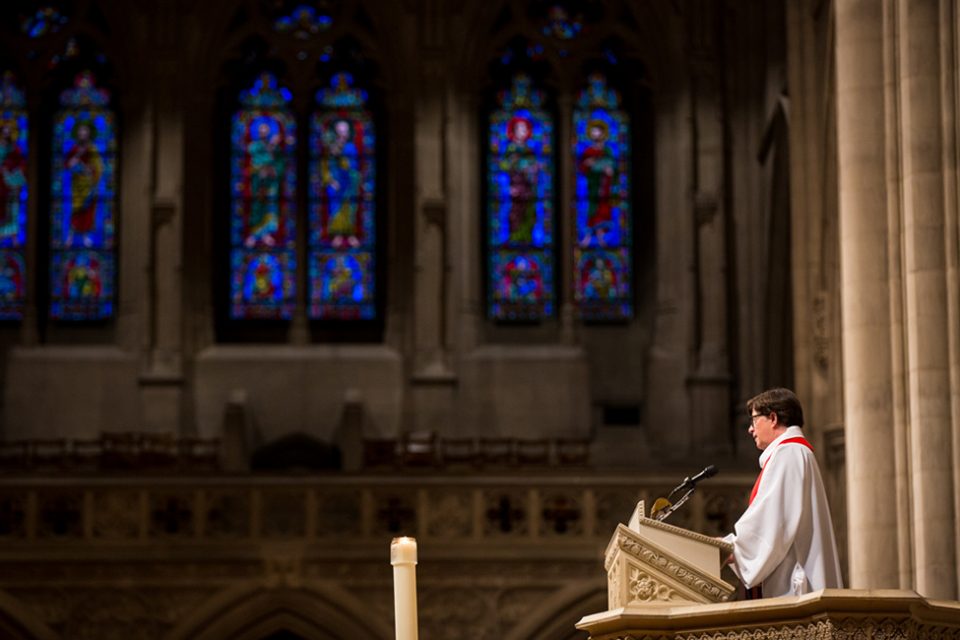 “Here we are at the 500th anniversary of the Reformation. So what?” said ELCA Presiding Bishop Elizabeth Eaton on Sunday, Oct. 29, at the Reformation Sunday worship service. She spent most of her sermon answering that question. “The truth is,” she continued, “God has given all of God’s people a message of freedom that is based on the steadfastness of God.”

The service, held at Washington National Cathedral in commemoration of the 500th anniversary of the Reformation, was sponsored by the ELCA Metropolitan Washington, D.C., Synod. The synod’s bishop, Richard Graham, presided over the service, along with Bishop Mariann Budde of the Episcopal Diocese of Washington (D.C.).

Bringing together a variety of voices and artists, worship included pre-service music on the front steps of the cathedral provided by the Ambassadors of Praise and the AfroBlue & Philly All-Stars, and in the cathedral’s nave by the Roanoke College Choir. Julio Cuellar & the Latin Ensemble also provided music during the service. Prayers of intersession were read in Amharic, Swahili, German, Oromo, Latvian and Spanish.

In her sermon, Eaton reflected on the service’s Gospel lesson, John 8:31-36: “For the past year, at least for the Lutheran movement, it has been all Reformation all the time. But I think it’s time for us to hit the reset button and hear with new ears the amazing announcement of Jesus to those who had believed in him: ‘You will know the truth, and the truth will make you free.’ These words should startle us just as much as they startled Jesus’ original hearers.”

For a moment, she said, the people who heard Jesus’ message at the time were shocked out of their frame of reference and opened up to hearing something new. “And that, I pray, is our experience this Reformation Sunday when we hear this Gospel,” she said. “Then the searing word will burn through the fog of familiarity and bring fresh good news.”

Within the Christian community, the passage has sometimes been twisted into a “loyalty oath,” Eaton said. That thinking can “force us into a new Gnosticism,” she continued, “that early heresy that said, ‘If you just knew the right stuff, the right doctrine, the right Lutheran handshake, the right practice, and stick to that, you’re going to be just fine.’ But the Gospel has a different way of telling the story of salvation.”

As the church stands at the precipice of the Reformation’s 500th anniversary, the answer to the “so what” question that Eaton asked is that God “has chosen us to tell people that there is hope in this world,” she said. “That there is meaning in our lives.”

That message, she said, is one that applies to all people—especially relevant in divided and challenging times. “There is no supremacy in the kingdom of God,” Eaton said. “We are all God’s people. So when the world sets people against people, we need to understand that justification by faith is a great leveler.

“Here’s the ‘so what,’ justification by grace assumes that we all need it; that the world is broken, and we cannot get out of this mess by ourselves.” Grace, then, is “a gift freely given by God,” she said. “It is brand-new life right now.”

In her conclusion, Eaton called on the church to remember that gift and to apply it to the way we live our lives. “This is the music that we have been set free to hear and free to sing. And I pray, for all of us gathered here, that we listen to this music of freedom and let our lives be that song in the world.”