The following is the second of two parts of Kristen’s perspective. Click here to read part 1 originally shared on Sunday, February 11. 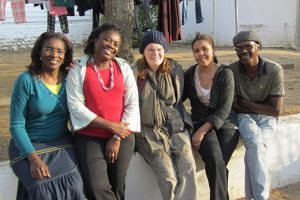 Kristen with the staff of Augsburg’s Center for Global Education and Experience house in Windhoek, Namibia, where she studied in the summer of 2003.

I returned to Africa in 2009, this time serving for nearly five years, first with the ELCA Young Adults in Global Mission (YAGM) program in KwaZulu-Natal province in South Africa and then as an ELCA missionary working alongside the Lutheran Communion in Southern Africa (LUCSA) at The Lutheran World Federation’s sub-regional office in Johannesburg.

During this time, I came to see God’s grace being lived out in so many ways. During my YAGM year, one moment stood out in particular: While I was walking home from the hospital one evening, I noticed a commotion. People from the village were running up the hillside calling out to others to come help. As I moved alongside the crowd up the hill, I saw in the distance the home of one of our congregants whose roof had collapsed. Members of the community were moving the debris and ensuring that those within the home were safe.

I think the entire village showed up that night, offering food, blankets and assistance in making sure that the family was taken care of. It was in this moment that I experienced “ubuntu” (an African philosophy of human connectedness that states that I am who I am through others) in a very real sense – the first, but certainly not the last, glimpse of human connectedness on display. When challenges arose in the communities where I lived, the members of those communities rose to meet them. When tragedies hit or loved ones died, the community was there to comfort and carry the collective pain. When joyful occasions arose, so too did the celebrations of the community. I saw God’s love being lived out in word and deed, through communal exchange – it was ubuntu as a theological expression. I realized that I had so much to learn from my host communities about living as a fully bound member of the body of Christ. It is the realization that mutuality in Christ starts with the cross and extends beyond borders and oceans.

Like other Christian denominations, the Lutheran church is seeing a shift in growth from the Northern Hemisphere to the Southern Hemisphere, with the fastest growing Lutheran churches found in Africa and Asia. The Holy Spirit continues to breathe new life into new places, around the corner and across the globe. And we, as North American Lutherans, need to listen and acknowledge that this spirit of Reformation has never been bound to a single time, place or cultural context. To claim Lutheran identity as something culturally exclusive is to reject the very nature of grace and its boundless inclusivity. There is a sacredness in the myriad ways God’s grace is experienced and expressed throughout the world. 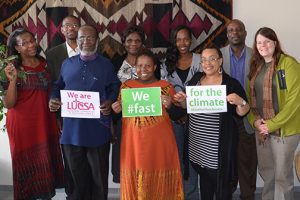 Kristen alongside her colleagues at the Lutheran Communion in Southern Africa (LUCSA). She helped organize LUCSA’s advocacy efforts during the United Nations Climate Change Conference in Durban (COP17) in 2011.

This past July I had the honor of joining 22 women from nine countries in Wittenberg, Germany, as part of the ELCA International Women Leaders seminar. We spent the week journeying with each other as we learned about the historical women of the Reformation, surveying their contributions as we reflected upon our own roles as leaders of the church today. As we shared our stories of faith, each illuminating the unique contexts from which we came, common threads began to emerge. We found comfort in the realization of what we share, while also acknowledging the differences of our experiences. We found that we are inextricably bound in boundless grace, and there is a sense of empowerment and comfort found in such a profound realization. And while we hold much in common, we have so much to learn from one another. What will the next 500 years hold as we continue this journey together?

As we move into the next 500 years of the Reformation, let us challenge ourselves to become more globally informed and transformed. As members of the ELCA, may we be challenged to a life of interdependence, listening and learning from our global companions as well as our next-door neighbors. Programs and movements within our church such as AMMPARO, Racial Justice Ministries and #DecolonizeLutheranism can propel us into necessary conversations about privilege, injustice, equity and mutuality. These can serve as catalysts to a more immersed sense of God’s larger story. As we engage in this layered conversation of faith, may we look at the Luther rose in new ways, peeling back it’s petals in order to better understand our collective and diverse identity in Christ. What began with an idea, a piece of paper and a hammer nearly 500 years ago has blossomed into a global movement that continues to be transformed and articulated through the unique cultures in which it takes root. What started as a small shrub in Wittenberg 500 years ago has blossomed into a global flower.

Listen, God is calling – calling us to the cross so that we might better understand one another, each of us a part of God’s collective story.