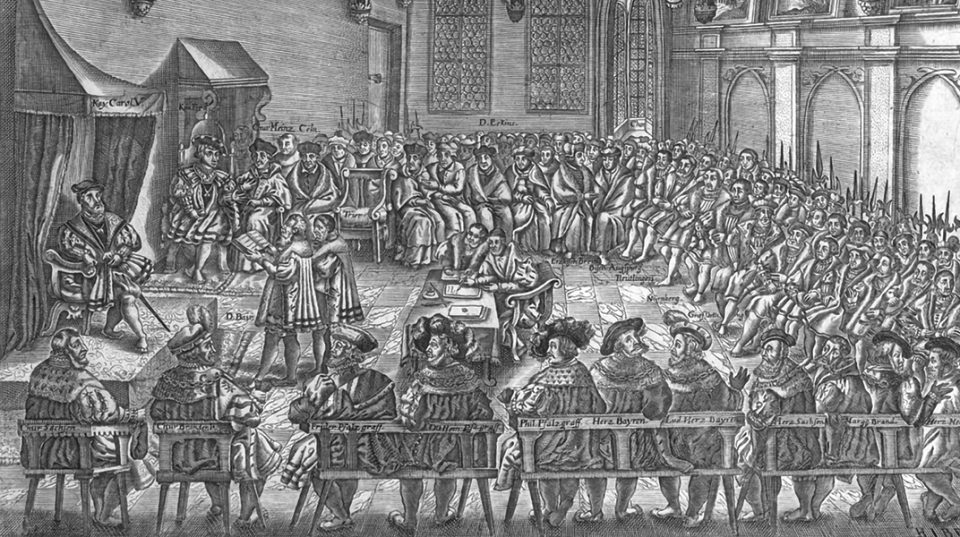 The ELCA claims to be a biblical, creedal and confessional community whose faith, life and mission are shaped by Scripture, the ecumenical creeds and the Lutheran confessional writings of the 16th century. Of the latter, the Augsburg Confession is generally viewed as the most important and influential confessional document, with the possible exception of the Small Catechism.

The confession was presented to the Diet of Augsburg, an assembly of political leaders in the Holy Roman Empire, on June 25, 1530. Philipp Melanchthon, Martin Luther’s most influential colleague in Wittenberg, composed the document since Luther couldn’t attend the Diet because he had been declared a heretic and outlaw by the ecclesiastical and imperial leadership. While it was specifically the confession of faith of the Lutheran movement’s political leaders, it was intended to clarify the theological commitments of the whole evangelical community in Germany. The confession was signed by seven princes and by representatives of two cities, Nürnberg and Reutlingen.

The Augsburg Confession is held in high esteem by Lutherans because it is deemed to be a catholic confession that explicates and defends essential truths of the Christian faith. Melanchthon intentionally stressed the catholicity of the Lutheran position throughout the document, particularly because Luther’s supporters were accused of heresy. Therefore, he insisted that the Lutherans—or “Evangelicals,” as they preferred to be called—were loyal members of the one, holy, catholic and apostolic church.

The Augsburg Confession thus claims to profess the orthodox faith, and it intentionally seeks to foster the resolution of the theological conflicts that divided the church in Europe during the 16th century. Its commemoration on June 25 serves as a persistent reminder to the spiritual heirs of the Augsburg confessors that a catholic consciousness, the quest for the unity of the church and ecumenical endeavors should continue to be clear priorities of Christians whose faith and ecclesiastical identity has been shaped by the Augsburg Confession. The Lutheran community is still called to be a confessing, reforming and unifying movement within the church catholic.

The Evangelicals also sought to make a bold confession of their faith in the Augsburg Confession, and they were keenly aware that doing so was fraught with much danger. Emperor Charles V had promised to defend the church in his coronation oath. When he concluded at the Diet of Augsburg that the papacy and its defenders, rather than the Evangelicals, represented the true church, he threatened military action against the latter if they didn’t submit to the authority of the pope. Despite this threat, the Evangelical confessors refused to recant or heed the emperor’s command because they were convinced their theology was consistent with Scripture and, hence, faithful to Christ. They were willing to face suffering and even the potential loss of their lives for the sake of the gospel.

The commemoration of the Augsburg Confession invites Lutherans today to make their faithful confession as they address the diverse crises in their contemporary church and world. Such a witness may involve risk in the 21st century as well, but this is still the calling of God’s people.

The commemoration of the Augsburg Confession invites Lutherans today to make their faithful confession as they address the diverse crises in their contemporary church and world. Such a witness may involve risk in the 21st century as well, but this is still the calling of God’s people.

What is it that contemporary Lutherans are to confess? The commemoration of the Augsburg Confession also answers this question and clarifies the ultimate vocation of God’s people.

The priority of the Evangelicals at the Diet of Augsburg was to make a clear witness of Christ by proclaiming the gospel faithfully. They insisted that the gospel is the radical good news of God’s grace and love manifest particularly in Jesus Christ. Having been renewed and strengthened by the Spirit through Luther’s bold proclamation of the gospel, they eagerly sought to share and defend it against teachings or practices of the church that they considered to be compromises of the gospel.

They especially focused on the doctrine of justification by grace through faith for the sake of Christ and apart from works because they were convinced it was a faithful exposition and witness of God’s good news. Most importantly, therefore, the commemoration of the Augsburg Confession reminds evangelical Lutheran Christians of their ultimate calling—namely, to be Christ’s witnesses.

Like the confessors at Augsburg, they are privileged to proclaim the gospel with the assurance and trust that it is God’s gracious word of forgiveness, wholeness, freedom and love to the whole creation. There is no greater gift that people of faith can share, no more powerful message of hope and transformation that they can proclaim, no greater loving service of God and of the neighbor that they can render, no more sincere thanksgiving to God that they can express. This is what the confessors at Augsburg believed and experienced, and this is the legacy that they continue to share with their spiritual heirs.