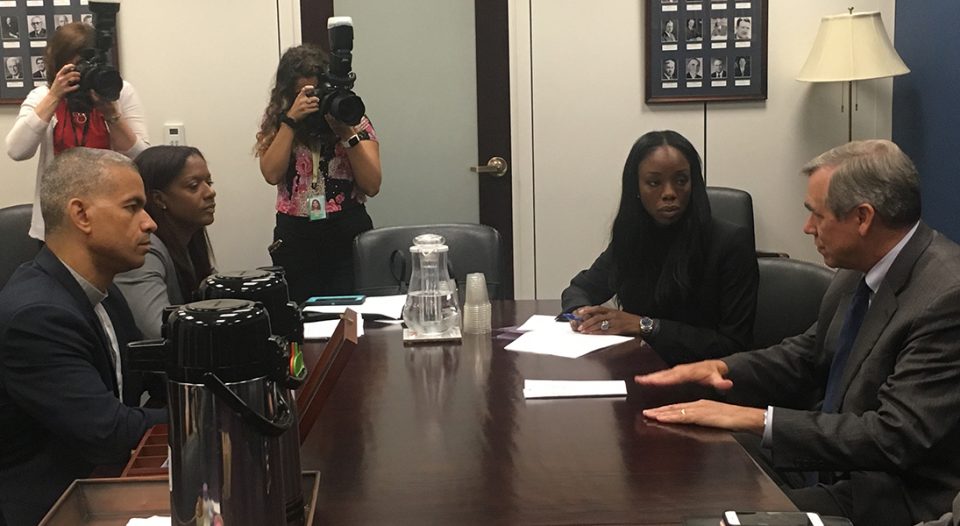 Editor’s note: The following is a testimony given by ELCA pastor and professor Carmelo Santos before the U.S. Senate Democratic Policy and Communications Committee on June 27. The hearing addressed the effects of the Trump administration’s family separation policy on the U.S.-Mexican border. The full hearing is available for viewing here.

Good afternoon. Thank you for holding this hearing on the issue of the separation of children from their parents and the indefinite detention of families seeking asylum on our borders. I come before you today as a pastor and as a theologian but also as a father and as a citizen to express my concern about the well-being of these children and to voice my opposition against what seems to me to be a cruel and inhumane way of treating asylum seekers. I believe these policies are not just illegal according to international law but also morally abhorrent and a clear departure from the values that are supposed to be the bedrock on which this country is built. I would like to use this opportunity to share with you a brief ethical and theological analysis of why these policies are immoral and must stop.

As a teacher and preacher, I think in metaphors and parables. Allow me to share with you one such parable that I have found helpful in understanding and explaining the current situation (a thought experiment, if you wish).

Suppose that my neighbor’s house is on fire and the only way out is through my yard. Now imagine that my neighbor not only jumps the fence onto my property with her children but also comes and knocks on my door to ask for help. What if my response, rather than helping them, is to call the police on them because they have clearly broken the law and invaded my property? If they needed help, they should have called 911, I say, not invade my property.

Our neighbors’ houses are on fire, and they are knocking at our doors asking for help. The flames consuming their homes might not be those of literal fire, but they are as destructive – they are the flames of gang violence, of extreme poverty, and the terrible threats and reality of sexual violence even against their youngest daughters and sons. They are knocking at our doors after having been through hell in order to get here, and now, instead of listening to their plight and helping them, we are detaining them like criminals and snatching their children from them, piling up violence upon violence, and we were supposed to be the good guys! After all, we have right next to our fence a big statue with an invitation that reads:

Give me your tired, your poor, your huddled masses yearning to breathe free, the wretched refuse of your teeming shore. Send these, the homeless, tempest tossed to me, I lift my lamp beside the golden door!

We are dangerously drifting away from those beautiful values of compassion, mercy, fair play, hard work and justice upon which this nation is founded. In this process of shifting from a country that prides itself on its values of welcoming refugees and immigrants to a country that views them with suspicion and treats them as criminals, even children, the Bible has been invoked. Therefore, since the Bible is such a powerful book, it is important to reflect carefully on its proper and improper use.

In my evangelical Lutheran tradition, the Bible is considered the norm and rule of faith and practice, but it is also understood that it stands in need of careful study and prayerful interpretation. Otherwise, it becomes a dangerous book that can and has been used to justify horrible acts of violence and the systematic oppression of entire groups of peoples. The Bible has texts that can certainly be used for those purposes, but you should know that within the Bible itself there is also a corrective tradition against such misuses and abuses. Theologians refer to that corrective as the prophetic. Prophets were not seers of the future like Nostradamus. Prophets were messengers sent by God to the people when they were drifting away from the ways of mercy and justice. Their message disclosed God’s passionate concern for the most vulnerable members of society (in biblical times they were usually the poor, the widows, the orphans and the foreigners). The words of the prophets are often harsh and provocative; here is an example from the prophet Isaiah, speaking about a situation not too different than our own but thousands of years ago. This is what he said:

Woe to those who make unjust laws, to those who issue oppressive decrees, to deprive the poor of their rights and withhold justice from the oppressed of my people, making widows their prey and robbing the fatherless. What will you do on the day of reckoning, when disaster comes from afar? To whom will you run for help? Where will you leave your riches? Nothing will remain but to cringe among the captives or fall among the slain (Isaiah 10:1-4a NIV).

Those are harsh words from the prophet, but they display the ethical-prophetic core of the Bible. The ultimate purpose of the prophet, of course, is to move the people to repentance so that they will return to the way of mercy and justice and become once again a blessing to the nations (e.g., Ezekiel 18:23 and Jonah 3:10).

The same emphasis on mercy is found in the way that Jesus interpreted the Bible in making moral decisions. When a woman is brought before him who had been caught in adultery, he knew that the law was very clear on the matter, and yet he chose mercy rather than the indiscriminate application of the law, which would have cost her life (John 8:1-11). She was guilty, but Christ chose mercy. That is in fact the very heart of Christianity, that instead of applying the full weight of the law that our sins deserve, Christ chose mercy instead and offered himself as a sacrifice for all humanity, even his enemies.

Going back to my thought experiment about my neighbor’s house on fire, what then would be the moral thing to do in that case? Isn’t the ultimate purpose of the law to ensure the well-being of the people, what ethicists call the common good? Moreover, what if it turns out that the reason that my neighbor’s house is on fire was because of a cigarette that I had been smoking the night before and threw out the window and into their yard, not realizing that their grass was dry and combustible? Am I wrong to assume that a contributing factor (among many others) to the fire burning in these countries has been U.S. interventions both direct and indirect (whether justified or not is a matter for another time). I find it ironic that it is thanks to those foreign interventions that today I, a Puerto Rican-born U.S. American citizen get to be here before you and then go home to my family while my sisters and brothers born by chance elsewhere, no less smart, kind or capable than me, are in cages right now and heartbroken wondering where their children are. What is happening to these children and to these families is unjust, morally unjustifiable and must stop.

Finally, I want to leave you with an often quoted but seldom practiced biblical saying:

Thank you for your time.

Carmelo Santos
Carmelo Santos is ELCA director for theological diversity and ecumenical and interreligious engagement in the Office of the Presiding Bishop.