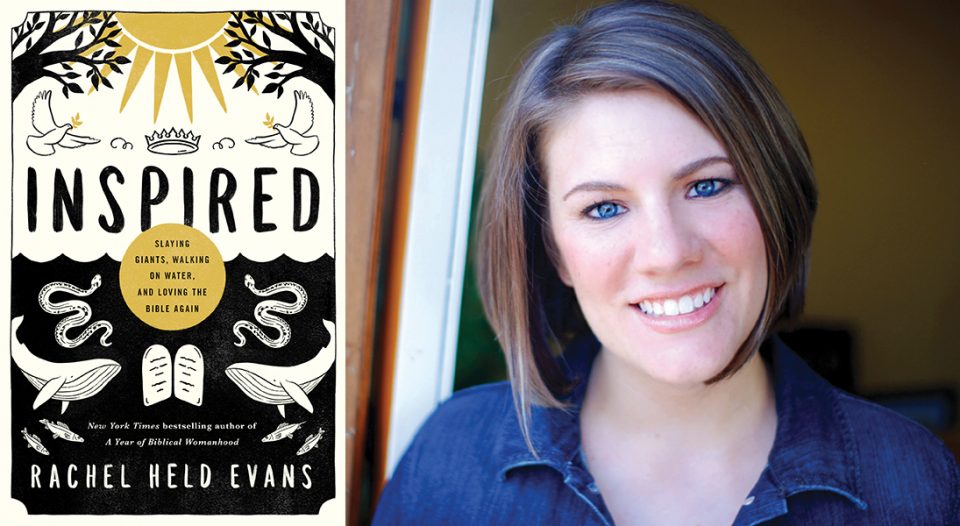 Growing up as an evangelical Christian in the Bible Belt, Rachel Held Evans used to love reading the Bible. But as her faith changed, she grew weary of the black-and-white interpretation of her youth. As an adult, she joined the Episcopal Church and began to consider other ways to read Scripture. Her new book, Inspired: Slaying Giants, Walking on Water, and Loving the Bible Again (Thomas Nelson, 2018), is a memoir mixed with scholarship and literary analysis, including reimagining parts of the Bible as short stories, poetry and even a “Choose Your Own Adventure” story.

Living Lutheran spoke with Evans about her book and the new ways she has found to engage Scripture.

Living Lutheran: What are your favorite parts of the Bible?

Evans: I love the gospel story, but I also really love wisdom literature. I love Ecclesiastes, Job, Song of Songs, Proverbs. Job is a strikingly beautiful poem—one of the oldest wrestlings with one of the oldest questions of humanity, which is “Why do bad things happen to good people?” It answers it in this very, sometimes, unsatisfactory way, but in a way that really captures my imagination.

I love what wisdom literature invites us into, and how much it reflects so much of the rest of the Bible, in that big questions about life and God and our relationship with God are answered in the form of stories and proverbs and poems and riddles—not usually directly, [as] we might like. The wisdom stories capture what the Bible is like and show us that we have to read the Bible and engage the Bible from a posture of wisdom because it doesn’t always spell everything out for us.

In the book, you write about how your relationship with the Bible has changed as you have moved from the faith of your youth to the Episcopal church where you currently worship. Would you talk about that?

Growing up, I was a Bible nerd. I had large portions of the book of Romans memorized before I was 11 years old. I grew up an evangelical Christian with a pretty solid understanding of the content of Scripture and could find my way around the Bible very easily. I’m grateful for the gift of Bible knowledge that evangelicalism gave me, but I also had a posture towards the Bible that it had to be defended at all costs, that it was constantly under assault. I had an attitude that I had to defend the Bible as historically and scientifically accurate, as inerrant and infallible, and internally consistent. I was very busy, especially in my youth, defending a Bible that didn’t exist—because the Bible is not always consistent, and isn’t always easy to understand, and it’s not primarily science and history. There’s quite a few other genres represented in the Bible that don’t easily turn into an owner’s manual or an answer book or a position paper.

When I was in college, and shortly after, I started questioning the Bible and began wrestling with some of those very troubling stories about God commanding genocide or that reflected a patriarchal and misogynistic culture, and stories like Genesis 1 and 2, that I had been told were science, but didn’t read like science, and didn’t align with what we understand about how the world came to be. I went through your classic faith crisis—I began to doubt and question and wrestle with the Bible, and that led me to scholars and postures that helped me understand the Bible better. For instance, engaging Jewish interpretations of Scripture really changed how I approach the Bible; engaging womanist interpretations of Scripture; engaging it from different people’s perspectives kind of brought it back to life for me slowly but surely over time. I don’t have answers to all of those questions, and I’m not interested in trying to tidy up the Bible for people for whom it’s still, in many places, quite troubling and challenging. But I learned to make peace with the Bible as it is—not what I want it to be.

I learned to make peace with the Bible as it is—not what I want it to be.

You were deeply immersed in the Bible from a young age, but that isn’t always the case for those who grew up in the mainline church. How do you encourage Lutherans to engage with Scripture?

Sometimes, in mainline traditions, we encounter lots of Scripture in the liturgy, but we don’t always stop to investigate those passages of Scripture. Every now and then, it’s a weird one. We’re singing through the psalm of the day, and it’s like, “Oh, that their heads would be bashed against the rocks,” just glossing over these violent or odd texts. I encourage mainline pastors, church leaders and teachers: go there. Investigate those passages with your congregations.

I wanted to help Sunday school teachers, pastors, church teachers and leaders introduce their congregations to biblical interpretation in a really accessible way—through a memoir that includes stories and that walks people through the various genres of Scripture. If we understand the genres that we’re dealing with—why those genres were used and the context in which they were written—we get a much better sense of what’s happening in Scripture. A lot of that is stuff pastors learn in seminary, but they don’t always get the opportunity to translate that to their congregation.

What has been the greatest surprise for you about approaching the Bible in this new way?

Just thinking about the way Jewish interpreters approach the text has been really delightful for me. I’ve begun studying midrash and reading some Jewish commentaries, and there’s just so much more room to play, imagine, debate, guess and surmise. When you grow up learning that the Bible means one thing and every story has one meaning, and the goal is to find that meaning and then argue for it, to be immersed in this whole different way of engaging the Bible—where you’re encouraged to ask questions, to challenge and to read between the lines—has been surprisingly refreshing to me.

It’s helping me engage the Bible almost how I engaged it when I was a child—with my imagination connected and my questions engaged. It frees you up from the fear of “I have to get this right.” I wish more Christians would adopt that posture of the Bible [being] a conversation-starter, not a conversation-ender; that we would go to the text looking for conversation and community and debate, not just ammunition to win theological arguments or political arguments.

What are you hoping readers take away from your book?

My main hope is that people come away with an insatiable need to engage the Bible more. I hope I pique people’s interest and make them curious. For a Lutheran audience—more than any book I’ve ever written—I do hope that this one will be engaged in the context of communities, where people talk about it together and go back to the Bible together to investigate these various texts. …. I hope it will help pastors and church leaders who are wanting to introduce their congregations to how they interpret the Bible, and to biblical criticism and scholarship.