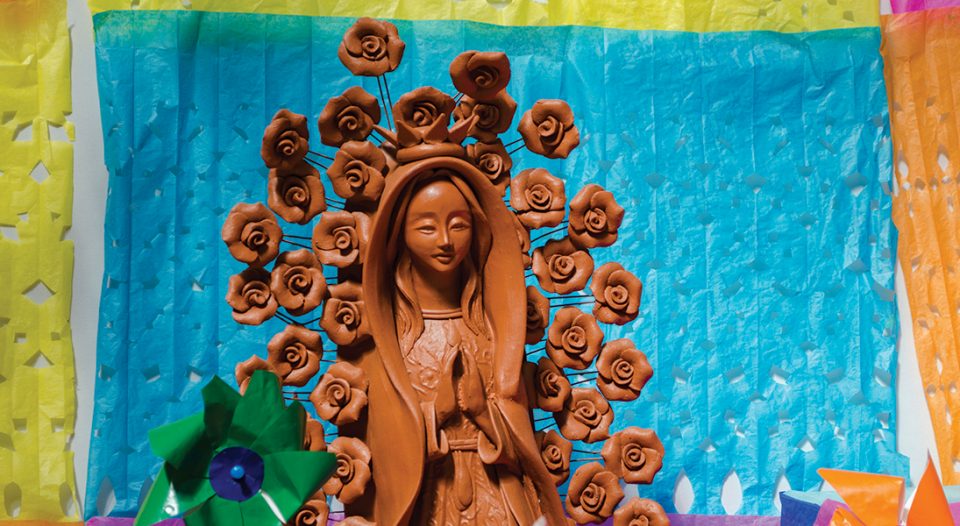 Virgin made of clay. Part of a mexican Day of the dead offering altar

Series editor’s note: This month’s article continues our series on texts and themes related to our common Lutheran worship with this explanation of Mary, Mother of Our Lord, who is commemorated on Aug. 15. Next month we will continue with a reflection on John Chrysostom, bishop of Constantinople. —David Ratke, dean, College of Theology, Lenoir-Rhyne University, Hickory, N.C.

In our Lutheran calendar, the principal festival of Mary is “Mary, Mother of Our Lord” on Aug. 15. The “of Our Lord” speaks to Mary’s role as the mother of Jesus in the Gospel narrative and as the mother of God in eternity. In 431 the Council of Ephesus proclaimed Mary as the theotokos, the God-bearer. This claim emphasizes the union of the two natures of Christ in one person when Mary gave birth
to Jesus.

A year before his translation of the New Testament, Martin Luther completed his commentary on the Magnificat, Mary’s song from Luke’s Gospel that served as the main canticle of the Evening Prayer. Luther saw Mary’s song as a model for Christian prayer and praise, not dependent on merit but rather in response to God’s grace. God had chosen her for such an important role in the history of salvation, one that turns everything on its head. Thus, Christians are to respect and venerate Mary because of her faith, humility and willingness.

Luther identifies six works of God in the Magnificat: mercy, breaking spiritual pride, putting down the mighty, exalting the lowly, authoring trust and giving good things (what he usually identifies as “life, forgiveness and salvation”).

Luther identifies six works of God in the Magnificat: mercy, breaking spiritual pride, putting down the mighty, exalting the lowly, authoring trust and giving good things (what he usually identifies as “life, forgiveness and salvation”). All six of these works find their origin in and point to the Incarnation, which is God’s greatest work and from which we receive salvation and its benefits through no merit of our own.
The Magnificat is where we encounter Mary most regularly. Evangelical Lutheran Worship (ELW) contains six versions of it. Lutherans experience Mary in four other ways during worship: the creeds, lectionary readings, hymns and images. Joining with other Christians weekly, Lutherans say Mary’s name in professing their faith through the creeds.

Mary is featured in the Gospel readings for Christmas and Epiphany, as well as the Annunciation (March 25) and Visitation (May 31). She also appears on the fourth Sunday of Advent for all three lectionary cycles, and the Magnificat is used in place of the Psalm on that Sunday or on the third. Mary also appears in John’s account of the Passion read annually on Good Friday, where Jesus from the cross establishes a relationship between her and the beloved disciple. For that reason, tradition holds that Mary was present with the apostles at Pentecost. Mary also appears in at least three other lectionary readings amid Jesus’ ministry.

Including the versions of the Magnificat, Mary is mentioned (either by name or by role/title) in 38 hymns in ELW (including six Advent and 12 Christmas hymns). The Lutheran Book of Worship included the Stabat Mater (“At the Cross Her Station Keeping”), in which the singer accompanies Mary at the cross in sorrow over her son’s death. This hymn, which is not in the ELW, speaks of real motherly emotions during tragedy and loss, but it doesn’t elevate Mary to some pious ideal.

Both in churches and popular culture, Mary has been the focus of religious art. Some Lutheran congregations contain icons or statues of Mary, often holding the infant Jesus to solidify her connection to the Incarnation. Mary’s appearances over the centuries have made her embedded in particular contexts and geographies. Many people see Mary because of her connection to God’s mercy to the humble and poor. These various “Our Lady of …” speak to the reality of God’s mercy being made manifest worldwide. Our Lady of Guadalupe (Dec. 12), one of the most popular Marys in America, exemplifies this fact and should have a role among Lutherans, especially in Latino communities.

A recent example is the icon commissioned by Trinity (Episcopal) Church Wall Street: “Our Lady of Ferguson and All Those Killed by Gun Violence.” Mary’s posture is one of prayer, while on her womb is the silhouette of Jesus in the crosshairs of a gun. As in the Magnificat, this icon lifts up God’s mercy by speaking truth to the violence caused by injustice. Here, Mary is a true theologian of the cross, pointing to God who stands alongside the suffering and targeted, calling out sin for what it is.

In his Little Prayer Book (a prototype of the Small Catechism), Luther includes the Hail Mary by stating: “Let not our hearts cling to her in faith, but through her penetrate to Christ and to God himself. Thus, what the Hail Mary says is that all glory should be given to God, using these words: ‘Hail, Mary, full of grace. The Lord is with you; blessed are you among women and blessed is the fruit of thy body, Jesus Christ. Amen.’ ” Let us join with the Queen of Heaven and Mother of God to give thanks and praise to God through whose mercy and grace we are freed to care for our neighbors.