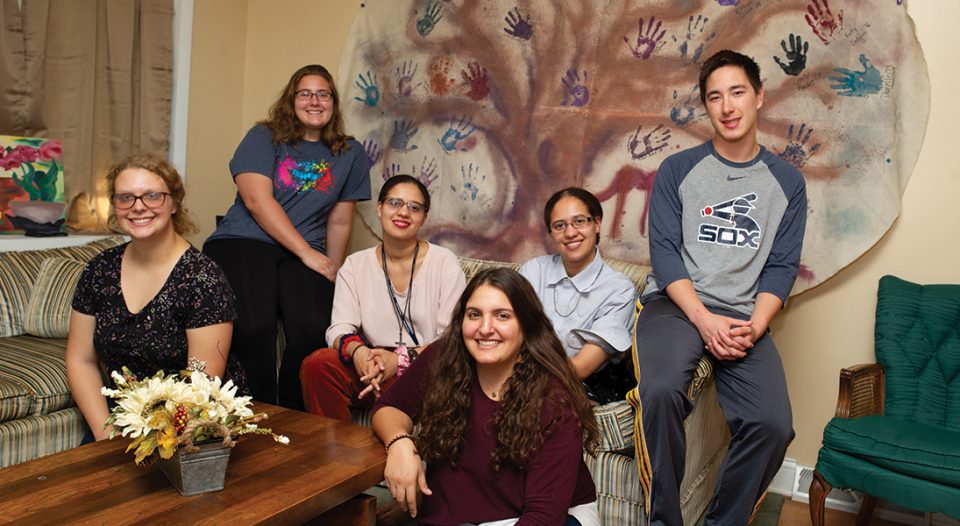 As a junior at Augustana College in Rock Island, Ill., Samira Radi frequently hung out at Micah House, where one of her closest friends lived.

Radi, a Catholic, was captivated by the concept that seniors of different faiths would live in the house with the intention of growing in their faith together and serving the community.

Micah House, which opened to the first group of students in fall 2012, is formed around the words of Micah 6:8: “What does the Lord require of you but to do justice, and to love kindness, and to walk humbly with your God?”

As a senior this year, Radi no longer visits Micah House—the biology major has taken up residence.

“The idea of exploring spirituality and faith with others was one of the things that caught my eye,” Radi said. “Communication is essential and being mindful of those surrounding you is very important. It’s important to compromise and look at the bigger picture with the goal of making everybody live in a space where they can share their thoughts without judgment and be comfortable.”

Micah House is a partnership between St. John Lutheran Church, Rock Island, and Augustana. In 2011, St. John purchased the house, which is two doors down from its building. The house is located at the border of two diverse neighborhoods—Keystone in Rock Island and Floreciente in Moline, Ill.

“When the property became available, the pastor [of St. John], Stacie Fidlar, contacted me at Augustana and we began dreaming,” Mahn said. “Within a short time, after meeting with students and church members, we had a proposal to Augustana’s president, Steve Bahls, for a house in which a group of Augustana seniors would live with the intention of growing in their faith together and serving the community in which they live.”

The students have been of different faiths, including Muslims, spiritual seekers, Roman Catholics, Buddhists from Sri Lanka, ELCA members and others.

Service has included everything from informally hanging out at the elementary school basketball hoop with kids once per week, helping with St. John’s Sunday school, and formal internships with World Relief Moline or the neighborhood association.

Once per week, students gather for a meal, and every month they invite community members, outside guests or people from Augustana, said Jason Mahn, an associate professor of religion and director of the Presidential Center for Faith and Learning at Augustana.

“This can be a struggle,” said Jason Mahn, who has helped with programming and incorporating teaching and learning into Micah House’s mission. “Students are not used to carving time for preparing and enjoying meals together in the same way that they would carve time for homework or other socializing. We hope that they come to consider meals together and with neighbors an important ministry—something that very few college-age students can or will do.”

By living and working so closely with others from different religious traditions, students quickly get below the “ ‘it’s all good’ shallow relativism so common in college kids,” he said.

“It’s one thing to be accepting of everyone and anyone in theory,” he added. “It’s another thing to be asked to share your faith story with those who go to a mosque rather than a church, or to discuss spirituality and even learn how to pray with those for whom prayer looks so different.”

Grace Koleczek lived in Micah House during her senior year and now works at a Catholic church in Roseville, Minn. “Service had been a huge aspect of my faith life, so it felt natural to be in a community that connected faith and service too,” she said. “I keep finding that my year in Micah House formed me in ways I couldn’t have realized at the time and am still uncovering.”

Koleczek said she has many memories of her time there—sitting around the dining table doing homework, walking to classes, cooking meals and “being surprisingly full of joy while at Micah House.”

“It also opened me up to the value and importance of vulnerability in relationships and faith,” she added. “I wouldn’t be who I am now without having been part of Micah House.”