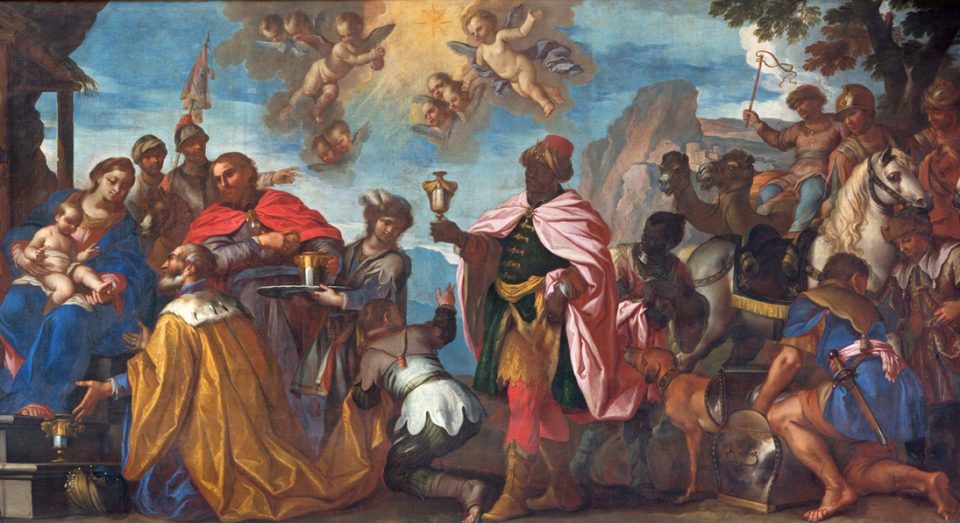 Padua - The paint of the Adoration of Magi scene in Cathedral of Santa Maria Assunta (Duomo) by Francesco Zanella (1671 - 1717).

The first Sunday of the calendar year we celebrate by remembering and looking forward to the radical inclusivity of Jesus’ kingdom. The story of the magi coming to visit Jesus is famous and associated with the Christmas story, but I love how the other lectionary readings paint an even fuller picture of the reconciliation that comes with the birth and reign of Jesus.

The Isaiah passage lists people, as represented by national animals, who will stream to the new Light that the Lord will cause to shine upon the reconstituted people of Israel (Isaiah 60:1, 3). The “camels” of Midian, Ephah and Sheba will come, bringing gold and frankincense, and proclaiming the praise of the Lord (Isaiah 60:6). The people in view lived in today’s Jordan, Saudi Arabia, Oman, Yemen and Somalia, roughly. I remember my first trip to Oman, scraping the resin that is made into frankincense from the gnarled trees, and thinking what a long journey the sticky sap, and the people who carried it, must have made across the Arabian peninsula to where it was sold in the Levant (Exodus 30:34, Leviticus 2:1). Instead of economic motivation, Isaiah looked forward to a day when people would come to worship God.

The next verse, not part of the lectionary, adds that Kedar and Nebaioth (both of whom were central Arabian tribes) will also join the procession to minister, and they will be fully acceptable in God’s house (Isaiah 60:7). The Psalm reading for this week also spoke of the rulers Sheba and Seba coming to bring gifts and bow before God’s anointed king (Psalm 72:10-11).

Midian, Ephah, Sheba, Seba, Kedar and Nebaioth were all descendants of Abraham, but through Hagar (Genesis 25:13) and Keturah (Genesis 25:2-4), rather than Sarah. Abraham had sent all his other descendants away from Isaac so they would not share his inheritance. In time, these tribes had become followers of other gods and the Israelites’ mortal enemies. But God, through the dawning of the Light, gathered together what man had separated. Abraham sent away his sons, but God gathers together all God’s children.

But God, through the dawning of the Light, gathered together what man had separated. Abraham sent away his sons, but God gathers together all God’s children.

But God, through the dawning of the Light, gathered together what man had separated. Abraham sent away his sons, but God gathers together all God’s children.The lectionary passages argue that these people will sojourn to meet God, not because of great majesty, but because of justice and righteousness (Psalm 72:1-2). God’s anointed leader will defend the poor, give deliverance to the needy and crush their oppressor (Psalm 72:3, 11-14). For the psalmist, the most attractive aspect of the ruler of the kingdom of heaven is not wealth or even power, but the righteous protection and provision received of the poor, and the justice meted out to those who oppress them. This is the kingdom we pray to come when we ask for God’s will to be done on earth as it is in heaven.

So, then, we turn to a modest dwelling in Bethlehem. After the census was over and everyone else went home, Joseph, Mary and Jesus had finally moved from their semiprivate and relatively warm stable (think of an insulated garage) and had been welcomed into the guestroom/kataluma (note that Luke’s Gospel uses a different word, pandeion for “inn” in 10:34). This room would have been overflowing during the census with Joseph’s extended family, but available after they left. The family had come in from the stable to the main house, but they are still by no means wealthy, powerful or important from an earthly perspective.

But magi, Zoroastrian religious professionals, showed up to this humble home bearing gifts fit for a king. The scene must have been utterly incongruous as their wealth and foreign appearance clashed with the holy family’s local modesty. The magi represented the firstfruits of fulfillment of prophesies from Isaiah and Psalms that people from east of the Holy Land would travel to see the ruler of God’s kingdom. They visited Herod, that great builder and influential client of the Romans, but only to ask him for directions to the child who would proclaim peace, neighbor-love, humility and allegiance to God’s kingdom over earthly powers. He would be killed by the empire for doing so. The magi came to honor a humble child, not a wealthy and influential tyrant.

The readings this week could not be clearer about how to think about Epiphany. God reunites and welcomes the people whom humans have sent away. God attracts not through wealth or power, but through justice and righteousness on behalf of the poor and needy. The fulfillment of God’s will as spoken through the prophet is when people who come from different ethnic, national and even religious backgrounds are welcomed and appreciated at the end of their holy journeys.