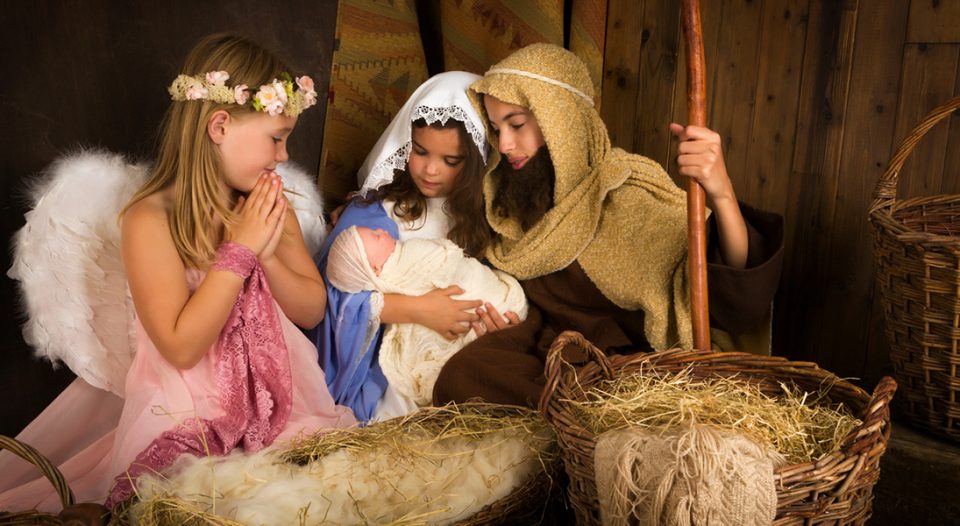 My daughter, Charlotte, could have chimed in with the cows shouting, “Moo!”
But that’s where her animal sounds end.

As she stood on the pew watching the Christmas Eve pageant with the children telling the story of Jesus’ birth, I thought: “She could be up there.”

She goes to Sunday school with the preschool class, those 3- and 4-year-olds dressed as stable animals for the pageant. She loves animals, music and dressing up. So often she is the center of attention with her outgoing and joyous personality. But she wasn’t up front with the other children.

She didn’t wear a cute animal costume with ears and a tail. She didn’t shout animal sounds. She didn’t sing. Instead, she was watching, full of awe and excitement. If she was in the pageant she could have yelled, “Moo,” and then she would be done. She can’t say any more words or animal sounds—at least that can be discerned. She doesn’t yet talk in full sentences or sing.

Right now I don’t stay awake stressing over my daughter’s speech delay. I’m faced with it every day and it’s never far from my mind, but I don’t dwell on it.

In my sadness at not seeing my daughter participate in the pageant, I almost missed her demonstrating that same story—love coming down. Love reaching out for us and for the world.

I know there are experiences that she won’t have yet. I know our trajectory to speech and understanding will go in different directions. I know I have to do a lot of translating for others regarding my daughter’s wants and needs. Still, when I saw all her friends singing their hearts out on Christmas Eve, part of my heart felt sad. And not necessarily for Charlotte who cheered and beamed throughout the program. Not for Charlotte who clearly was communicating the heart of the night through her joy and awe. But more for myself, her mama who still needs reminders that her daughter develops on her own timetable. That her daughter is and will have to continue to work harder repeating sounds over and over and learning how to form her mouth to speak. But lest I feel too sad, I turn to look at my daughter.

Throughout the service she embraces her brother and kisses him softly. On Christmas Eve the children were telling us the Christmas story, they were sharing about love coming down, of Jesus being born. In my sadness at not seeing my daughter participate in the pageant, I almost missed her demonstrating that same story—love coming down. Love reaching out for us and for the world.

The arms of love wrapping around a baby.

Maybe next year Charlotte will be able to say more than “Moo” for the pageant. But maybe not. If I’m learning anything at all through my daughter’s speech delay and time in therapy, it’s that you can’t measure her progress in time. It’s measured in small steps taken daily, over and over again.

Next year her brother will be more mobile. He will be able to free himself from her hugs and kisses. But I trust that he and I will still know the power in her unspoken words, the power of outstretched arms embracing us in love.