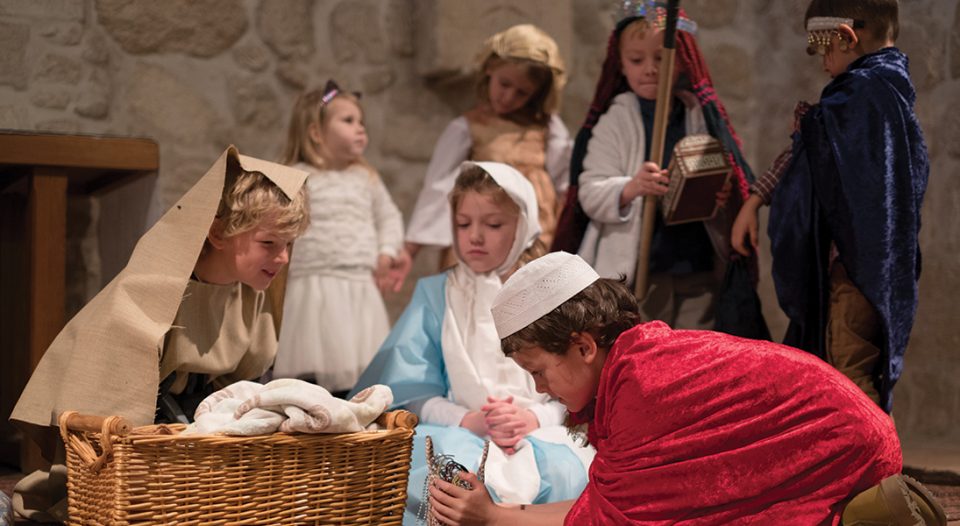 Christmas pagent at the Lutheran Church of the Redeemer's English-speaking congregation in Jerusalem. Photo by Ben Gray / ELCJHL

Christmas pageants rank high among iconic traditions of the holy season of Jesus’ birth—Advent candles, Moravian stars, crèche (nativity) scenes and Chrismons on the tree. But unlike those other symbols of the season, pageants involve children, who are notoriously prone to going off-script. There are also the occasional animals, who follow their own stage directions.

When you put together such capricious creatures and ask them to act out the Christmas story, all sorts of crazy stuff can happen. That principle was certainly borne out when Living Lutheran invited readers to share their stories of memorable Christmas pageants.

Shepherds heard the call of the herald angels to go to Bethlehem to see the newborn king, but it was the call of Mother Nature that the 3-year-old son of Michaela Lewis heard during his first Christmas program at Emanuel Lutheran Church, Council Bluffs, Iowa. The play was well underway when, suddenly, he announced to his mom that he had to “go,” then made a mad dash for the restroom.

An urgency of a different sort arose in Lisa Roinestad’s third-grade pageant at Our Saviour Lutheran Church, Brooklyn, N.Y. Just before curtain time the “baby Jesus” doll was nowhere to be found. Her aunt found a solution and retrieved from her minivan a doll belonging to Roinestad’s younger cousin. The last-minute stand-in worked well until her horrified cousin recognized her doll and exclaimed, “That’s not baby Jesus! That’s Molly!”

A playful pillow fight broke out during a Christmas program in the early 2000s at Lutheran Church of the Good Shepherd, Hastings, Neb. Squirmy tots, dressed in pajamas and slippers, sat on pillows listening to the story of St. Nicholas when mischievous temptation became too much, recalled Janet and Esther Winter. “What else was on the program that Christmas? Nobody remembers! It was the year of the preschoolers’ pillow fight,” they said.

The last-minute stand-in worked well until her horrified cousin recognized her doll and exclaimed, “That’s not baby Jesus! That’s Molly!”

Impulsivity may cause some Christmas pageants to go hog wild, but actual wild hogs were the memorable element at the 1985 Christmas program at St. Peter Lutheran Church, Goliad, Texas. Using the then-new technological “miracle” of a camcorder, a team assembled in a parishioner’s barn where they planned to tape a dramatization of Jesus’ birth, said Gerald Griffith.

Things went south when the production commotion upset the two hogs in the neighboring pen. The 200-pound critters charged, breaking through the wall and invading the crèche scene, Griffith said. Luckily, nobody was hurt, although the pastor, Rick Hinger, wound up with “hog slobber” all over his jeans.

It was an uninvited cat that stole the show, along with a grinning 3-year-old, at the 1978 pageant at Faith Lutheran Church, Albuquerque, N.M., recalled Janice Dushane. The cat made itself comfortable next to her daughter, Lori, who was an angel. “Well, as the kitty got up on all fours to stretch, Lori very carefully stepped on the tail,” Dushane said. What came next, you can imagine, was a yelp only the herald angels could top.

Things got all mixed up during a pageant rehearsal at Salem Lutheran Church, Rockford, Ill., when children holding up letters to spell out a word stood in the wrong places, reported John Cunningham. “When the questions came, ‘What did the wise men see in the sky?’ the children proudly held up their letter and spelled RATS,” he said.

It wasn’t dizzy spells but an epidemic of stage fright that distinguished a Christmas program at Christ the King Lutheran Church, Ellendale, N.D., said Elaine Babcock. After Mary had taken her place on the set, first Joseph, then the shepherds, and finally the wise men arrived only to “freeze” in place behind the piano. Their quick-witted Sunday school teacher didn’t miss a beat. Turning toward Jesus’ mother she said, “Aren’t we glad Mary showed up for the job?”

In addition to impromptu comic relief, unexpected signs of grace made many pageants memorable. Sharon St. Aubin shared how in the middle of a program at Norway Lutheran Church, Denbigh, N.D., a cherubic “angel” saw her grandmother in the audience and began blowing kisses. “Many of us sat in the congregation wishing we were that grandmother and hoping that someday we will also meet an angel who will be blowing kisses to us,” she said.

Several years ago the “live nativity” at Mannsville Lutheran Church, Elliottsburg, Pa., received a sign from heaven—literally, according to youth director Sue Guyer. After a late-afternoon snow shower, a double rainbow appeared. “What a beautiful reminder that God was, and continues to be, with us,” she said.