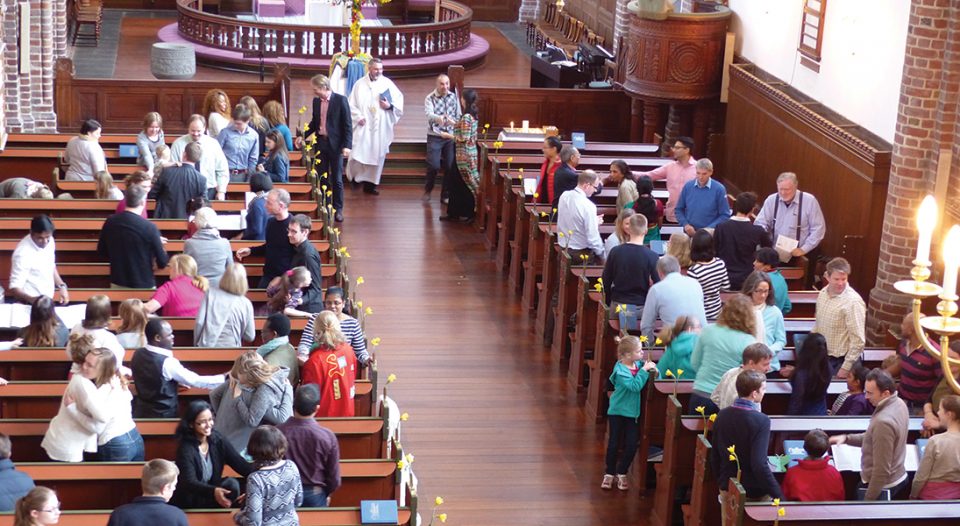 Twenty nationalities from varied denominational backgrounds worship in English at the International Church of Copenhagen (Denmark), led by ELCA pastor and missionary Tim Stewart. At the church, people find a safe and welcoming place to share their challenges and experiences of living in a foreign culture.

At St. Andrew’s United Church of Cairo, worship happens on Fridays. The holy day in Islam and a day off for most Egyptians, Friday draws Christians of many tongues to the church.

Eight congregations meet in St. Andrew’s compound, each with its own pastor, council and programs. Beginning in English at 10 a.m., services then move into Dinka and Arabic, with Amharic and Nuer worship on other days.

For St. Andrew’s diverse membership, daily life outside church can be difficult. Cairo is home to migrants from Africa and the Middle East who are seeking refugee status from the United Nations High Commissioner for Refugees. Until they are registered, which can take many months, refugees have little access to services or protection from the U.N. agency, leaving them at risk of detention and possible deportation.

The environment can be challenging for newcomers. “They tell me, ‘When I walk through these [church] doors, I know I am welcome,’ ” said Kirsten Fryer, the ELCA pastor and missionary who serves the English-speaking congregation.

St. Andrew’s is one of seven international churches in Europe and the Middle East served by ELCA pastors. Some of them are historically affiliated with the ELCA, like the American Lutheran Church in Oslo. St. Andrew’s has Presbyterian roots, but ELCA pastors have served there for almost 40 years.

Founded for North Americans and other English-speaking expats, the congregations now “serve an international community composed of many migrants,” said Viking Dietrich, ELCA regional representative for Europe, the Middle East and North Africa.

“Today, when the reality of global migration is being met by a rise in nationalism, these churches offer a picture of the kingdom of God, a vision  of a church without national barriers between people,” he said.

That vision begins with welcome. Friday mornings at St. Andrew’s get Jean Isteero “ready for another week in this huge, crowded city where Christians are the minority.”

As an American married to an Egyptian, Isteero knows firsthand how hard life can be for newcomers in a foreign country, especially spouses. She encourages visitors to stay for fellowship and often follows up with a note.

“The gospel gives us an opportunity to speak hope in the midst of pain.”

In Cairo, assimilation is complicated given the restrictions. But the warm welcome Amira (last name withheld) received from St. Andrew’s Arabic-speaking Pentecostal congregation raised her spirits. From Khartoum, Sudan, she applied for refugee status this year. Her sister applied 14 years ago and is still waiting. “Getting a blue card, which makes someone a refugee, means a long wait in Cairo,” Amira said.

While they wait, they live side by side with individuals who might be foes in their home context. “Our worshiping communities bring together people from different tribes from Sudan and South Sudan,” she said. “Here you can see them living in peace. That wasn’t the case in South Sudan during the crisis of 2013.”

Today Amira works with StARs, St. Andrew’s Refugee Services, whose roots lie in an English-language program started decades ago by Isteero. StARs improves the life of refugees, asylum-seekers and vulnerable migrants through education, counseling, legal aid and other programs. ELCA World Hunger contributes to its budget.

Jim Vitale, a recent graduate of Luther Seminary, St. Paul, Minn., remembers a West African asylum-seeker at the American Church in Berlin, where he interned.  “He had endured many trials, including the killings of family members, yet he came to church every Sunday and had the best disposition of anyone I ever met,” he said. “I was sitting there complaining about the train being late that morning, and he couldn’t stop talking about how wonderful Jesus was and what he had done in his life.”

Moments like this helped Vitale and his family achieve their goal of “stepping outside North American church culture” and experiencing a worshiping community made up of 30 cultures. The Berlin congregation’s Laib und Seele ministry, which collects and distributes food every Friday to about 75 families, introduced them to neighbors not originally from Germany.

“When you are thrust into a language, country and culture not your own, you lose your own humanity a bit,” he said. “Communicating through smiles and gestures, I felt that on some level we acknowledged each other’s humanity.”

One afternoon a church leader comforted a woman who just learned her brother had been killed in a bombing in Syria. “The gospel gives us an opportunity to speak hope in the midst of pain,” Vitale said. “To watch somebody else do that was incredible and gave me hope that I can minister in similar situations in the future.”

While governments offer varying degrees of welcome, the gospel is more explicit, Fryer said. “The media tells us so much about who can be together, who can work together,” she said. “At St. Andrew’s we don’t think that’s true. … We are simply called to serve.”

“As English-speaking congregations, these churches become a home away from home for many,” said Viking Dietrich, ELCA regional representative for Europe, the Middle East and North Africa. “Our ELCA pastors [there] play an important role in our relationship with church partners.” Learn more at elca.org/globalmission.

Creative ways to learn about the global mission of the ELCA