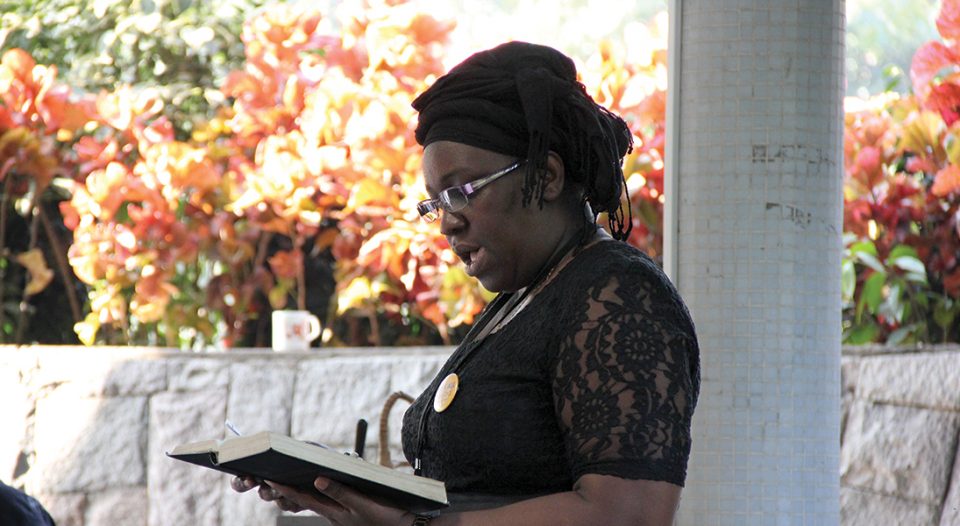 Martina Adhiambo reads her story at a gathering of the ELCA International Women Leaders initiative.

Editor’s note: In observance of International Women’s Day (March 8), we present Martina Adhiambo’s story in her own words. A Lutheran leader in her Kenyan parish, last November she participated in the ELCA Global Leadership Academy in India.

My story is about a Maasai girl named Evelyn.

At 14 years old, Evelyn (last name withheld) completed her primary education in Kenya. While she awaited the results of her final examination, her father arranged for her marriage, received the bridal price and was anticipating the ceremony.

Evelyn did not support this marriage. The night of the ceremony, she escaped from her parents’ home and sprinted to the area chief’s house. The area chief took Evelyn in and sent his security men to fetch her father. They locked him up until the following morning when the chief took him to the police (according to Kenyan law, 18 is the minimum age for marriage). Thereafter, her father went to court.

In court, a children’s welfare officer represented Evelyn. Her father was on his own. Judgment was fair. The church received custody of Evelyn and her father was sentenced to six months in prison.

After the trial, we discussed who from church would care for Evelyn. I agreed to take responsibility as I was the one who signed the court documents. I have a husband and three sons, so my main problem was to explain this to him. Thank God my husband understood and agreed with me.

Day by day Evelyn adjusted to life in our home. Soon the national women’s coordinator enrolled her in a boarding secondary school 72 kilometers (45 miles) from our home. No one apart from us was allowed to visit her at school. I also received strict instruction not to send Evelyn on any errands while at home as the Maasai had sworn revenge on us.

The following year, we heard Evelyn’s father completed his jail term and was breathing fire! People told us to be vigilant as we were marked for death.

Evelyn was also uneasy with the situation. Her school performance, which had gradually improved, started dipping. Every night, Evelyn had nightmares about her father. Something had to be done and done very fast.

Then Evelyn took matters into her hands and spoke with the church’s national coordinator to request a visit with her estranged father. This angered us. After several discussions, we agreed and embarked on the dangerous trip to her village, accompanied by our pastor.

When we arrived at the homestead, a group of armed Maasai was there to meet us. Pastor exited the car and greeted them in their native language, which put them at ease. When Evelyn stepped out of the car, her siblings ran to her, sobbing.

Next Evelyn’s father came toward her, staring at his daughter like he was seeing her for the first time. He opened his mouth, but no words came out. He touched her hair, her hand, then asked, “Is this my daughter?”

At some point he gave a signal that made the warriors who were ready for war stand up and leave in anger. “She’s grown so big; she is healthy and very beautiful,” he sobbed. “People have been lying to me that my daughter is being mistreated and may soon die.”

Then he asked, “Is this the daughter who took me to jail?” Evelyn immediately apologized to her father and he forgave her. Evelyn’s father then apologized to us for the threats he had sent and
for cursing us for taking his daughter.

A small cleansing ceremony was conducted to lift the curses, followed by prayers led by Evelyn’s father. We felt so happy—a heavy burden had been removed from us. While leaving, our pastor asked Evelyn’s father if we she should stay with her father.

“No. Evelyn has a new mother and they have a mission,” he answered. “Let them complete their mission with my blessings.”

Evelyn has grown into a mature 18-year-old lady, beautiful and loved by all. My sons see her as a sister and my mother sees her as a granddaughter. Recently Evelyn completed her final exams. In the future, she hopes to train to become a doctor.

Today all Maasai from her area now take their daughters to secondary school as they fear the arm of the government. May Almighty God be glorified for opening the minds of the Maasai in Evelyn’s village. I pray this expands to all areas where girls are denied education.