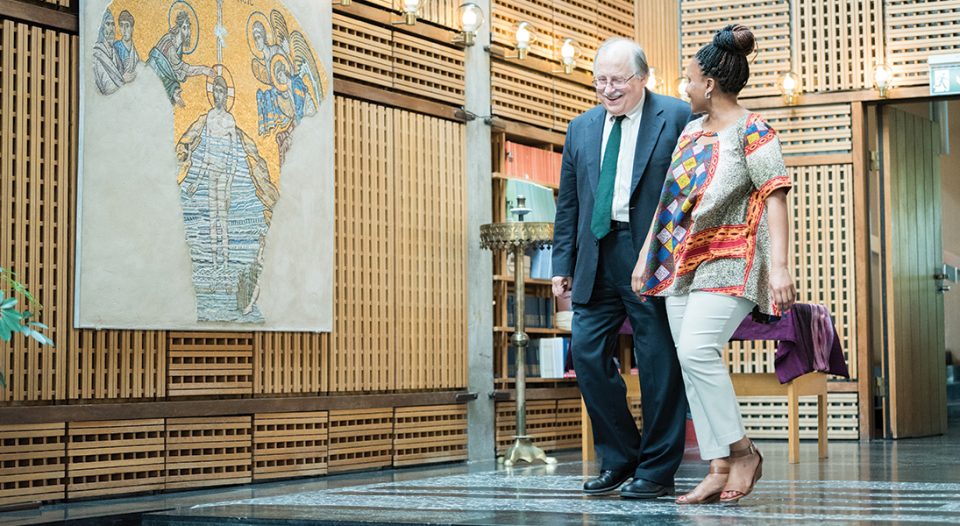 Lutheran Office for World Community staff Dennis Frado and Christine Mangale represent the voice of the ELCA and The Lutheran World Federation at the United Nations.

The ELCA is a church of three expressions: the churchwide organization, synods and congregations. But Rafael Malpica Padilla, executive director of ELCA Global Mission, maintains there is another relationship that binds us together—this church’s connection to the global Lutheran church through its membership in The Lutheran World Federation (LWF).

To help support the ELCA’s outreach on global social issues, the church maintains an office at the United Nations in New York City, in partnership with the LWF. Called the Lutheran Office for World Community (LOWC), it is the voice of the ELCA and LWF at the United Nations. Its work is funded through Mission Support and ELCA World Hunger.

LOWC’s director is Dennis Frado, a member of St. Peter Lutheran Church in Manhattan. He is assisted by Christine Mangale, program director, who is from the Kenya Evangelical Lutheran Church. They often attend the U.N. General Assembly when it’s in session from September to December and Security Council meetings.

“Our main objective is to convey the social policy views of the ELCA and The Lutheran World Federation to the U.N.,” Frado said. “On the other hand, we keep ELCA [congregations] informed about what the U.N. is doing on those issues. Beyond that, we bring to their attention emerging global issues.”

Frado and Mangale share ELCA and LWF policies by meeting with U.N. member states and submitting written and oral statements for consideration at U.N. meetings. ELCA congregations and members stay abreast of  LOWC’s work through its email newsletter.

A champion for human rights

LOWC works, in large part, on issues related to fundamental human rights, justice, respect for international law and better standards of living for all people. It has focused recently on global migration.

“Our main objective is to convey the social policy views of the ELCA and The Lutheran World Federation to the U.N. On the other hand, we keep ELCA [congregations] informed about what the U.N. is doing on those issues. Beyond that, we bring to their attention emerging global issues.”

Earlier this year it sponsored a panel discussion on “Perspectives on Migrants: Lived Realities in Different Contexts,” which featured three experts from countries dealing with these issues. Events like this define the office’s work.

“Lutherans care a lot about justice,” Mangale said. “When we advocate for justice, we ensure that everyone has their God-given rights.”

One of the most gratifying projects, Frado said, has been working with the U.N. Commission on the Status of Women, which is dedicated to gender equality and the empowerment of women.

The annual two-week commission brings together women of U.N. member states, members of civil society organizations and U.N. members. Mangale and Frado arrange meetings and panel discussions for the event, and LOWC also hosts the women who come from around the world for the conference. The most recent commission met last March to discuss “Empowering Rural Women and Girls,” a topic close to Mangale’s heart.

“There’s no issue that doesn’t involve women and girls,” said Mangale, who took a sabbatical last year to study gender equality and women’s empowerment. “If you want to know how a community is doing, look at its women and girls. If this group isn’t flourishing, then the community isn’t either.”

Formed in 1973, the LOWC is rooted strongly in the ELCA’s heart for humanity, focusing on regions where human rights have been violated. Its mission, Frado said, echoes the U.N. charter, which mentions respect for the dignity of the individual.

“One of the things we aim to do is to keep recalling, at least for our own church members, that each person is created in the image of God regardless of their background, nationality, gender or whatever attributes we assign them as humans,” Frado said. “We all need to be given respect and dignity.”

This ministry is funded in part by Mission Support, the undesignated funds congregations share with their synods and synods share with the churchwide organization.