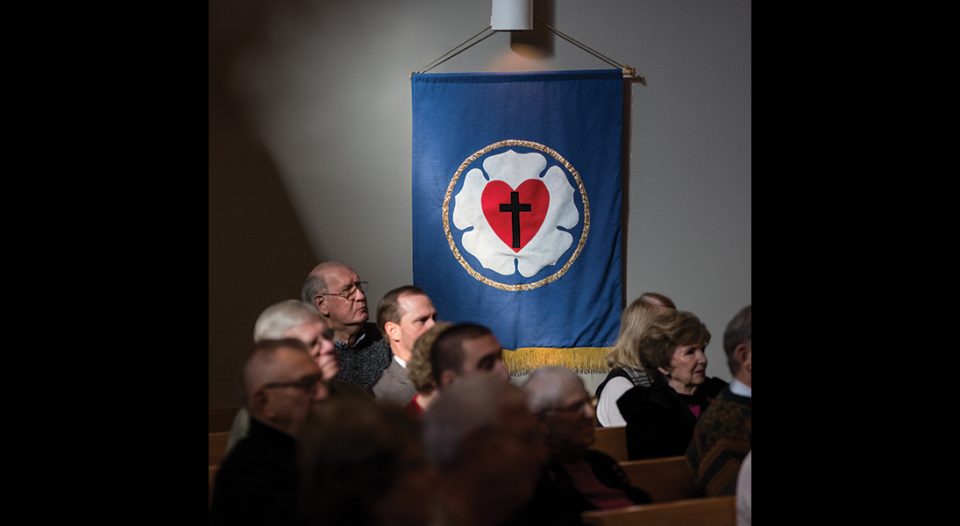 In [the gospel] the righteousness of God is revealed (Romans 1:17).

In the preface to The Complete Edition of Luther’s Latin Works (1545), Martin Luther recorded how this verse in Paul’s letter to the Romans revealed God’s mercy to him. At first, Luther heard the passage as a threat: not only did the Ten Commandments reveal his sin and lack of righteousness, but the gospel also “added sin to sin” with even higher demands.

Then, “by the mercy of God, meditating day and night,” Luther discovered that the gospel was not more rules but “good news”—the original meaning of the Greek word euangelion—received by faith. By connecting the gospel to faith, Paul proclaimed a different sort of righteousness, consisting not of works but of faith alone. Such faith is never a work—it’s a relationship created by God’s good news.

Luther taught, preached and wrote about this insight every chance he got. In 1518, the University of Wittenberg hired Philipp Melanchthon, a brilliant young scholar, to teach Greek and, later, theology. In 1521, he wrote the first summary of Wittenberg’s theology and condensed Luther’s insight to this provocative sentence: “The gospel is a promise.” It is not a threatening law but a welcoming invitation—good news—providing comfort for the terrified, forgiveness for the sinner and faith for the doubting.

These insights became the linchpin of the Reformation. In 1530, the early “evangelical” (good news-oriented) Christians confessed their faith in a document presented to the imperial parliament (diet) in Augsburg. When the emperor rejected the document, known as the Augsburg Confession, Melanchthon wrote the Apology (i.e. defense) of the Augsburg Confession. These documents form the heart of the Lutheran confessions of faith.

“The gospel is a promise.” It is not a threatening law but a welcoming invitation—good news—providing comfort for the terrified, forgiveness for the sinner and faith for the doubting.

The Augsburg Confession says “we cannot obtain forgiveness of sin and righteousness before God through our merit, work, or satisfactions, but that we receive forgiveness of sin and become righteous before God out of grace for Christ’s sake through faith” (article IV, line 1). Moreover, faith is not a “work”: “To obtain such faith God instituted the office of preaching, giving the gospel and the sacraments. Through these … God gives the Holy Spirit who produces faith, where and when he wills, in those who hear the gospel” (V.1-2).

Later we learn that “our works cannot reconcile us with God or obtain grace. Instead, this happens through faith alone when a person believes that our sins are forgiven for Christ’s sake, who alone is the mediator to reconcile the Father” (XX.9-10). This gospel “is very comforting and beneficial for timid and terrified consciences” (XX.15). Faith is “not only a matter of historical knowledge, but a matter of having confidence in God to receive his promise” (XX).

Melanchthon returned to these same themes in the Apology: “But since justification takes place through a free promise, it follows that we cannot justify ourselves. Otherwise, why would a promise be needed? And since the promise cannot be grasped in any other way than by faith, the gospel (which is, strictly speaking, the promise of the forgiveness of sins and justification on account of Christ), proclaims the righteousness of faith in Christ” (article IV).

Lutherans distinguish law from gospel. God’s law reveals human sin and threatens judgment. But the gospel reveals God’s mercy and comforts the terrified. Melanchthon wrote: “For these are the two chief works of God in human beings, to justify the terrified or make them alive. The entire Scripture is divided into these two works. One part is the law, which reveals, denounces, and condemns sin. The second part is the gospel, that is, the promise of grace given in Christ” (Apology, article XII).

Sometimes Scripture subsumes both law and gospel under a single word, “gospel,” as in Mark 1:14-15: “Jesus came to Galilee, proclaiming the good news of God, and saying … ‘repent, and believe in the good news.’ ” The first “gospel” includes both repentance (law) and faith (gospel). But in the last line, “gospel” is linked only with faith.

Lutheran theologians would explain this ambiguity in the Formula of Concord of 1576: “Because the word ‘gospel’ is not used in just one sense in the Holy Scripture … we believe, teach, and confess that when the word ‘gospel’ is used for the entire teaching of Christ … the gospel is a proclamation of both repentance and the forgiveness of sins” (Epitome, article V).

At the same time, when Scripture contrasts law and gospel, “we believe, teach, and confess that the gospel is not a proclamation of repentance or retribution, but is, strictly speaking, nothing else than a proclamation of comfort and a joyous message which … comforts consciences against the terror of the law, directs them solely to Christ’s merit, and lifts them up again through the delightful proclamation of the grace and favor of God, won through Christ’s merit.”

To this day, Lutherans continue to bear witness to the whole church that the gospel is a promise, truly good news of God’s mercy and love in Christ, received by faith alone. As with Christ’s resurrection, we say: “What comfort this sweet sentence gives” (“I Know My Redeemer Lives”).

Timothy J. Wengert
Wengert, an ELCA pastor, is professor emeritus of Reformation history at the Lutheran Theological Seminary at Philadelphia. Author and editor of more than 20 books, including Martin Luther's Catechisms: Forming the Faith (Fortress, 2009), his translation of the Small Catechism is used extensively throughout the ELCA.

It’s Greek to me

Lectionary blog: What do we depend on?