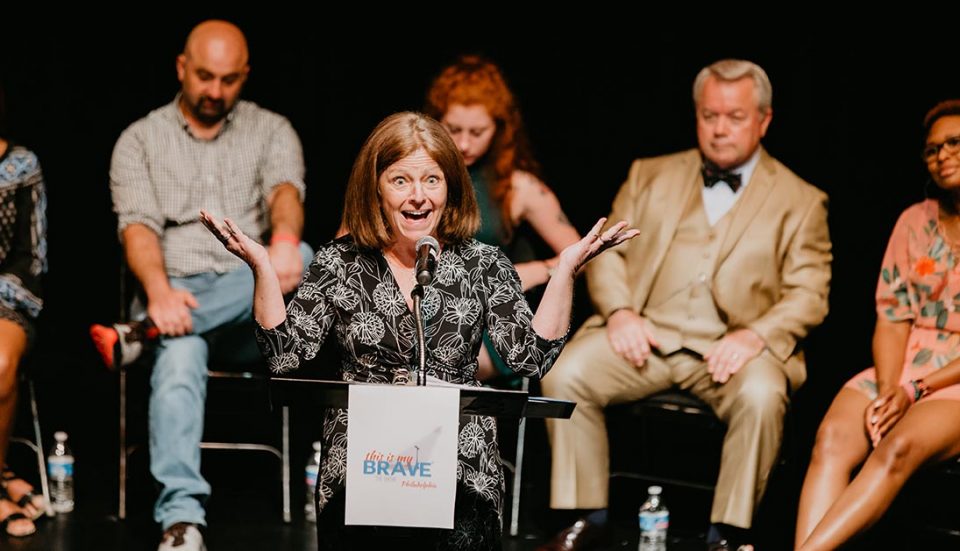 In 2018, Elise Seyfried opened up about her mental illness on stage as part of a "This Is My Brave" show. Members of her ELCA congregation were in the audience, cheering her on.

I walked to the podium and stood in the spotlight. Before an audience of 250 people, I began to tell my story. Twelve years ago, I would have been terrified to talk about the bipolar disorder that completely upended my life. But that day, joined by 14 other women and men who live with mental health issues, I decided to be brave.

When I was diagnosed with bipolar disorder, I had been sick for more than a year. I’d experienced wild mood swings, with episodes of mania quickly followed by depression. As director of spiritual formation at an ELCA congregation outside Philadelphia, I led mission trips, vacation Bible school, Bible studies, confirmation classes and much more—all while hiding my symptoms as best I could. A faithful Lutheran, I wondered: Why am I feeling so hopeless? And why do I fear confiding in my church family?

I believed my fear was justified because I knew the stigma surrounding mental illness in our society. People with mental illnesses are shunned and misunderstood; they lose jobs and friendships. Unlike heart disease or cancer, mental illness is often seen as a character flaw, something one can overcome with willpower—or, in my case, prayer. So for months I suffered in silence.

“I believe that, even in my bleakest moments, God was with me. As painful as my mental health crisis was, God gave me the strength to create something good out of it.”

At last I began to see a psychiatrist and to take medication that stabilized my moods. Over time, I began to feel more like myself again. One day I took a chance and wrote a letter to my congregation explaining what had been going on with me. To my surprise and joy, the response was overwhelmingly positive and loving. Many shared their stories of mental health struggles, knowing they’d found a safe place and a listening ear. Eventually, I began leading a support group in my congregation for parents of children and youth coping with mental illness.

Last year, I took my biggest step yet and co-produced a live show for This Is My Brave, a national organization that recruits ordinary people to tell their stories of mental illness. My show would be the first ever presented in Philadelphia. Again, my congregation came through for me, offering rehearsal space for the performers.

On the day of the show, I saw many church friends in the audience. I knew I could count on their support. But all the strangers there—how would they react? My friends on stage and I would all need to be brave and have faith that people would be understanding. We needn’t have worried. As we each stood and spoke, we felt a wave of acceptance and compassion from the crowd. It was a wonderful experience and a great opportunity to erase the stigma.

What a shame it is that, in 2019, we still need courage to talk about living with mental illness. My hope and prayer is that someday soon these conversations will become normal and matter-of-fact. In this country, 20 percent of all adults and a high percentage of adolescents live with some type of mental illness. They should never have to suffer alone, especially in their faith communities.

I believe that, even in my bleakest moments, God was with me. As painful as my mental health crisis was, God gave me the strength to create something good out of it. I know that, with God, my light, my stronghold, I do not need to be afraid—whatever challenges I face.

Elise Seyfried
Elise Seyfried is a freelance writer whose work has been published in The Philadelphia Inquirer, Guideposts and many other publications. She is author of three books of humorous spiritual essays and director of spiritual formation for an ELCA congregation in Oreland, Pa.

What chronic illness taught me about grace

Study guide: Dignity & grace in the face of mental illness