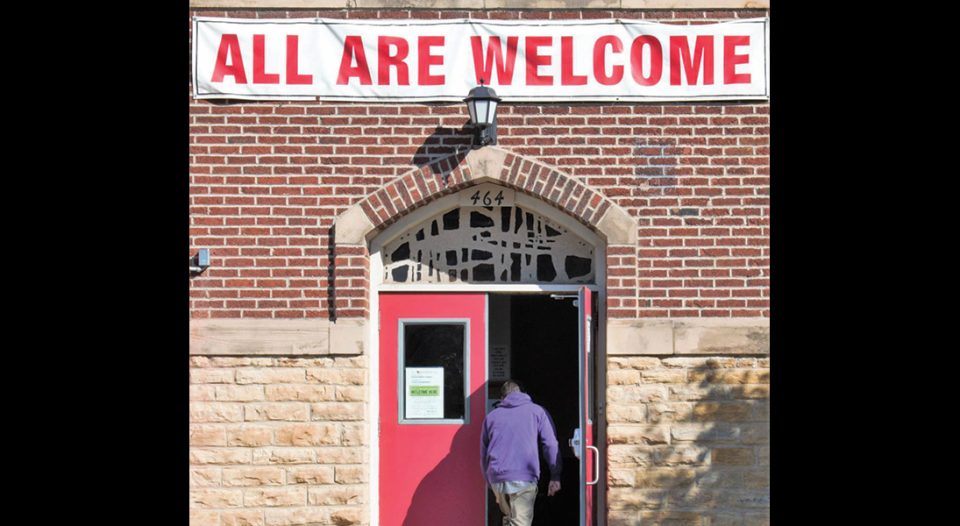 The congregation of First Lutheran, St. Paul, Minn., has a long history of caring for their neighbors who are living in poverty. Last year First fought a lawsuit to ensure that they could continue this mission.

For First Lutheran, St. Paul, Minn., caring for people who don’t have a safe place to live or who are living in poverty is as important to its mission as Sunday morning worship, and it stems from its start as a congregation.

Its first pastor, Eric Norelius, was a Swedish immigrant who would go on to have a building named for him at Gustavus Adolphus College, St. Peter, Minn., and a statue erected of him in Lindstrom, Minn. But perhaps his largest legacy was his commitment to caring for people living in poverty in the congregation’s neighborhood. First’s current pastor, Chris Olson Bingea, said Norelius was known as a “friend to the homeless.”

Olson Bingea came to First in 1985, serving as its youth director for four years. She found she enjoyed urban ministry and working in a diverse community. When she returned nearly 20 years later as pastor, the congregation was aging and finding its way again. Olson Bingea led them to recommit to providing shelter and safe spaces for people living in poverty.

The congregation started a breakfast on Sunday mornings. They saw it as a community outreach, but it didn’t work that way at first. “For about a year and a half, we ate with ourselves,” Olson Bingea said. “Eventually we started feeding [other] people.”

They soon learned that what people needed went beyond food—a sense of community, housing and health care were
also important.

Around 2007, First partnered with nearby Metropolitan State University’s nursing department to have students provide free foot care, blood pressure checks and other health care needs. This created the Love Grows Here Wellness Center at First. Then Wednesday evening community meals took the place of the Sunday breakfasts, and a woman brought a sewing machine to mend people’s clothing and backpacks.

In 2016, Listening House approached First about using its site. The next year the nonprofit began providing a day shelter and community center at First for people who are lonely, disadvantaged or experiencing homelessness.

Coupled with the wellness center, the partnership with Listening House meant the congregation was living its desire to build relation-ships in the neighborhood.

But conflict soon followed. Neighbors were concerned about the number of people frequenting the day shelter and the potential for crime or disruption. They soon convinced the St. Paul City Council to institute a zoning restriction limiting the number of people served by Listening House and the wellness center to 20 visitors per day.

First responded to the challenge, leaning on the legal background of its then-intern pastor Maggie Anderson Peterson, who connected the congregation to a law firm. Drawing the city’s attention to a federal regulation in the Religious Land Use and Institutionalized Persons Act (RLUIPA), the church noted that the city was barred from interfering with the rights of religious institutions while practicing their mission.

“[Jesus] fed people and healed them even before he preached or taught. He showed love to people no matter what and wasn’t bound by traditions or rules that meant some were invited in and some were not.”

In June 2018 a federal judge issued a preliminary injunction, and by year’s end the city reached a legal settlement with Listening House, changing the capacity limit to 112 visitors at any time.

Olson Bingea said the legal battle seemed more contentious than it actually was, adding that police and many neighbors support the church’s work.

Now First hopes other religious institutions that do anti-poverty work can use the RLUIPA precedent to protect their ministries.

But for Olson Bingea, the best parts of this ministry come from the stories of people she’s met through this work.

One story involved a woman who attended Home-full Camp, a weeklong event for people living in poverty at the congregation’s Bay Lake Camp in northern Minnesota. The woman spent her first three days in withdrawal from drugs. “When she finally woke up enough to start having conversations, we talked a lot,” Olson Bingea said. “She was so struck by the fact that she was finally able to sleep in safety. It changed the course of her life.”

Five years later, that woman has remained sober, was married at First and, later, her two children were baptized there.

Cheryl Kenney, a wellness center and Listening House visitor, shared her story: “When I first came, I was afraid, but I got involved. I began by helping make food in the kitchen and doing what I could to promote it everywhere. I learned so much about different types of healing and how important being with others was.”

Kenney later joined First, saying the congregation gave her a sense of what unconditional love really was. “[Jesus] fed people and healed them even before he preached or taught,” she said. “He showed love to people no matter what and wasn’t bound by traditions or rules that meant some were invited in and some were not.

“I’ve noticed that people who come to the wellness center and the Listening House have also started coming to church, and now I pray that people will come so they can know the same love I’ve experienced.”

A sanctuary for students