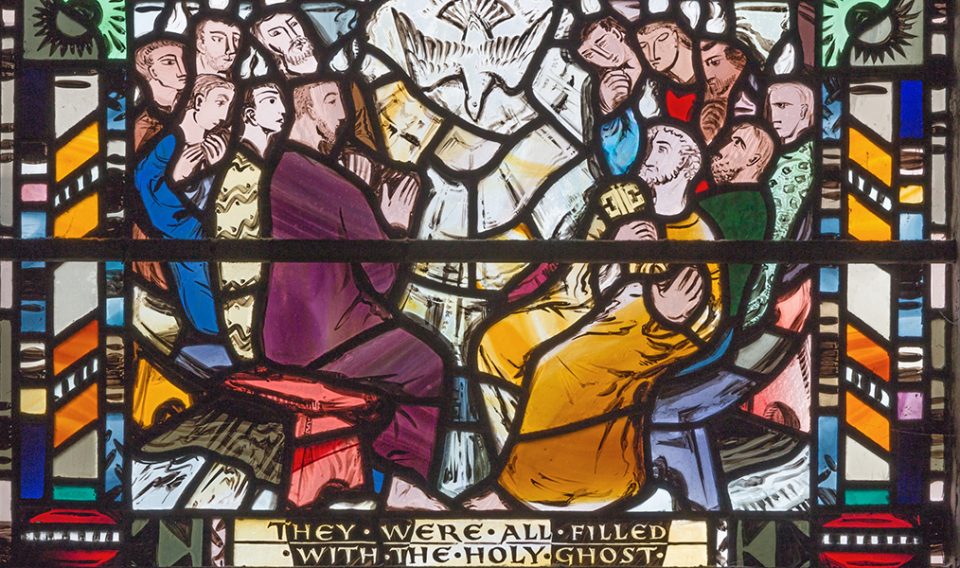 The scene of Pentecost on the stained glass in church St Etheldreda by Charles Blakeman (1953 - 1953).

Pentecost is an under-celebrated holiday. I love Pentecost! God sent the permanent presence of God’s Spirit in exactly the way that made sense on that particular day. In so doing, God reaffirmed the centuries-old commitment of God’s chosen people to be simultaneously holy and a welcoming community for all people.

It’s important to remember that the first Pentecost didn’t happen in Jerusalem but at Sinai. Fifty days after the Passover (which is where we get the name Pentecost/Πεντηκοστή “50th”) God appeared to the Israelites who had assembled at the foot of Mount Sinai.  The Bible is explicit that this appearance was accompanied by a multitude of “voices” (קֹלֹת/Qolot Exodus 19:16; קֹּולֹת), a lightning storm and something like lamps or tongues of fire (לַּפִּידִם/Lapidim—“lightning” is an unfortunate translation choice and ignores the other occurrences of the word in the Bible as well as millennia of Jewish precedent). The voices and the fires were seen by the whole community (Exodus 20:18).

How is a voice seen? The rabbis tell us that each voice was a different human language into which the Torah was revealed at Sinai. Rabbi Yochanan said: “When God’s voice came forth at Mount Sinai, it divided itself into 70 human languages, so that the whole world might understand it. All at Mount Sinai, young and old, women, children, and infants according to their ability to understand. Moses, too, understood only according to his capacity, as it is said (Exodus 19:19), ‘Moses spoke and God answered him with a voice.’ With a voice that Moses could hear” (Midrash Exodus Rabbah 5:9).

The Torah was revealed in 70 languages, which was symbolic of all nations. The Israelites could see the mixed multitude that traveled with them (Exodus 12:38) understanding Torah in their own languages! Every Pentecost since Sinai would have carried the memory of that first one in which flames and a multitude of languages ushered in God’s appearance to the people and the revelation of God’s ongoing presence.

The celebration of Shavuot/Pentecost was one of the big three pilgrimage festivals while the temple stood (Exodus 34:22, Numbers 28:26, Deuteronomy 16:10) and traveling to Jerusalem was incumbent upon all Israelites. They were to bring the first fruits of their late-spring harvest to the temple. That’s why on the first Christian Pentecost, Jews, including recent converts, from all over the world were gathered in Jerusalem to celebrate a festival that was several hundred years old already.

After Jesus was crucified around the time of the Passover, and he appeared in various places over the next 40 days, his disciples only had to wait another few days before the time came to celebrate Pentecost. They were already planning to remember how God had appeared to God’s people over a thousand years earlier with multiple languages, stormy weather and little fires to inaugurate a new covenant with God’s people.  Those in Jerusalem that day weren’t disappointed! God’s Spirit appeared with power to do a new thing in an old way. The people again heard a mighty wind storm (Acts 2:2). They again saw something like tongues of fire (Acts 2:3). And they again heard the words of God proclaimed in many human languages so that all people could understand what was being said (Acts 2:4).

From the earliest time, God has been at work bringing those who were once far away into God’s kingdom.

But what difference does it make for us that when God welcomes people into an intensified relationship, God does so with the proclaiming of the word in multiple languages? God cares deeply that no one be left out of the revelation, particularly those who have already drawn close. The mixed multitude at the first Pentecost at Sinai had already left Egypt, and their normal lives to follow this powerful God with God’s people. God made it a point to speak to the entire assembly in voices that they could understand.

During the celebration of Pentecost while the temple stood, the people were enjoined to recite “my father was a wandering Aramean” as they presented their sacrifice to remember a time before their incorporation into a holy people when their ancestors were foreigners in a strange land (Deuteronomy 26:5). At the first church-age Pentecost, God again made sure that all those, including proselytes, who had come to celebrate from North Africa, Asia Minor, the Levant, Arabia, Persia and Central Asia, were welcomed in their own languages and invited into the new thing that God was doing.

We are called today to participate in similar welcoming to people from some of those same places. If we turn away or refuse to associate with people from Libya, Egypt, Arab countries and Persia, (or anyplace else), especially because they speak a different language from us, we are doing the exact opposite of what God did during those Pentecosts at Sinai and Jerusalem. From the earliest time, God has been at work bringing those who were once far away into God’s kingdom. This active inclusion continued into the early church. Paul said God’s Spirit is a “spirit of adoption” that makes strangers into children and heirs (Romans 8:15-17).

Even though much of the world doesn’t know the work of the Spirit, we have the Spirit with us to abide with us forever (John 14:16-17) and remind us of all things (Romans 14:26). Christians cannot be reminded often enough that God has always been reaching out to people across linguistic and ethnic lines. At Pentecost, we remember and celebrate God’s Spirit of adoption, reaching out to bring people close in old and new ways.