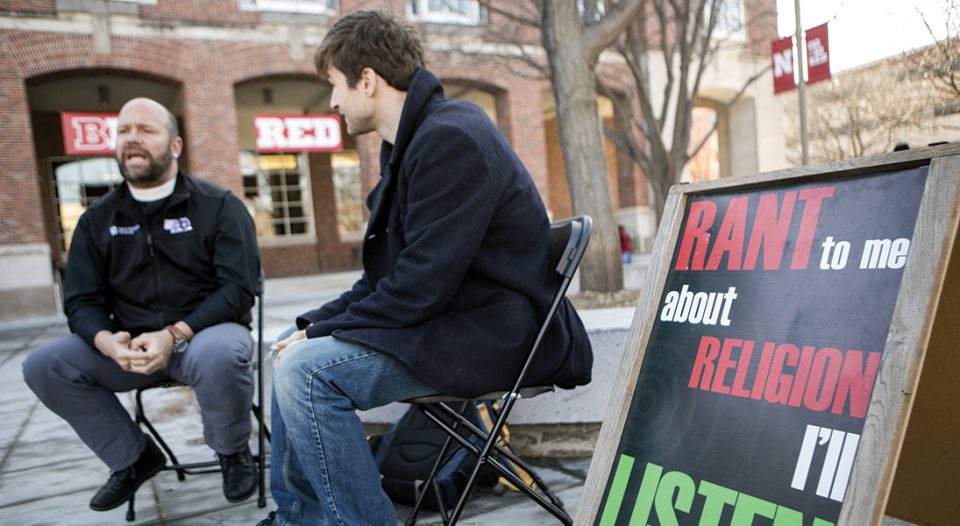 Adam White, campus pastor of the Lutheran Center at the University of Nebraska–Lincoln (left), sits with a student on the campus plaza, where White makes himself available weekly for conversations about religion. Credit: Luke Gibbons/The Daily Nebraskan

It was a Thursday afternoon after the leaves had turned color on the trees that punctuate the concrete plaza in front of the student union at the University of Nebraska–Lincoln. The freshness of the new academic year hung in the air, but the frantic pace of the first weeks had passed.

Anxiously seated on a folding chair, I waited under one of the trees on the plaza with an empty chair to my left. To my right, a folding chalkboard sign read: “Rant to Me About Religion and I’ll Listen.”

At a campus ministry conference the previous summer, my colleagues had described what some of them called “outdoor office hours.” I was intrigued. My vision of ministering to passersby had been shaped by the street preachers who often occupied the plaza early in the semester, ranting at students, calling out epithets and threatening people with damnation.

“You in the hijab,” one might shout, “God doesn’t love you.” Another might call out a derogatory term at a woman wearing shorts simply based on the length of her hemline. A third might condemn a student wearing a T-shirt from the LGBTQA+ Resource Center as an “abomination.”

Having witnessed this far too many times, I wondered if I could provide some counterpoint to the chaos—an alternative or even a form of resistance. Instead of ranting, I could be a listening presence who was open to the rants of others: their stories and frustrations, their experiences of religion and faith that had been disappointing or even traumatic. I wanted to invite conversation rather than demand conversion.

I didn’t have to wait long that first Thursday. Minutes after I’d set up, college students began flowing through the plaza as classes were dismissed, and one young man slowed to read my sign. He stepped toward me and said, “I’ve got some thoughts on John Calvin (a 16th-century theologian).”

Hundreds of Thursdays, and eight years, later, I still get a little anxious when I set up my chairs and sign on the plaza. I never know what kind of questions or stories I’ll get, or what kind of values and emotions will lie behind them. That’s what makes it interesting.

Instead of ranting, I could be a listening presence who was open to the rants of others: their stories and frustrations, their experiences of religion and faith that had been disappointing or even traumatic. I wanted to invite conversation rather than demand conversion.

I’ve had countless conversations with students who were raised in the Christian faith but found it inhospitable to their doubts, curiosity and questions. I’ve shared numerous in-depth dialogues with international students, especially Muslims, on a wide range of topics, learning far more than I imparted. Earlier this year I even found myself in a conversation with someone who identified as a Nordic Pagan.

I’ve heard students rant about the role that religion—Christianity in particular—has played in warfare, sexism, racism, homophobia and every other form of violence imaginable. To their surprise, I agree with their criticism more often than not.

I’ve prayed, offered pastoral care and laughed with students who never would have set foot in the Lutheran Center, where I serve as pastor. One time a student sat with me and asked that I pray for her father, who had pancreatic cancer. “I’m not sure what I believe about God,” she said, “but prayer can’t hurt, right?” In the middle of a bustling public space, we prayed together.

Another student wanted insight on her relationship with her boyfriend. She was a Christian; he wasn’t. “Is this a problem?” she asked. We talked for close to an hour.

One student, a history major, had questions about the Reformation. Minutes into our conversation, we were both busting a gut about how all too often Lutherans inaccurately portray Martin Luther as a comic book hero wielding a giant Thor-like hammer outside Castle Church.

Again and again, in such unexpected holy conversations, the boundaries of where the Lutheran Center began and ended seemed to disappear.

I had one of those holy conversations with Jeff, who first sat down with me four years ago. “I used to be Lutheran,” he said. I discovered that Jeff, a Judaic studies major, was deeply interested in faith but also served as president of an agnostic student organization.

“What happened with your church?” I asked. He told me that when he was a kid, he loved his church. In fourth grade, he took it upon himself to read the Bible cover to cover: “When I was reading, it was awesome. I just kept writing down questions.”

When he’d polished off Revelation, he set up a meeting with his pastor. “I wanted to talk to him about my questions,” Jeff told me. But when he got to his fifth or sixth question, the pastor stopped him and said, “We don’t really ask questions like that here.”

That was it. Jeff would look for conversation about values and truth elsewhere.

During the year after we met, I got to know Jeff. He kept coming back. He had found a small hint of what he’d been looking for all those years ago: a curious conversation, a faith struggling to understand what it professes, a tradition that would face up to stories of its own brokenness, a church that would rather listen than rant.

Adam White
Adam White is the campus pastor of the Lutheran Center at the University of Nebraska-Lincoln.

Free prayer in a coffee shop

A sanctuary for students