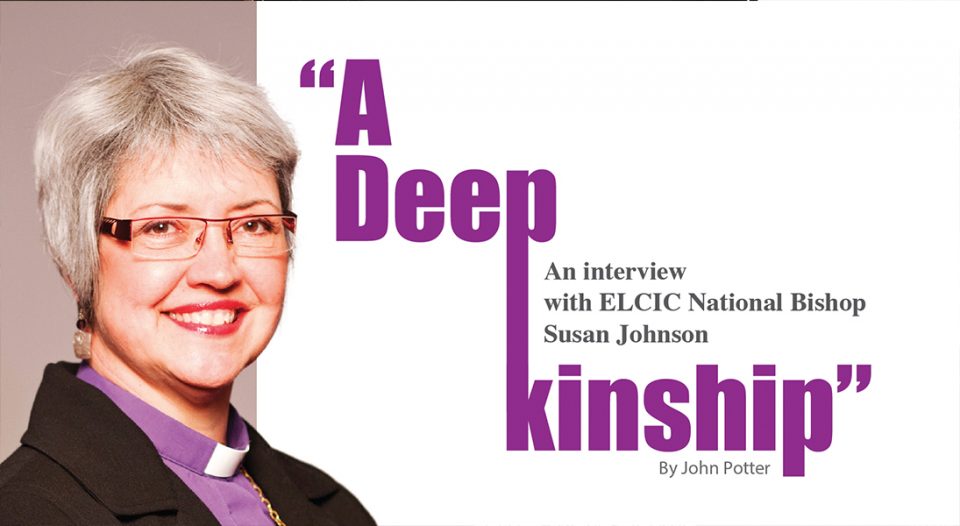 When the ELCA Church Council met in April, Susan C. Johnson, national bishop of the Evangelical Lutheran Church in Canada (ELCIC), offered a greeting to the group as an ecumenical partner. Living Lutheran spoke with Johnson then about our churches’ ties, some of the issues the ELCIC is addressing at its National Convention this month, and her experience collaborating with ELCA Presiding Bishop Elizabeth Eaton as women leading churches.

Living Lutheran: What do you find particularly meaningful about the relationship between the ELCA and the ELCIC?
Johnson: It’s funny, I know we’re officially an ecumenical partner, but I don’t think of us that way. We’re sister churches. Because, with the way the meiosis and mitosis happened—the bringing together and dividing—we have been parts of the same bodies before; now we’re two national churches. But I think it’s in our DNA to think of ourselves almost like conjoined twins that have been successfully separated. There’s still a deep kinship, even though, in many ways, we’re also vastly different.

But we’re so glad for the partnership that we continue to have, and for the ways that our churches do work together. … The gift that we have in working together and cooperating in global mission, and the way your global mission really supports the work that we are able to do. The fact that, for a number of years, the bishops have invited us to come be a part of the [Bishop’s] Academy—it’s the kind of thing we couldn’t do on our own, but delight in developing those relationships and having the opportunity for people to have those conversations [asking] “How do you do it?” I think we’re always looking for new ways to partner together.

In your greeting to the Church Council, you addressed some of the items coming to the ELCIC National Convention. Could you identify some of them?
Two major processes in our church are bringing forth major resolutions. One is called “The Call to Faithfully Journey with Those Who Are Dying,” and also related motions on spiritual care, palliative care and mental health care. Canada has legalized assisted dying, so it’s become a really major topic of conversation.

The second major piece of work has been done by our Faith, Order and Doctrine Committee … they’re bringing forward a document called “Reimagining Our Church—Public Ministry in the ELCIC” to really think about the relationship between ordered ministries and mostly—and I’m delighted with this—lifting up the role of the ministry of the baptized and reminding us all that that’s our primary vocation. So we’ll be bringing forward a recommendation along with that to ordain deacons. We already ordain bishops; we’re different from you in that way.

We are, over the next few years, going to have to re-vision how we are going to be church. And that’s exciting and scary at the same time.

We’ve got several motions coming forward related to creation care. The theme of our convention is “Called to Journey Together: The Ministry of Reconciliation.” In thematic presentations, we’ll be looking at reconciliation in terms of our relationship with indigenous peoples; in terms of our relationship with creation; and in terms of relationship with people of other faiths. We’re bringing forward a new program, if it’s approved, on Christian-Muslim engagement, done jointly with the Anglican Church of Canada, our only full-communion partner thus far. And, of course, all the other stuff that you’d expect—budgets and constitutional amendments that people just adore and elections, including national bishop.

In addition to the areas you mentioned, what are some of the most pressing issues the ELCIC has been addressing recently?
We’ve adopted a new strategic plan, and the first strategic goal we set for ourselves is called “Courageous Invitation.” We sound so bold and exciting, and yet, it is so hard to do. We are facing, like all major churches, decreases overall in numbers and finances, and because of our size, that’s getting to a critical state right now. And yet, when I visit some partner churches who are much, much smaller, I realize, “I can’t be complaining.” But we are, over the next few years, going to have to re-vision how we are going to be church. And that’s exciting and scary at the same time.

Related, one of the ELCA’s current central goals is developing vibrant, vital congregations. One aspect of meeting this goal has been in the recruitment and support of people across the church for leadership roles. Is the ELCIC working to address some of the same concerns?
The way we have done what we’ve called “Canadian mission” in the past has been to buy land, put in a pastor-developer, build a congregation and then literally build a church—and cripple a congregation with mortgage debt for years to come. That’s not working for us anymore. It’s not a financially sustainable model. So we’re [asking], “What are other ways that we can be creative and think about ways of growing communities?”

The other big thing I will be announcing at convention … [is that] we are launching what we’re calling “Living Our Faith: Pray, Read, Worship, Love.” I’m going to be inviting the church into a year of prayer, starting at convention, focusing on teaching and encouraging people in these basic aspects [of spiritual development]. I’m excited about that.

You and Bishop Eaton often speak or appear at the same events. What has the experience of working together, especially as women leading churches, meant to you?
It’s been wonderful. Not a lot of people have the kind of job that we have, and to be colleagues and friends is really important. We schedule monthly phone calls and have a chance to share joys and sorrows, both personally and professionally. I did that with Bishop Mark [Hanson] beforehand as well. But it is special to be two women leaders of churches, especially when we relate ecumenically with some of our partners [for whom] ordained women are not on the radar and, sometimes, internationally, where it’s a different kind of experience as well. It helps a lot to have a colleague and a friend.