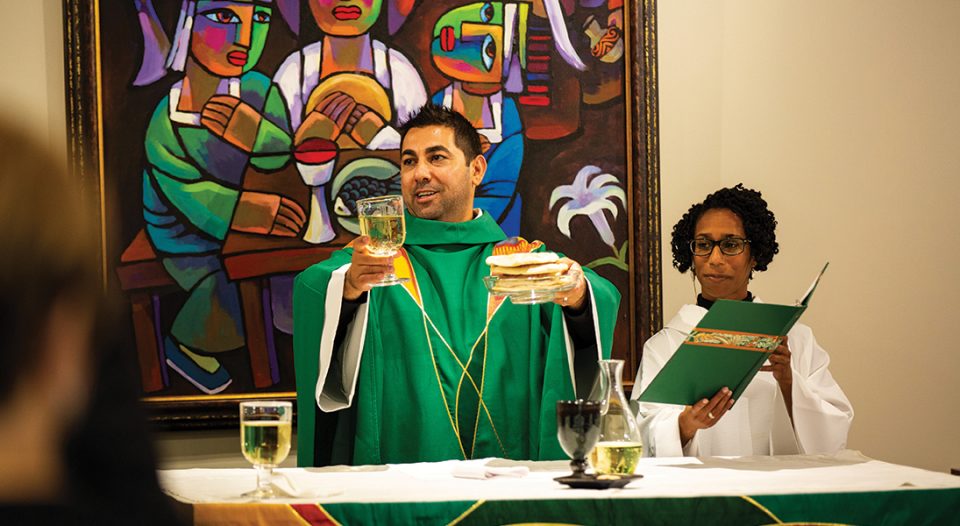 Editor’s note: Our June cover story, “Worship 101,” examined the “whats, whys and hows” of ELCA worship. We now continue the story as a monthly online series further exploring what Lutheran worship is, how we Lutherans worship and why we do so.

If you’ve hung around little kids in the past two decades, you’ve probably encountered the most powerful and inexplicable force in the universe. I refer, of course, to Elmo.

As toddlers, my children could spot Elmo’s picture on a single balloon at the opposite end of the grocery store—and then made sure everyone within earshot saw him too. Elmo seems scientifically calibrated to appeal to children who can otherwise barely make sense of their surroundings. He talks like a preschooler. He’s red, one of the first colors kids use to distinguish objects. Just as importantly, the furball’s televised delivery device—a short segment on PBS’ Sesame Street called “Elmo’s World”—balances two methods of learning about the world: repetition and exploration.

The psychologist Rosemarie Sokol Chang points out that every episode of “Elmo’s World” hits the same dramatic beats: Elmo talks to his goldfish, to a baby and to a hapless clown named Mr. Noodle, which introduces new ideas. For adults, the repetitive structure might quickly become annoying. But even grown-up entertainments such as romantic comedies and superhero origin stories use similar techniques. Repetitive frameworks let us feel as if we’re part of the story; creative twists on those frameworks keep us engaged.

The same is true of another, more important repetitive framework Lutherans encounter on a regular basis: our liturgy.

Most Lutheran liturgy—the words, actions and music we use during weekly worship—derives from the Catholic Mass. The shape of the Mass has certain characteristics that resonate deeply with worshipers of all stripes. The liturgy begins with prayer and repentance, preparing us to hear God’s word and offer our praises. It climaxes at the Eucharist, when we join Christ and our fellow Christians in the heavenly banquet hall. After Communion, we’re dismissed into the world to serve God and our neighbors. These four liturgical elements—prayer, word, sacrament and sending—have been part of worship for centuries, at least as far back as the second-century writings of apologist Justin Martyr.

When a worship community acknowledges that it is, in fact, making specific liturgical choices, worship can begin to feel more deliberate and thoughtful.

Of course, all worship is local, based on the needs of specific communities in particular places and times. The Mass is one extraordinarily useful organizing tool, but it’s not the only option. Regardless of how a worship community structures its liturgy, though, repetition remains key. When worshipers can anticipate the dramatic beats of the liturgy, they feel as if they’re part of the story they’re reenacting.

But there’s a catch: Acting out the same story over and over again every week without variation would squeeze the life from our worship. Fortunately, the flexible structure of the liturgy welcomes new elements.

Leaders can introduce unfamiliar hymns during pre-service singalongs or mid-service, when the congregation is feeling settled in. To draw the assembly’s attention to certain liturgical elements, we can perform them in different ways or shuffle them to different parts of the service. On occasion, we might jettison the Mass-oriented liturgy altogether for something different—maybe a lessons-and-carols service or a hymn-sing. Doing so might make us appreciate our regular liturgy when it returns the following week. It also reminds us that God can’t be trapped inside one particular liturgical framework.

When a worship community acknowledges that it is, in fact, making specific liturgical choices—when it doesn’t take those choices for granted—worship can begin to feel more deliberate and thoughtful.

In congregations that feature a Gospel-reading procession, one of my favorite Eastertide Gospel acclamations is Herbert Brokering’s “Alleluia! Jesus Is Risen.” The second verse—“Walking the way, Christ in the center, telling the story to open our eyes”—spells out exactly what the assembly is doing in that moment. This small twist on a familiar beat in the worship story commands and redirects the community’s attention, first to the framework of the story itself, then to Christ, who stands at the center of both the story and the community.