Editor’s note: In light of the adoption of the social statement “Faith, Sexism and Justice: A Call to Action” at the 2019 ELCA Churchwide Assembly, we are re-running this piece on ELCA social statements, originally published on June 7, 2017.

Since 1991 the ELCA has been creating social statements—teaching and policy documents that provide a framework for the church and its members to think, discuss and act on social issues from a perspective that intersects faith and society.

“The very first one adopted was ‘Church in Society: A Lutheran Perspective,’ which establishes the affirmations and commitments to guide ELCA participation in society,” said Roger Willer, ELCA director for theological ethics with the Office of the Presiding Bishop.

“That statement explores how Scripture and our Lutheran heritage state unequivocally that God is at work through family, the economy and the state, and says our church has the responsibility to jump into God’s work there,” Willer said, explaining how this document essentially makes the case for the ELCA creating and using social statements. “The statement commits the ELCA to sustaining people’s vocations, witnessing as an institution and deliberating on questions.”

The creation of an ELCA social statement is a thorough and lengthy process that includes participation from across the entire church. For a social statement to ultimately be adopted and put into use, a two-thirds vote from an ELCA churchwide assembly is required.

“Social teaching documents aren’t confessional or litmus tests, meaning you’re only Lutheran if you believe every word, but they put into writing the faith-based thinking about social issues that guides members and the public work of our church,” Willer said. “Social teaching documents think through—from the perspective of faith—the frameworks needed for discerning God’s call to be people who love, seek justice and respond to social issues.”

“There are a lot of different, even conflicting, ideas and beliefs represented, so meetings are lively and members leave thinking deeply about the topics,” Willer said. “The task force spends the bulk of its meeting time listening and learning from specialists, each other and ELCA members’ input. There have been about two dozen specialists and reports from more than 100 listening events that occurred throughout the church from 2013 to 2016.”

In November, the task force will publish a draft of the social statement and will then again listen to more feedback through hearings at synod assemblies, clergy events and in congregations.

The steps and processes that go into developing an ELCA social statement are below: 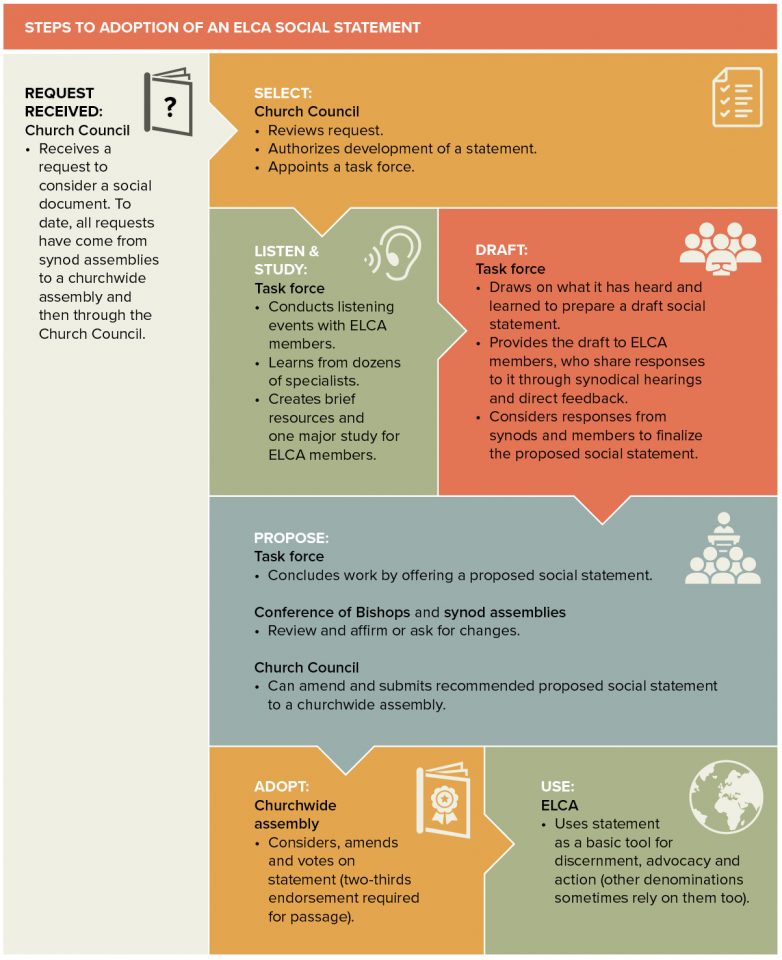 For more information on the “Women and Justice: One in Christ” social statement, go to elca.org/womenandjustice.