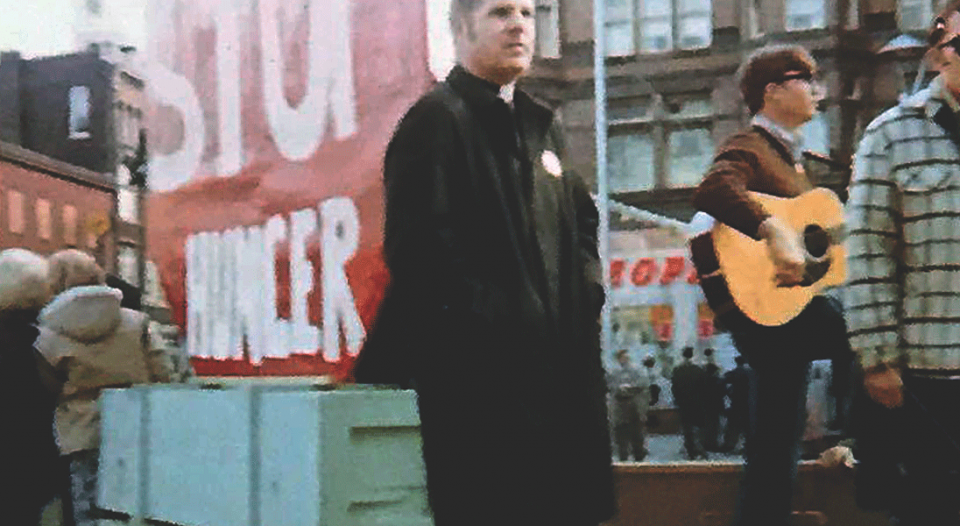 Bill Sowers, a retired ELCA pastor, participated in the first CROP Hunger Walk in 1970. Fifty CROP Walks later, he plans to participate in the fundraising event he helped create again this year in York, Pa. Photo: Courtesy of the Sowers family

Many ELCA congregations participate annually in CROP Hunger Walks, a ministry of Church World Service (CWS). This fundraising event, which is celebrating its 50th anniversary this year, started with an idea from a Lutheran pastor.

CROP, which stands for Christian Rural Overseas Program, began as a way for congregations and groups to raise money to help people who are food insecure. When CROP was founded in 1947, its primary mission was to help Midwest farm families share their grain in post-World War II Europe and Asia, according to CWS. Today, funds from the CROP Hunger Walks provide food and agricultural training around the world and stock food pantries at home.

The Lutheran pastor who started it all, Bill Sowers, now retired, recalls a request he received when he served St. Paul Lutheran, York, Pa.: “It was my second or third week there and one of the members of the congregation, who was a farmer, met me in the hallway and said, ‘Pastor, we need a CROP chairman.’ ”

A few farmers in the congregation participated in the York County Council of Churches’ CROP Committee. Sowers said they wanted to take their program to a new level, and he helped them with fundraising ideas.

Sowers planned an event where participants could be sponsored for each mile they walked. Today, CWS estimates that more than 1,000 walks take place nationwide every year. In 2018, more than $8.3 million was raised through CROP Walks.

“I’m not special in any sense,” Sowers said. “I’m amazed at what has happened from that first walk. So many others have helped. I’m glad to have been a vehicle for that to happen.”

This year’s walk in York takes place Oct. 13 and aims to raise $50,000, said Sowers, who helped organize it and plans to participate.

Sowers said he feels God’s spirit most deeply when participating in hunger ministry. “Our Christian faith motivates us to be tireless in our efforts to reach out to the poor and hungry,” he said. “The essence of our humanity requires empathy and action if we are to follow Jesus’ command to love one another.”

While many congregations participate in CROP Walks, Good Shepherd Lutheran in Janesville, Wis., is one of the top teams. The congregation has walked for approximately 30 years, said Todd Sullivan, its team captain. This year’s walk, which was held in April, raised approximately $50,000.

In addition to raising money, Sullivan said the walk increases awareness of food insecurity. “We’re educated on local and worldwide hunger needs, and how all of us working together are making a huge difference,” he said. “We’ve had clergy and lay leadership partner in promoting and organizing for the walk, and we strive for full parish participation from all ages.”

Reflecting on this anniversary year, Sowers said he never would have thought the CROP Walks would live on this long. “What I learned from this experience is that God’s call is not always clear, and more times than not I want to resist,” he said. “But at the end of the road, when I am fortunate enough to see where this is taking me, my heart is filled with gratitude and thankfulness that I did respond and that I started walking for the hungry.”