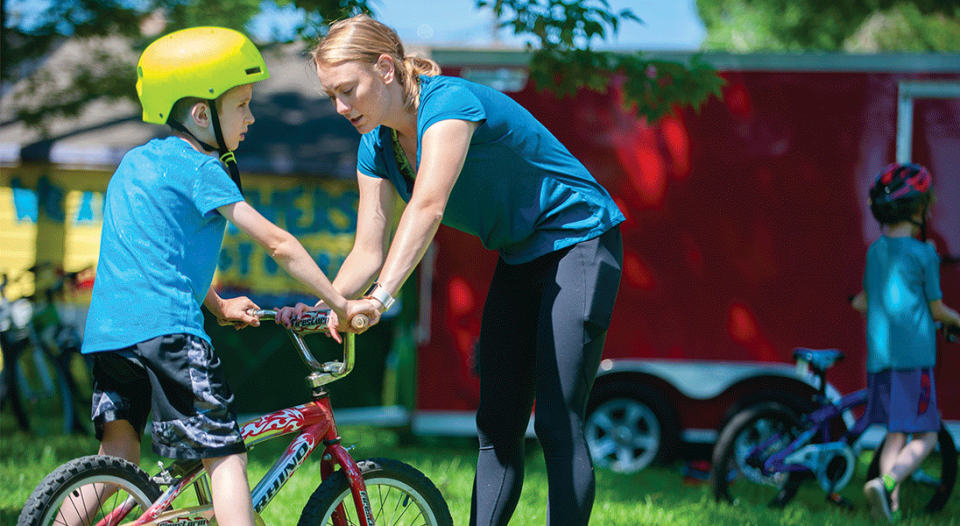 A humid Minnesota summer afternoon finds about 40 kids gathered at Redeemer Lutheran Church in the Harrison neighborhood of Minneapolis. Some kids ride loops around the church grounds on new bikes, while others are being fitted with their own bike. They are participants of a youth bike camp hosted by Venture North, which supports and fosters community through bikes and coffee.

The camp was co-organized by Sara Hovren, manager of Venture North, a social enterprise of the congregation’s Redeemer Center for Life, and one of four Lutheran Volunteer Corps (LVC) members at Redeemer. LVC connects young adults with social-justice organizations such as Venture North and helps secure them full-time service positions for one year.

This fall LVC celebrates its 40th anniversary. The program began in the late 1970s as a small group of short-term volunteers organized and sponsored by Luther Place Memorial in Washington, D.C., as the congregation’s response to the needs witnessed in their community. The program officially incorporated in 1979 and transitioned into yearlong service commitments at D.C. area organizations.

Forty years later, the legacy of Luther Place’s original initiative lives on as the newest generation of volunteers settled into their new homes and positions in August. Since its incorporation, more than 2,800 people have served through LVC.

The program provides spaces for young adults to ponder questions and create practices around its core values of social justice, simple and sustainable living, spirituality and intentional community. These values are often the primary factors in someone’s decision to participate in LVC.

“I see service as literally living out what Jesus stood for, and I applied to LVC because I thought it would give me a way to do that.”

“I wanted to be a part of LVC because the program cared about understanding faith and spirituality within social justice,” Hovren said. “I wanted to learn how to serve in an ethical way that prioritized dignity and respect but also provided resources, and to understand how to do good work while understanding my own identity. I was having a hard time putting it all together in undergrad and needed more time to do that, so I applied for LVC.”

Though practicing Christianity is not a requirement in LVC, some participants, like Hovren, are drawn to the program to express their faith through service. “Believing in Jesus, to me, means sitting with those who have been cast out by society’s norms,” she said. “I see service as literally living out what Jesus stood for, and I applied to LVC because I thought it would give me a way to do that.”

For Gary George, an LVC alumnus from 1987 to 1988 in Washington, D.C., faith was a critical piece of the experience. He served as volunteer coordinator at Zacchaeus Medical Clinic, at that time part of N Street Village, after graduating from Trinity Lutheran Seminary in Columbus, Ohio.

“LVC changed the course of my life,” George said. “Following my volunteer year, I was ordained, but my LVC year helped me realize I was drawn to ministry and service outside of the walls of a congregation and more traditional parish pastoring. It seems so much of my life as an LVCer was a way of living out my faith.”

George’s journey after LVC led him to work for a variety of nonprofit social justice organizations. He currently serves as the executive director of Hospice House—The Josie Harper Residence in Omaha, Neb., a position he’s held since 1998. Under his leadership, an LVC position has been established at the residence.

While the values of LVC have remained central to its mission throughout its 40-year history, the program has evolved and adapted throughout the years. Once placing volunteers in 12 cities across the U.S., the program has now consolidated to six cities: Washington, D.C.; Baltimore; Wilmington, Del.; Minneapolis and St. Paul, Minn.; and Omaha.

Deirdre Bagley, LVC president, said the economy has been the strongest determinant for program recruitment. “There’s expanded interest from applicants when the national job market constricts and there is less employment opportunity, and declining interest in LVC and other peer service programs when U.S. jobs are plentiful,” she said.

“As LVC recognizes 40 years with celebrations in Washington, D.C., Minneapolis, Omaha and Wilmington; an anniversary yearbook memorializing alumni experiences in days past; a $4-40-400-4,000 campaign; and the raising of stories from the past and visions of the future, we are excited and hopeful about the next 40 years.”

Next month: Young Adults in Global Mission volunteers reflect on their vocation.

Alive in the church: A series introduction