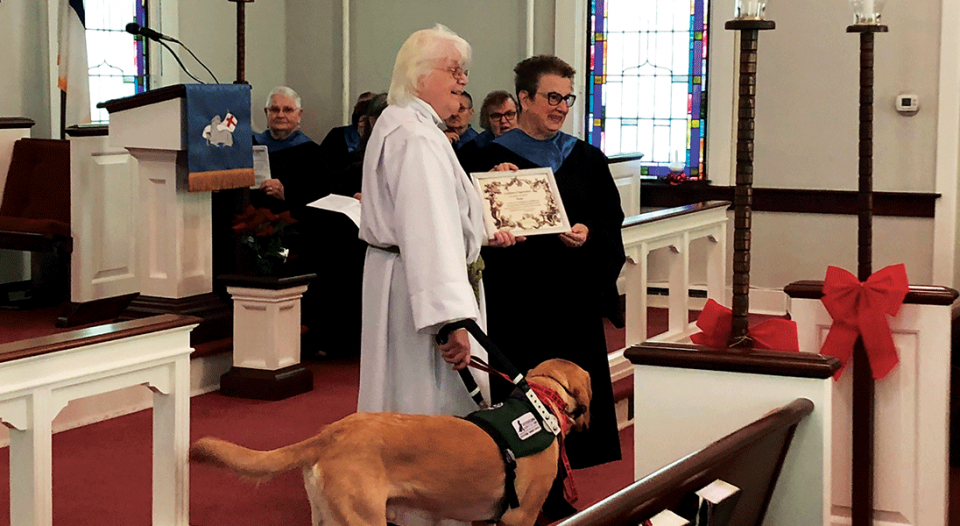 Elaine McCracken, a member of Faith United Lutheran Parish in Dillsburg, Pa., has a friend to count on when she needs it. That friend is SSD Moses, a three-year-old Labrador retriever who keeps her standing whenever she’s in danger of falling.

McCracken, 77, got SSD Moses after recovering from surgery to remove a benign brain tumor. Lingering effects from the tumor include balance problems that cause her to fall backward. “I’d fall over once or twice a week,” she said. “I cracked my ribs once, and I fell down some stairs. I was a danger to myself.”

That was before SSD Moses came along. A harness worn around his middle allows him to feel when she is about to fall. “He throws his whole body in the opposite direction and keeps me upright,” she said. “He knows to jerk forward.”

The SSD in Moses’ name stands for Susquehanna Service Dogs, which matched and trained him for McCracken. The organization has placed more than 300 service dogs in Pennsylvania and surrounding states.

McCracken’s dog received a certificate of appreciation that names him as an honorary member of the parish.

McCracken felt an immediate connection with SSD Moses. “He came over and stayed with me and started working with me,” she said. “We bonded instantly. He was mine.”

A retired math teacher, McCracken fills in as a lay minister at Faith United when needed. The parish includes St. John’s Franklin and Barren’s United in Dillsburg, plus Emmanuel in Franklintown.

As pictured in a video posted on Susquehanna Service Dogs’ Facebook page, SSD Moses is at McCracken’s side when she preaches. He even received a certificate of appreciation that names him as an honorary member of the parish.

Like many Lutheran congregations across the U.S., Faith United recognizes the significant roles animals play in our lives with an annual pet blessing in October, and McCracken makes a point of attending with SSD Moses.

Roy Stetler, pastor of Faith United, said the blessing honors Francis of Assisi, whose feast day is in October. “He was the saint who had more to do with animals than any other saint,” he said. “It’s just a great way to bring to the church those creatures that enrich our lives with so much added meaning. Animals ground us in reality and remind us of what’s important.”

Stetler has noticed how SSD Moses has helped McCracken stay active and involved in her congregation and community. “He gives her stability,” he said. “It’s like having a mobile walker. He’s a strong dog. If she has a hiccup [in her balance], she leans on him and he’s there for her. He’s a good dog for her.”

Now McCracken is no longer afraid of falling. “I was very hesitant and very specific about what I could do,” she said. “[SSD Moses has] given me my freedom back.”

To watch a video of this story, click here.

How pets influence our faith

Blessing of the animals

Can dogs go to heaven?