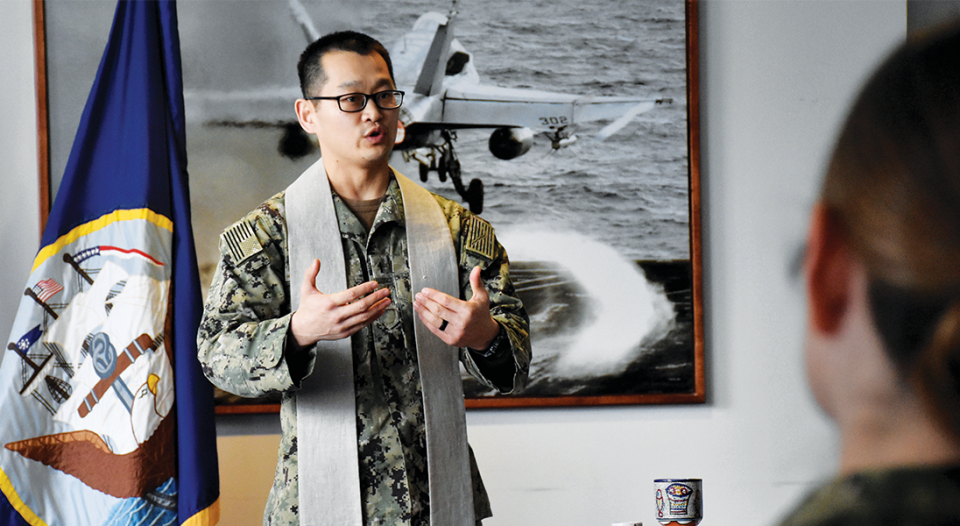 I’m a Navy chaplain, a former submarine warfare officer and a military veteran of 18 years, but I have trouble finding the words to talk about my ministry to veterans and to give voice to the experience of military service. Despite my experience of multiple deployments and the fast pace of daily military life, I’ve never been on the front lines of combat, and I’m not dealing with the well-known effects of trauma that so many veterans struggle with today.

I’ve just returned from my most recent deployment and, while the “operational tempo” was high, this wasn’t my most difficult one, and Europe is hardly a dangerous environment. I did my job, and now that I’m finished and back in the United States, life can return to normal.

But life has felt anything but normal. The pace has been nonstop: deciding where to live, getting belongings moved, starting new employment, reestablishing connections with my synod, and responding to requests from family, friends and colleagues I haven’t seen in a year. There hasn’t been a lot of time to decompress and process my deployment—the physical, emotional and spiritual fatigue; the questions; the disappointment and sadness; the joy and success.

People don’t know how to respond to my cynicism, my burnout and my sobering declaration that my deployment was “just another job.”

There also aren’t a lot of people to talk with about my experience. People try their best to listen and, while I appreciate their effort, I can see in their eyes they’re uncomfortable. They don’t know how to respond to my cynicism, my burnout and my sobering declaration that my deployment was “just another job,” thereby deflating their romantic view of my “sacrifice.”

I sense my words and mere presence make them feel awkward. Not wanting to be a burden nor take out my frustration on them, I stay silent. But the silence is isolating and is almost too much to bear sometimes. In those moments, even God feels far from me.

As a Navy chaplain and a Lutheran, I know that faith hinges on this: God is near in these moments, especially in these moments. God is near even when I don’t feel or believe it. I know it takes time for the Spirit to work in me and, through others, to heal me, to make sense of the many things that don’t make sense right now and to make me whole.

Right now, dealing with myself and others takes a tremendous amount of grace. At times the challenge is overwhelming, but I take it day by day.

We aren’t willing killers carrying out oppressive agendas, nor do we all view ourselves as heroic defenders of freedom. We are simply human.

My hope in sharing this is twofold. First, I want all my brothers and sisters who call themselves “veteran”—whether they’ve served in combat or in peacetime operations—to know they’re not alone. Feelings of awkwardness and isolation and questions of belief happen—even to the chaplain. My hope is that, as you realize your own struggles, you remain steadfast in the most important battle we fight—the battle of faith. In moments of question, isolation and unbelief, I pray you will hold fast to the truth that God is near and redemption is possible.

My second hope is for people reading this who don’t claim the title “veteran.” I ask that you put aside your assumptions of veterans and military service, whether overly critical or overly romantic. We aren’t willing killers carrying out oppressive agendas, nor do we all view ourselves as heroic defenders of freedom. We are simply human.

Seek out a veteran as one in need of God’s presence, grace and redemption. Connecting won’t be easy, as only about 7% of our nation’s population are veterans and fewer than 1% are actively serving. Trying to connect might just take an act of faith, an act that you and our veterans won’t regret.

Ask them about their stories