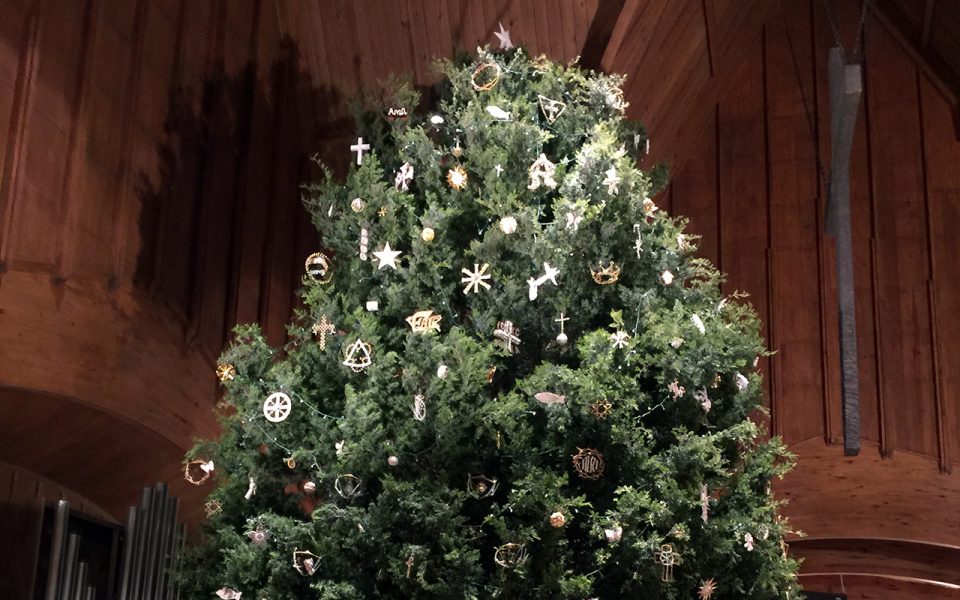 In the spirit of Christmas, many congregations decorate evergreen trees for their sanctuaries. Often these trees are covered in white and gold ornaments in the shapes of religious symbols and ancient Greek letters, such as the ichthus, or fish, the symbol for Christianity. These handmade ornaments are called Chrismons, short for Christ monograms.

Chrismon trees are found around the country, but they’re abundant in the Virginia Synod, with churches like St. Mark, Charlottesville; Trinity, Stephens City; Christ the King, Richmond; and many others decorating with these ornaments.

Virginia is the home of the Chrismon tree because the concept was developed by the late Frances Kipps Spencer, a member of Ascension Lutheran Church in Danville, Va. In 1957, this daughter of a Lutheran pastor and missionary began making ornaments for Ascension’s tree to replicate religious monograms and symbols. She called them Chrismons.

From those early beginnings, Spencer’s tradition has spread. She even wrote five books on Chrismons, including patterns for making them, which can be quite elaborate.

Spencer is said to have felt that garish ornaments had no place in church and that a tree should tell the story of Jesus’ birth and life.

The Danville Museum’s account of Spencer says: “Mrs. Spencer asked, ‘How would Mary celebrate Jesus’ birthday?’ The answer from our culture and time period would be to have a cake with candles and his name on it. Mrs. Spencer then looked upon the traditional Christmas tree as a cake and placed on the tree the name Jesus and his title, Christ. Instead of using the name and title in English, however, she used Greek monograms. Thus the letters in Greek, ‘Chi Rho,’ became one of the earliest Chrismons because they are the monogram for Christos, the Greek word for Christ.”

Spencer’s legacy lives on at Ascension. Kate Albright, a 22-year member of the congregation, chairs the Chrismon ministry, but she said it takes a village. Just getting a tree large enough to accommodate Ascension’s hundreds of Chrismons takes a team. And decorating an 18- to 23-foot tree requires tall ladders and a cherry picker, and it takes more than a week to accomplish.

“I also see my role as being true to Frances Kipps Spencer’s intentions,” Albright said. “She had a vision to tell the story of Christ’s love for us, and everything on the tree must say that. I have to stay true to that, especially because it’s part of our history.”

While the congregation has enough ornaments, it still holds Chrismon-crafting workshops to help people learn the art. “I learn new things every year when we make ornaments,” said Albright, adding that she’s often contacted by churches all over the country about Chrismon crafting.

“She had a vision to tell the story of Christ’s love for us, and everything on the tree must say that.”

Ascension’s Chrismon tradition begins in January when the team starts looking for a donated tree. “We cruise the county’s back roads and look for a special specimen and ask if we can cut it down,” Albright said. “Most folks are generous; our Chrismon tree is fairly well-known.”

The tree standards are lofty. In addition to a certain height, it must be “cedar, thick trunk, single trunk, symmetrical,” Albright said.

Eddie Turner is responsible for approving the tree selection, chopping it down and getting it into the church. The retired telephone lineman has no qualms climbing into the cherry picker. The lifelong Ascension member has been working with the Chrismon ministry since 1975 and knew Spencer.

“The ministry is more than a tradition,” Turner said. “It’s something that we give to the community each year.”

Ascension offers tours, and Turner estimates that as many as 2,000 people see the tree every year. This year, Ascension is on the local historical society’s holiday tour.

Turner remembers the year the Smithsonian Institution asked Ascension to put a Chrismon tree in its museum. “Once a display comes in, they own it,” he said, “so we made duplicates of our Chrismon ornaments.”

He also remembers when a big-box store sold Chrismon patterns as its own, causing Ascension to file a trademark. “I was there when we had to defend the trademark,” Turner said. “We didn’t want anyone to make a profit off of Chrismons. It’s religious and should be given freely.”

Continuing the ministry, which takes a lot of time and physical effort, is a big worry for Turner, who said the congregation is aging and might not have the stamina much longer. “I would like to see the ministry continue,” he said.

Albright agreed: “I pray about the Chrismon ministry all the time. The mission is to tell the story of Christ. If this ministry is to continue, God will do that. A way has been found every year. I have to have faith and hope in that. If the will and power of God want it, then it’ll happen.”

What are the 12 days of Christmas?