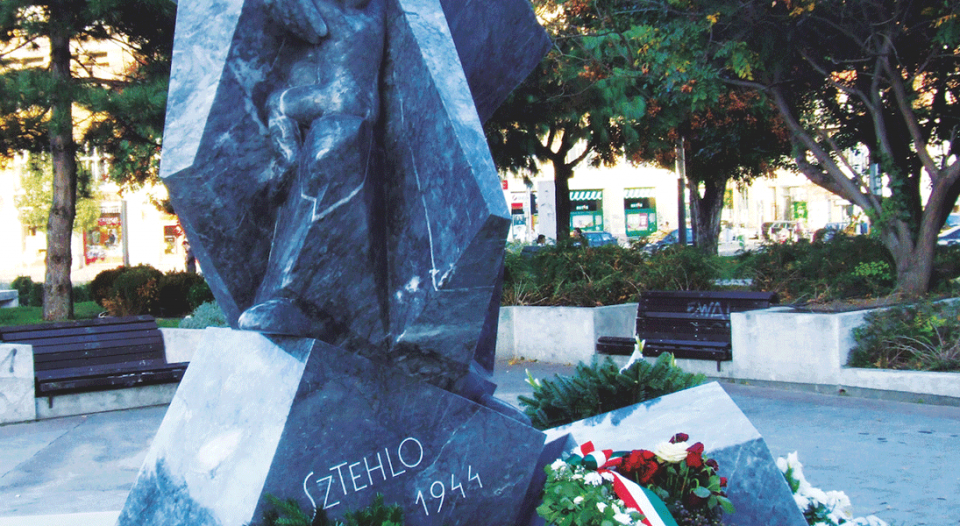 A monument to Gábor Sztehlo created by Vígh Tamás, whose brother was a “Sztehlo child,” stands in Budapest’s main square.

Lovely and historic Budapest was a very different place in 1944. The German army invaded Hungary early that year, and months later the country’s fascist, anti-Semitic Arrow Cross Party took control of the government. According to the United States Holocaust Memorial Museum, 440,000 Hungarian Jews were deported from May through July 1944 alone. Most of them died in the gas chambers.

One poignant reminder of those years is the long row of iron shoes displayed along the Danube River in Budapest. Known as the “Shoes on the Danube Bank,” the memorial honors the murder victims of the Arrow Cross militia during the German occupation. According to history.com, 565,000 Hungarian Jews were killed, which left Budapest with the sole remaining Jewish community.

Yet, amid all that darkness, Lutheran pastor Gábor Sztehlo inspired quite different monuments. One such memorial in Budapest today reads: “Gábor Sztehlo (1909-1974), Lutheran pastor, saved with God’s help around 2,000 children and adults during the rule of the fascist Arrow Cross Party, and later gave the orphans [a] home, faith and dignity.”

“He was a true Lutheran who represented God’s love in the darkest time of history,” said Dóra Laborczi, author of We Were Sztehlo Children (Luther Publisher, 2018). It’s based on firsthand interviews with the now-grown children saved by Sztehlo, who is sometimes called “the Lutheran Oskar Schindler.”

“He was a true Lutheran who represented God’s love in the darkest time of history.”

Sztehlo’s ministry emphasized both faith and practice, Laborczi noted. From the beginning, his work focused on human need. After his theological training he directed a high school where democratic and student integrity were encouraged.

After the Nazis invaded Hungary, both Sztehlo’s life and that of his country changed abruptly and dramatically. But he always sought to follow Christ in times of peace and war.

These were horrific and dangerous times, not only for victims of the Holocaust but also for those trying to help them. People defying the Nazis were imprisoned or killed. Despite this danger, the Evangelical-Lutheran Church in Hungary (ELCH) worked through the Protestant Good Shepherd Committee, which Sztehlo oversaw, to rescue abandoned Jewish children.

The Good Shepherd Committee, begun to aid the families of men who had been thrown into forced labor camps, eventually established 32 homes to house the Jewish children. The committee provided false documents attesting that the children were Christians so the Nazis wouldn’t recapture them. Later, Sztehlo opened up the committee’s work to include imperiled Jews of all ages.

The trauma of Budapest’s Jewish population was far from over—and neither was Sztehlo’s work. At the end of 1944, the Soviet army attacked the Germans in Hungary and besieged Budapest. The ensuing bombardments destroyed most homes there.

In response, Sztehlo and his wife brought 33 children into their home. He enlisted several friends and relatives in the housing effort and established the PAX (Latin for “peace”) hospice system for orphaned children.

Even those efforts were too small to meet the needs of some 200 orphaned, desperate and dispossessed children, most of them Jewish. In 1945, while the Soviets controlled Hungary, Sztehlo found an abandoned villa in a less-bombed-out area of Budapest. The number of children who found shelter there grew, including those categorized as “class aliens” under the communist regime.

PAX enabled larger numbers of youth and children to be served in many more ways. Although the system’s 30 hospice homes were illegal when Sztehlo established them, the Hungarian government nationalized them in 1950.

After PAX passed into the Hungarian government’s control, Sztehlo returned to church work—albeit doing similar service. He began organizing hospices for people with physical or cognitive disabilities or who were orphaned or dispossessed by the war. Altogether, Sztehlo saved about 1,600 Jewish children and 400 adults.

The now-grown “Sztehlo children,” who called him “the Good Pastor” or “the One True Man,” are making sure his legacy endures.

Two years before his death in 1974, Sztehlo was the first Hungarian awarded the Yad Vashem “Righteous Among the Nations” honorific, given by the State of Israel to non-Jews who had aided Jews during the Holocaust.

“[Sztehlo] did not see where the person came from, he saw that he or she is a unique creature of God and needs his protection,” Laborczi said. “He also taught them—those very traumatized children—how they can live together under [God’s] wings. They all are brothers and sisters. This attitude is very needed today as well.”

The now-grown “Sztehlo children,” who called him “the Good Pastor” or “the One True Man,” are making sure his legacy endures. The Gábor Sztehlo Foundation for the Support of Children and Youth was established by his former pupils, wards and co-workers to aid youth at social institutions as they prepare for independent lives. The foundation has served hundreds of young people in its first 10 years.

The “Sztehlo children” also worked to erect a monument to Sztehlo that now stands in Budapest’s main square. Vígh Tamás, whose brother was a “Sztehlo child,” created the statue.

Sztehlo didn’t have power or fame, but he had a passion wide enough to grasp the forsaken and deep enough to embrace the forgotten. His example inspires Lutherans—and others—to this day.


Ronald K. Bullis, who holds a doctorate, Juris Doctorate and Master of Divinity, has been a Presbyterian Church (U.S.A.) pastor for 40 years.

My take: The gates of deep darkness

“E Pluribus Unum Deus”: Out of many, one God