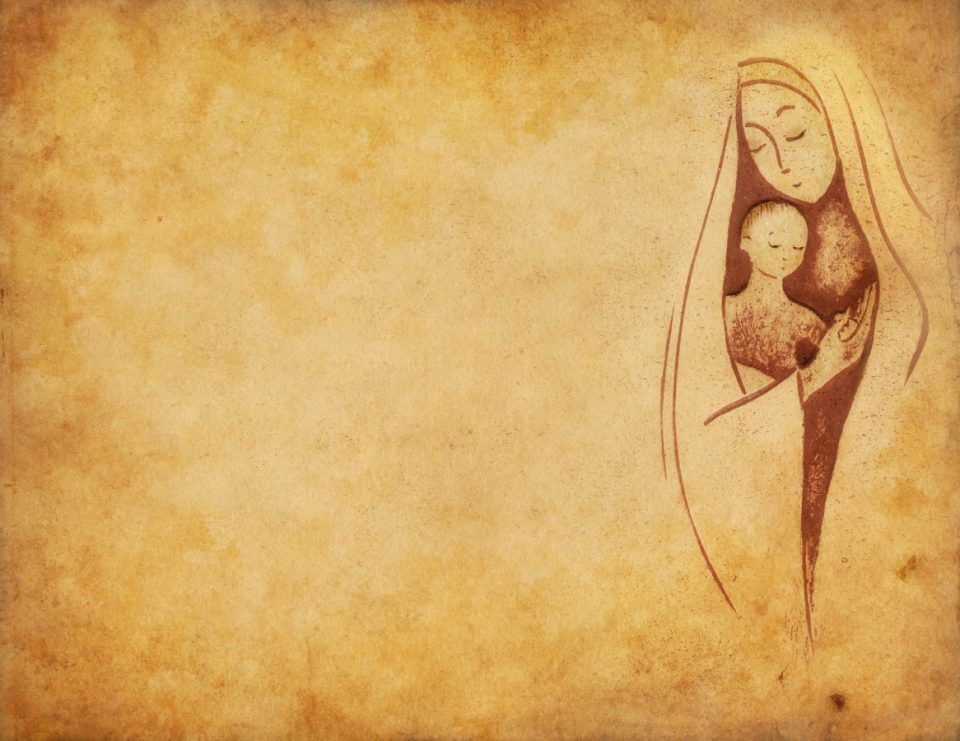 Every December, I take somewhat dark delight in viewing (Google it for grins) a 1926 painting by German artist Max Ernst titled “The Blessed Virgin Chastising the Infant Jesus before Three Witnesses.”

Mary is wearing a red dress and appears to have temporarily lost it with her son—a young boy in the painting—whose rosy upturned bottom draped across his mom’s knees suggests some sort of boyhood mischief has just gone down in the Lord’s hometown. The artist depicts Jesus’ halo resting on the ground. Mary’s remains intact.

The painting seems to reveal the artist’s sympathies toward an earthly parent raising such a son. We don’t know a lot about Jesus’ childhood (an apocryphal tale about the lad turning a bully into a bird was wisely left out of the biblical canon), but Mary’s days were surely sometimes trying.

Her son, age 12, going missing in Jerusalem for 72 hours (Luke 2:41-51)—even in an era well before snatched children began appearing on the back of milk cartons—discloses how Mary’s job description as “Mom to the Son of God” was a bit more than she bargained for upon saying, “Yes, let it be” (1:38), following the angel Gabriel’s unusual invitation. (Perhaps Paul McCartney missed this tension 20 centuries later as he composed a famous Beatles song seemingly dependent on Mary’s humble agreement.)

Upon listening to the very understandable “great anxiety” shared between “your father and I” (2:48) during their frantic search—ominous, guilt-inducing words any soon-to-be teenager never wants to hear—the boy Jesus offers a surprising counter-question to his parents given his adult affection for the fourth commandment: “Why were you searching for me?” (2:49). Quite the sassy reply, no matter how you parse it.

I’m rather fond of the Lord’s sassiness during his adult ministry as he occasionally mocks and shows up those in charge, but, for the record, this impertinent response would not have flown with Ruth Honeycutt in my childhood home in Chattanooga.

Mary should be remembered for much more than her notable virginity. Birthing Jesus may have been a walk in the park compared to raising the boy.

The artist guides his brush to tweak our convictions concerning the never-to-be-easily-resolved duality of Jesus’ origins. Or, as the Nicene Creed puts it: “True God from true God” who “became truly human.”

I love the beautiful carol “Away in a Manger” (long attributed to Martin Luther and now thought to be thoroughly 19th-century North American), but I try not to get distracted each Christmas Eve while singing: The cattle are lowing; the baby awakes, but little Lord Jesus, no crying he makes.

Now, come on. No crying? Most infants of my acquaintance do a fair amount of wailing upon waking from sleep, especially when startled by a bovine choir.

I suspect this sentiment attempts to reinforce the idea that Jesus was special, precocious and unique among babies. (He was.) But it also misses the truth that the child was fully human and undoubtedly cried, messed his diapers, threw a tantrum or two, and grew up into a teenager with occasional rebellious and haughty moments.

In Giacomo Sartori’s entertaining novel I Am God (2016, translated from the Italian), the Creator reports that a modern expression of the incarnation would include an immersion in “normal things: squeeze onto the bus at rush hour, shop in shopping centers mobbed with people, watch a TV series sprawled on a sofa. I’d sample the whole palette of human sensations.”

I’m convinced Jesus didn’t pop out of his mom’s womb preprogrammed to always do and say the right and perfect thing. This last sentence may unnerve some Lutherans, but denying the statement also calls into question the beautiful mystery inherent in our creeds. At Christmas, the incarnation trumpets not Jesus’ divinity or humanity (choose one), but instead wondrously both.

My take: Mary as a figure of power