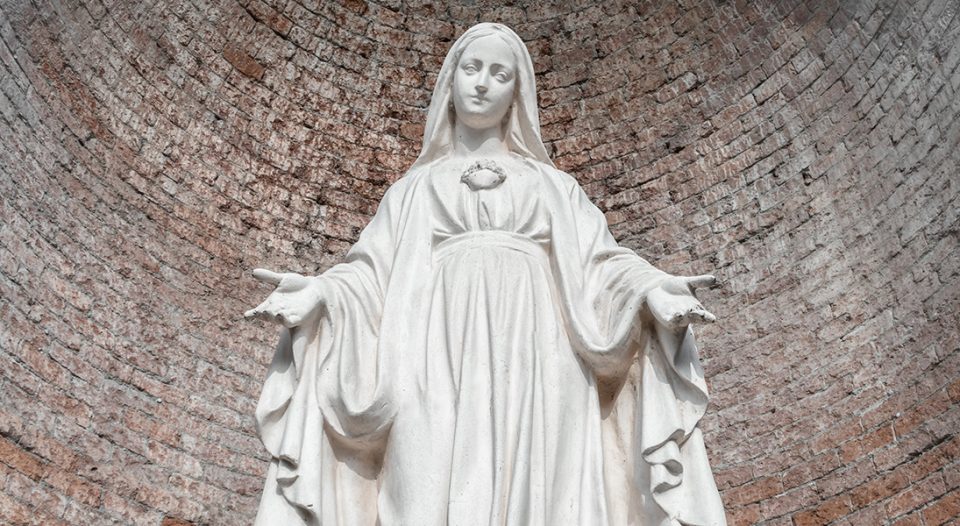 I have always loved Mary, the mother of our Lord, and each year she becomes more important to me. But my love for Mary does not come from admiration of her supposed meekness, about which we have often heard. She is wild and powerful, whole and free, confident and intense. She is woman, in its most beautiful and holy sense.

Martin Luther also loved Mary, because he was trained as a Roman Catholic. However, he discovered that he could approach the throne of God with a peace he had not previously realized, and thus needed no mediator in Mary or any other saint. Mary, he said, was Theotokos (“God-bearer”) but not a necessary intercessor for a believer’s intimacy with Christ. Lutherans have respected her, but we often miss seeing and celebrating her immense power, unique among biblical or historical figures.

Mary did more than pave the way for us to see and know her son. She also stands in her own right as a primary figure. Our love for Jesus and our ability to approach him directly is not threatened by our appreciation for his mother.

Mary is called “virgin” (in Greek, parthenos), which in ancient times meant “woman whole unto herself.” The biblical writers show her selfhood, apart from being a man’s property, as women were thought to be in those days. There are virgin-birth stories in Egyptian, Aztec, Greek, Roman and Chinese mythology, and many people assume these imply a critique or fear of female sexuality. But the original intent could very well have been an assertion of strength and intimacy with God.

As a counterpoint example, we know of the three virgin Greek goddesses: Athena, goddess of war and wisdom; Artemis, goddess of animals and the hunt; and Hestia, goddess of hearth and fire. No one would consider these virgins weak, childlike, unstable or lacking in bold female power. Rather, these three were “perpetual virgins” because they were perpetually self-contained. Mary, therefore, as a “woman whole unto herself,” did not need to be known as “Joseph’s wife.” She was Mary, a name—a self—which was not a given for women in first-century Palestine.

The Bible is full of encounters between God and the prophets. The word “prophet” comes from the Greek term for spokesperson or mouthpiece. Those called upon to be God’s mouthpiece frequently protested God’s will: Moses insisted he had a speech impediment; Jeremiah protested that he was only a boy. I can understand this—following God’s will and being utilized by God is not easy! However, Mary, the God-bearer, asked only a scientific question: “How can this be?”

Lutherans have respected Mary, but we often miss seeing and celebrating her immense power, unique among biblical or historical figures.

Mary protested strikingly little when called upon to bear and deliver God’s will to the world in the form of the incarnate Jesus Christ. She could not have been stronger as she said “yes” to bearing the Messiah in her body, then sang her radical (and dangerous) social manifesto, the Magnificat (Luke 1:46-55).

When we view Mary as a mythological or psychological archetype, she represents the Divine Feminine, the Queen of Heaven referred to in Revelation (12:1-3). As Christ is the New Adam, Mary is the “New Eve”—the most ancient doctrinal title of Mary in the early church. It is no wonder that Mary has held prominence in parts of the world known for goddess religions (Ireland and Mexico, for example). She’s a powerful psychological archetype, a fact Protestant churches have largely forgotten.

Now, of course, ELCA Lutherans and many others ordain women as pastors and deacons, so we clearly have not lost the feminine voice. The struggle for ordination was hard-won, and I remain deeply grateful to serve in ministry. However, we now can delve even more into what it means to have a uniquely feminine voice.

While in seminary, I and other women were allowed to enter into what sometimes seemed like a (stereotypically and archetypally) masculine church. We learned about intellectual theology, systems of power and structure, and institutionalism. In my wonderful years studying theology, I learned surprisingly few spiritual disciplines and didn’t always delve deeply into sacraments. Years ago, when I was Catholic, I observed that theology was kept in the hands of the few—but spirituality, emotions, sacraments and even mysticism were emphasized. This all comes from a feminine understanding.

The Catholic Church will most likely not ordain women any time soon, as a worldwide expression of church is slow to change. Yet it does have a tradition of opening up to the Divine Feminine, to feminine ways of knowing. Could we learn from that aspect of the worldwide church? Could the image of Mary help us?

We do not need to view Mary as a mediatrix, a necessary intercessor, a hindrance to our sense of intimacy with God in Christ. We can remain grateful for, and faithful to, our Lutheran theology of direct encounter with our loving, grace-filled God. But Mary can serve us as a powerful example of faith and purpose, of feminine intuition and strength, of grace, love and truth.

She is all these things for me, and this does not hinder my spirituality as I approach Christ or my sense of womanhood. Instead, Mary informs, inspires, strengthens and confirms my uniquely female ways of being and knowing—as a woman, a pastor and a powerful person of God.

Stephanie Lape
Stephanie Lape is a rostered minister in the ELCA, serving Cross and Crown Lutheran Church in Rancho Cucamonga, Calif. She lives with her husband and teenage children in Corona, Calif., writes and speaks on spirituality and interfaith dialogue, and is the author of Beckoned: Hearing God's Call to Deeper Faith. Learn more at stephanielape.com.

The mother of our church?

Mary, the mother of Jesus