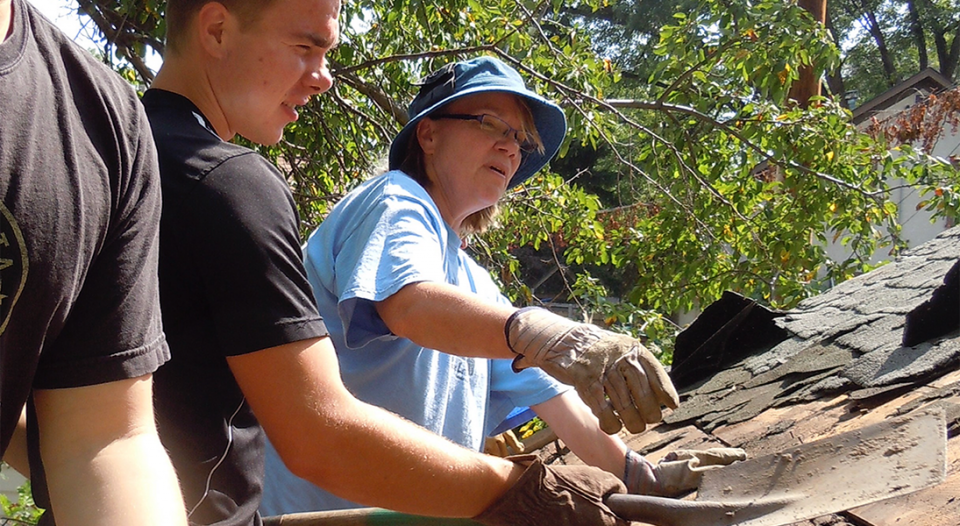 Members of Peace Lutheran Church in Lauderdale, Minn., work on a roof project as part of the congregation's community service event called "Christmas in August."

Dave Greenlund has a reputation in Lauderdale, Minn., a little town surrounded by Minneapolis, St. Paul, Roseville and Falcon Heights.

He didn’t think he would get a reputation. He just thought serving Peace Lutheran, the church in the neighborhood where he lived, would be nice for a few years or however long he and the congregation could make it work.

When he first became pastor of Peace in 2004, the congregation was on its last leg. Every week the bulletin noted how much money the congregation had left and how many weeks their ministry could continue. The numbers were in the single digits.

“We’re a dying congregation,” the call committee had told Greenlund in his first interview.

Most pastors would have run the other way, but Greenlund isn’t most pastors. When asked how he thought he’d survive financially if the church closed, he said, “People in my past, they always used to say I was like a cat. Somehow, no matter what happened … I’ll land on my feet.”

Having grown up in poverty, Greenlund had plenty of side hustles. He had taught pottery, and he knew he could always do construction and home improvement jobs.

First, though, this little congregation that called itself dying would have to be resurrected, and Greenlund didn’t pull any punches: “The first Sunday I got there, I told them, ‘You guys have given me misleading information. You’re not a dying congregation. You’re dead.’”

The parishioners didn’t leave in anger that day, but stayed and listened to what he had to say.

Peace was originally a member of the Lutheran Church–Missouri Synod but questioned official doctrine regarding women in leadership and who could receive communion. In 1991 the congregation joined the ELCA and began practicing radical inclusivity—extending a wide welcome. But people in the neighborhood didn’t know much about the church.

“They were so determined to stay viable and life-giving for the neighborhood.”

Lynn Berkeland, Peace’s secretary, and her family had drifted away from the church after her sons were confirmed. They didn’t return until one of Berkeland’s sons faced mental health challenges and her husband recommended that the boys find a spiritual connection in their lives again. By this time, Greenlund had been serving at Peace for seven years.

When Berkeland’s sons came home from church, they reported that things had changed.

“Good or bad?” she wondered, skeptical.

“Good,” they promised her.

Soon, Berkeland returned to Peace. All the pews had been removed from the sanctuary, and people sat in a circle for worship. Sometimes Greenlund would stand and preach on a chair. Berkeland said it was like theater in the round.

But the true change at Peace went far beyond Sunday-morning worship styles.

Change can be hard in a church environment, but Peace gathered up its strength to try something new, despite what little money and people existed for the effort.

“They were so determined to stay viable and life-giving for the neighborhood,” Greenlund said.

Early in his call, Greenlund geared up to go door-to-door to tell people about Peace, knowing that few people had ever joined a church when he had knocked on doors in the past. This time he decided to meet the neighbors with a new pitch.

Greenlund realized that many people in the neighborhood lived in modest homes that needed improvements, but most of them didn’t have the resources to pay a contractor. He and the congregation decided to do something bold.

That first year the congregation posted 700 flyers. While members were worried they wouldn’t have enough workers or supplies, only three people accepted their offer.

Nonetheless, the congregation closed its “Christmas in August” project with a big potluck open to the neighborhood—a tradition they’ve continued. Church members met people such as Daryl Goodmanson, whom Greenlund approached after learning that he had a garage and house full of construction tools.

Goodmanson wasn’t Lutheran, but that didn’t matter—everyone was welcome to participate.

“He’s just the most welcoming person I’ve ever come across,” Goodmanson said of Greenlund.

That’s what stands out about what Peace is trying to do: everyone is part of their ministry—whether rich or poor; helping with or in need of home repairs; Lutheran, Catholic, agnostic or other.

Last year that meant helping with 40 repairs. Volunteers and donations come from the congregation and community members.

So much of Peace’s story circles back to the pastor—the one courageous enough to call the congregation “dead” and give God a chance to resurrect it.

Greenlund doesn’t pretend this has been easy work. The congregation is still small. Membership doubled during his first few years as pastor, but it has leveled off since then. Finances are still tight.

Last winter was one of the worst in recent Minnesota history for ice dams, which cause leaks inside homes. After weeks spent clearing dams from other houses in the neighborhood, Greenlund fell off his own roof, broke his arm in multiple places and tore the muscles in his pelvis. He couldn’t move his left leg and initially thought he was paralyzed.

A week after coming home from the hospital, Greenlund suffered a pulmonary embolism that nearly killed him. Taking a leave of absence for a long recovery made him feel anxious.

Greenlund is doing better now, but when asked about Peace’s future, he knew better than to make too many predictions. “What I know is that we will do ‘Christmas in August’ again,” he said. “And I’ll be there.”

A commitment to service

Blessed to be a blessing

Embodying the call to “serve our neighbor”