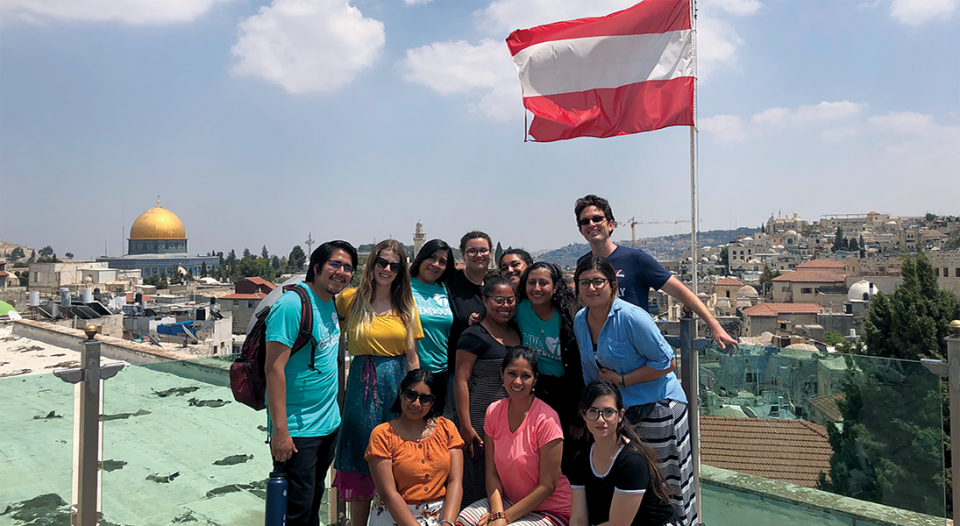 Young adult leaders of color, pictured at the Austrian Hospice in the Old City of Jerusalem, visited the Holy Land through the ELCA's Peace Not Walls campaign.

When Tuhina Verma Rasche returned to the Aida refugee camp near Bethlehem in spring 2019, she was welcomed with open arms and a warm meal.

During her first trip there two years ago, she and several other young ELCA leaders of color spent time cooking and conversing with women in the camp, learning about one another’s culture through the sharing of stories and food. It was a moment of unity—the breaking of bread bridging gaps between Muslim and Christian, American and Palestinian, and revealing how much commonality there was in their lived experiences.

For Rasche—a pastor serving a specialized call as a small-group minister at University AME Zion Church in Palo Alto, Calif.—that moment felt similar to the food-centric events found in many Lutheran churches. But it also showed the potential for much more.

“Potlucks come from the idea of an indigenous source bringing the food that represents your people in common community with one another,” said Rasche, who is a South Asian Indian American. “But what would it look like if we could expand on the idea of the potluck in church and not just have it be representative of one sole culture? What if it was opened to the global scope of who really can be the body of Christ?”

That opportunity for connection and shared understanding was what sparked the idea to send young adult leaders of color to the Holy Land in the first place.

The ELCA’s Peace Not Walls campaign, led by coordinator Karin Brown, works for peace with justice in Palestine and Israel. A key component of the campaign is bringing people to the Holy Land to engage with and learn from Palestinians and Israelis working for peace, Brown noted. Attendees return home ready to spread awareness and advocate in their communities for a just and lasting negotiated resolution to the Palestinian-Israeli conflict.

Allen saw people who hold true to their faith no matter what adversity they encounter.

Grace to be changed

Mae Helen Jackson, ELCA World Hunger’s coordinator for community engagement and granting, co-led the spring Peace Not Walls trip with Rasche. An African American born and raised in Chicago, Jackson found much to relate to in the modern Palestinian experience. The Israeli occupation of Palestine, she said, bears a resemblance to white gentrification of historically black neighborhoods, and the military violence can look like police violence against black men, women and children in the United States.

“It makes you think about why these types of things are happening all over, to varying degrees, to people who are brown,” Jackson said. “The experiences of Palestinians and people of color in America are the experiences of people all over the world.”

Although the trips occasionally involve visits to prominent landmarks, the travelers intentionally avoid tourist-focused locations in favor of opportunities to form relationships with people. Brown often tells visitors that the people living where Jesus lived and grappling with harsh realities are “living stones.”

For Nate Allen and his wife, Ingrid Damaris Fajardo Perez, who led a Peace Not Walls trip for Latino and Latina young adult leaders in 2019, the living stones encountered were inspirational figures of hope.

From Lutheran churches where worship is held in Arabic to Palestinians who hope to regain access one day to the olive groves their families have cultivated for centuries, Allen saw people who hold true to their faith no matter what adversity they encounter.

Allen has carried these moments of inspiration home to St. Paul Lutheran Church in Fullerton, Calif., where he serves as pastor. Allen, who is of Mexican, Irish and Italian descent and is married to a Mexico City native, found that his time in the Holy Land motivated him to make the ELCA a more diverse denomination that is welcoming to all.

“My goal is to educate and bring awareness to people about how to be authentic, how to accompany others and live in a multicultural setting in a way that is just and authentic,” he said. “We need to keep asking ourselves, ‘How do we have grace in our communities that opens us up to experiencing other people, and to be changed by them?’”

To watch a video story about this program, click here.

A challenge in the Holy Land

A beacon of hope in the Holy Land (part two)

A beacon of hope in the Holy Land (part three)

A beacon of hope in the Holy Land (part four)