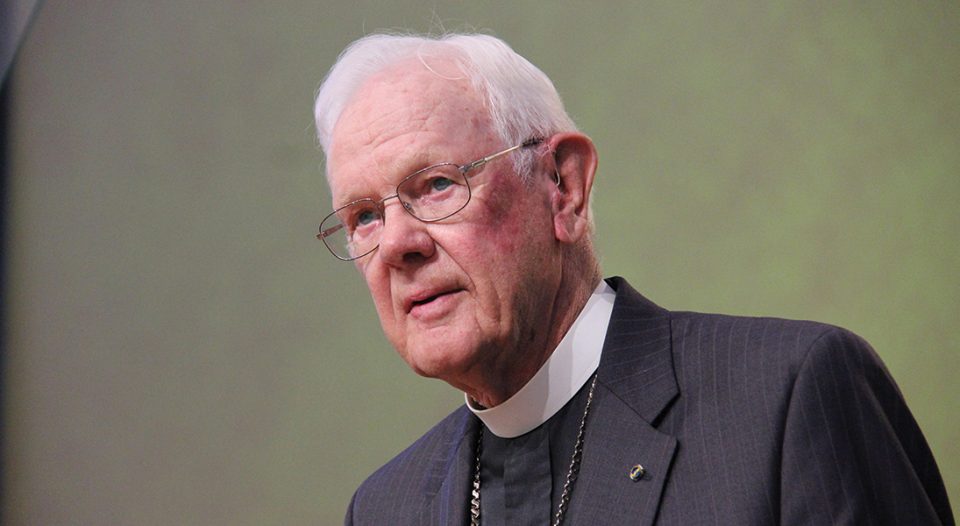 Herbert W. Chilstrom, the first presiding bishop of the ELCA, died Jan. 19 at his home in Green Valley, Ariz., surrounded by his family. He was 88.

He is survived by his wife of 65 years, Corinne—also a Lutheran pastor—two children and four sisters.

Chilstrom was born in Litchfield, Minn. He completed academic degrees at Augsburg University, Augustana Seminary, Lutheran School of Theology at Chicago, Princeton Theological Seminary and New York University, where he earned a Doctor of Education degree.

He was professor and dean at Luther College, Teaneck, N.J., from 1962 to 1970. In 1976 he was elected bishop of the Minnesota Synod of the Lutheran Church in America (LCA). At the 1987 merger that created the 5.2-million-member ELCA, he was elected the first presiding bishop.

When Chilstrom began as presiding bishop in 1987, there was no furniture at the newly opened Lutheran Center, and staff worked on folding chairs and card tables. “We literally had nothing—no phones, no paper clips,” said Robert Bacher, the first ELCA executive for administration. But Chilstrom’s faith and determination guided them.

“During the time before the actual merger, there were a lot of naysayers, and I would call him a yeasayer,” said Bacher, who had previously served as executive director of the LCA’s Division for Parish Services in Philadelphia. “He was a wonderful person to be around and to work for. I couldn’t have asked for anything better.”

Elizabeth Eaton, presiding bishop of the ELCA, agreed. In the early days of the newly formed church, she said, “He was once told by a corporate executive sitting next to him on a plane that this was no way to start a corporation and it would never work.

“Thirty-three years later we are still here, entrusted with the ministry of the gospel and serving the neighbor.”

“Give thanks and sing”

He served as Lutheran World Federation (LWF) vice president for North America from 1990 to 1997, representing the newly formed ELCA. “As one of the architects of that process, he offered his insights and gifts to the LWF in a time when its member churches embraced the gift of communion and resolved to journey into deepened relations of mutuality and solidarity with each other,” said Martin Junge, LWF general secretary.

“The LWF is grateful for Bishop Chilstrom’s leadership and work towards the unity of the church, as the one family of God,” Junge said.

Chilstrom was awarded 15 honorary doctorates by 15 colleges, universities and seminaries. He was named a commander of the Royal Order of the North Star by the king of Sweden and received the Pope John XXIII Award for Distinguished Service from Viterbo University, La Crosse, Wis., and the Servus Dei Award from the ELCA, as well as many other honors and awards.

He authored books on a range of topics, including his autobiography, A Journey of Grace: The Formation of a Leader and a Church; Remembering Dave: 28 Stories From Life With My Developmentally Challenged Brother; and When a Father Loses a Son, about his son Andrew, who died by suicide.

“No matter how insignificant one may feel, everyone should leave an account of one’s life,” he told the Green Valley News in 2012. “Even a few paragraphs may become a treasure trove for future descendants.”

After retirement he continued to be active in church and community, preaching and lecturing in many parts of the country. He became a Minnesota Master Gardener, volunteering and serving as interim director at the Linnaeus Arboretum at Gustavus Adolphus College.

Chilstrom chose “Rejoice, Ye Pure in Heart!” (Evangelical Lutheran Worship, 873) to be the sending hymn at his funeral, said Eaton. It includes the lines “At the last the march shall end; the wearied ones shall rest; the pilgrims find their home at last, Jerusalem the blest. … Rejoice, give thanks and sing!”

“Through tears, but in the sure and certain hope of the resurrection, we rejoice,” Eaton said.

The core issue: How we interpret the Bible