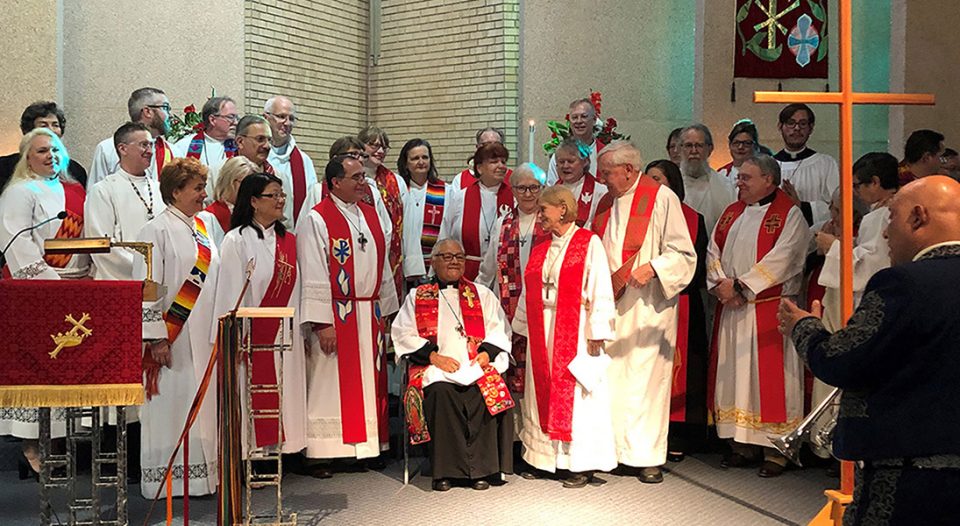 In October 2019, the ELCA Southwest Texas Synod ordained Enedina Vasquez (seated at center) as a pastor.

Raised in San Antonio as a Roman Catholic, Enedina Casarez Vasquez was 9 years old when an incident during mass changed her life.

She was waiting for her friend Tony to join her in their regular pew, but he didn’t show. To her surprise, after mass started, Tony entered with the priest—her friend was serving as an altar boy.

Watching Tony, Vasquez knew she wanted to serve and express her love for Christ that way too.

“I asked our catechism teacher to let me serve,” she recalled. “[But] the teacher said I couldn’t because girls were not allowed to serve or go onto the altar.” That exchange led her to disconnect from the Catholic Church and embark on a search for a spiritual home, which would continue well into adulthood.

Vasquez, now 74, is an artist whose work has been exhibited and sold nationally. She’s also a published author, a poet, a playwright and a writing specialist in the public schools. And she finally has a place to lead at the altar—as a Lutheran pastor—though getting there hasn’t been easy.

Over the years, Vasquez has pursued a spiritual home in her art.

“My art has always been spiritual in nature, using art as prayer in the traditions that were set for me by my ancestors of indigenous roots,” she said.

In adulthood, Vasquez became interested in the Episcopal Church after learning that the denomination ordained women. She went on to earn a diploma in spiritual formation from the Episcopal Seminary of the Southwest in Austin, Texas, in 2013. Around the same time, Vasquez said, she noticed the ELCA’s work with Latinos and that so many of its pastors were Latino. She joined the Lutheran church that same year and, in 2018, continued a group that she had started in the Episcopal Church, called Platicas de Santa Sofia, at Gethsemane Lutheran Church, San Antonio. The group helps Latina women estranged from the church find their way back to Christ.

“For me it’s about working at bringing them back to a comfort and understanding of God’s love and grace and to the fact that God has loved them all along,” Vasquez said.

The group meets twice a month to discuss spiritual topics and complete art projects, which help them connect with and express their feelings.

One of the regular attendees is Sonya Leija. She first got interested in Platicas—“conversation” in Spanish—seven years ago, when she was going through a divorce.

“I just needed guidance,” said Leija, who’d been married 24 years. “After being co-dependent for so long I wanted to see how I could become independent. I felt like it was a way to get spiritual guidance without having to go to a traditional church.”

Leija said the art projects, including wreaths for Christmas and felt-and-ribbon hearts for Valentine’s Day, have been beneficial.

“They help you relax and put whatever you’re feeling onto paper,” she added.

Vasquez said she encourages all participants to use art as a tangible form of prayer. Such ministry brought her to the attention of Judith Spindt, bishop’s associate for leadership in the Southwest Texas Synod, who encouraged her to become ordained.

“She’s brought many people closer to a relationship with Jesus,” Spindt said of Vasquez. “People who’ve never heard of the [ELCA] now know it’s a place of grace.”

After connecting with Spindt, Vasquez continued to make art, pray and connect with others while pursuing ordination.

In October 2019, the synod ordained Vasquez as a pastor. She credits the ELCA with having enabled her to realize her lifelong call to serve God.

“The Lutheran church has guided me, encouraged me and loved and welcomed me as a Latina, a woman and as a sibling of Christ,” she said.

Shortly before her ordination, Vasquez received a devastating blow. She learned she had Stage 4 colon cancer.

Now, more than ever, her faith and passion for ministry matters.

“I am not afraid, because I am on the bridge and I hear God saying that I am going to be received with open arms full of love,” Vasquez said. “I’ve had many obstacles, but the one thing that has been constant is my faith. And my hope.”

A powerful gathering of sisterhood

Be still and know that I am God