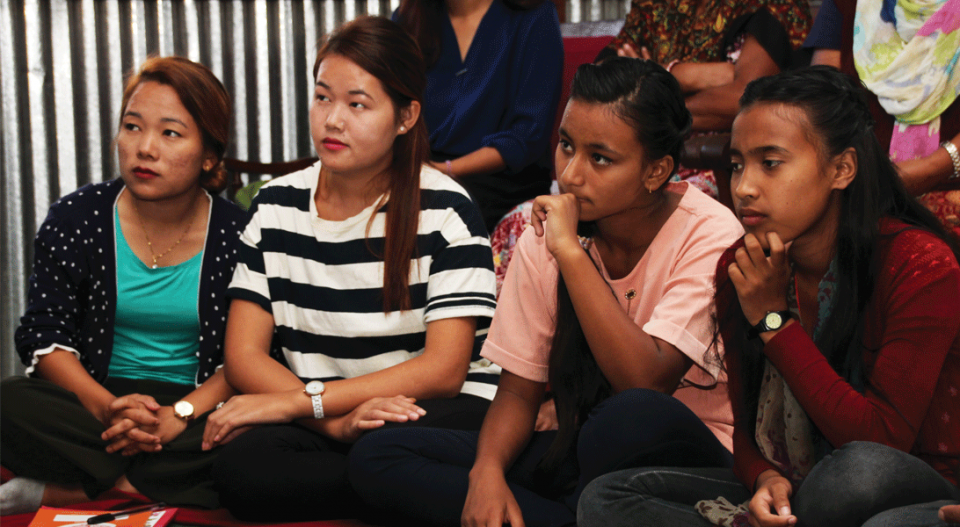 (Photo from 2019) The “Called to Care” workshops and radio series are both interfaith and intergenerational, helping connect parents with their children, such as this father-daughter duo (names withheld).

It can be difficult to disseminate information throughout Nepal, which is monetarily poor, geographically diverse, educationally unsound yet multilingual. To distribute life lessons there, one innovative social organization is using internet radio.

A quarter of the nation’s 29.7 million people lives below the national poverty line, and in 2015, the literacy rate was just 63.9%, according to the CIA World Factbook. Nepal’s population is characterized also by its youth, with 51% of the population aged 24 years or younger.

The combination of these factors—plus the reality that 81% of the population lives in rural areas—means that reproductive health issues are not being adequately addressed in this society, said Franklin Ishida, ELCA director for Asia and the Pacific.

In fact, only 50% of young women and 86% of young men in Nepal have heard about HIV and AIDS, he added.

“That has to do with literacy and poverty levels and the rural nature of many of the people,” Ishida said. “[Also], there are a large percentage of people who have misconceptions about HIV. For example, 90% of young people believe HIV is transmitted only through unsafe sex.”

Here, with the Nepali people, the ELCA is making a difference through innovative programming.

Sakriya Sath, a nonprofit, nongovernmental social organization in Nepal, educates and trains young people in sexual and reproductive health and rights. The organization aims to help reduce HIV infections and mitigate the impact of AIDS by informing young people and providing guidance to parents and guardians.

“If a commercial product can be marketed in this mountainous region at every courtyard, then why not a social message which can transform their lives?”

Recently, the organization created a radio program with a youthful tone to help teach 13- to 35-year-olds about HIV and AIDS and sexual and reproductive health. Some episodes are like public service announcements—three-minute vignettes that present and then resolve real-life problems—whereas others are longer.

“In some places, people speak only their mother tongue rather than Nepali,” said Shyam Sunder Banskota, director of Sakriya Sath. “In order to reach those listeners as well, Sakriya Sath developed the PSAs in their six local languages.”

Ultimately, Ishida said, the radio program is helping young children and adults discuss these issues. “This is creative,” he said. “They’re trying to reach the varied audience they have. … [It’s] not an educational program as much as it’s a conversational piece that people can listen to.”

Sakriya Sath and the ELCA first partnered in 2013, when ELCA World Hunger funded the translation and dissemination of two educational workbooks: Parenting: A Journey of Love and My Life—Starting Now: Knowledge and Skills for Young Adolescents. Both are part of the “Called to Care” series published by the Strategies for Hope Trust in the U.K. The resources are interfaith-based, which appeals to Nepal’s multifaith landscape, where Hinduism is the dominant religion.

The partners distributed over 1,500 free workbooks to schools, churches, mothers’ groups, community groups and international organizations, and offered workshops for youth, parents and guardians on how to appropriately use the workbook lessons.

Some of the longer episodes have been turned into 60-minute podcasts available through Hamro Patro, Nepal’s most popular mobile app, with more than 7 million downloads.

The program is reaching the Nepali people in unexpected ways.

Despite those challenges, roughly 77% of Nepali youth and 63% of Nepali parents are online today, he said.

“Cellphones and internet are a lifeline as online shopping, podcast[s], online radios and YouTube channels are [becoming] widely popular even [in] rural Nepal,” he said. “If a commercial product can be marketed in this mountainous region at every courtyard, then why not a social message which can transform their lives?”

The themes of the “Called to Care” workbooks and radio programs are guiding the daily life conversations of Nepali families, Dhakal said, adding that not only individuals but also the government appreciate the lessons.

“The government’s logo as a partner in our banners and programs is unexpected, but this achievement’s magnified our authenticity and promoted the wide usage of ‘Called to Care’ workbooks,” Banskota said.

Through the audio episodes, Dhakal said, Sakriya Sath now has a nexus of more than 25 schools, 10 radio stations and millions of listeners through Hamro Patro, online streaming partners and other digital sources. The programs have accumulated more than 1 million visits through six online platforms.

“It’s so exciting when a school from Ramechap or other remote areas invites you for a training after listening [to] our audio episodes,” he said. “It’s very delight[ful] to listen to church members explaining how these episodes have made them a tru[ly] peaceful and blissful Christian family.”