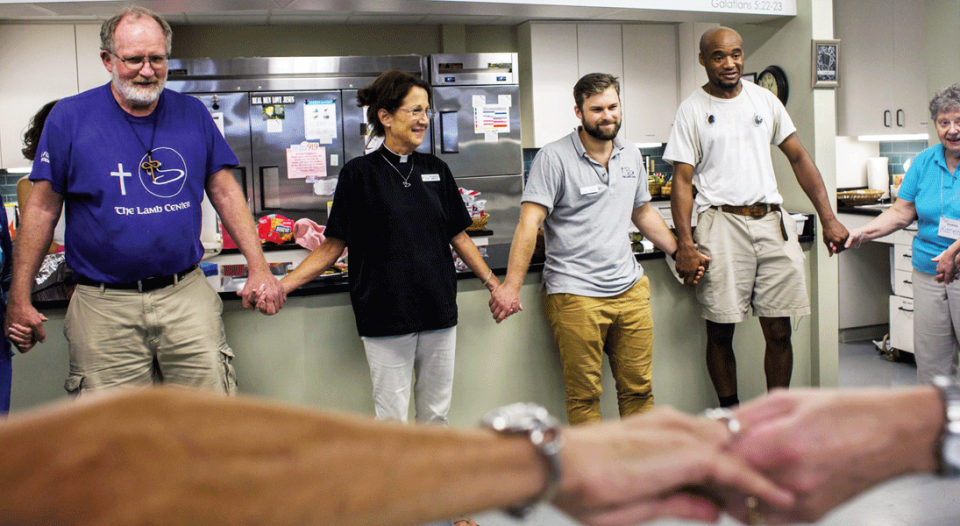 Credit: Courtesy of the Lamb Center

(Image from 2019) Dave Larrabee (left), who said his ministry at the Lamb Center has been strengthened since becoming a deacon, gathers guests, volunteers and staff in a prayer circle. He said he appreciates being able to share Lutheran theology with the Lamb Center guests he meets.

Over the past half-century, the meanings of “ministry” and “minister” have changed dramatically for many Lutherans. “Minister” used to refer exclusively to an ordained man, also called “reverend,” “pastor” or “preacher,” and the ministry belonged only to those who wore clerical collars and stood in pulpits on Sunday mornings.

Today we have much broader and richer understandings.

For example, in 1970 two ELCA predecessors, the American Lutheran Church and the Lutheran Church in America, began ordaining women. This year, as the ELCA celebrates the 50th anniversary of that great leap forward, more than one-third of its pastors, including bishops, are female. Women make up more than half of some graduating seminary classes.

Alongside that historic development, a quiet but growing movement sought to affirm and undergird the ministry of the laity, or all the baptized.

The great reformer insisted that every Christian engages in a lifelong ministry of serving Christ in the neighbor. Lutherans believe that all are ministers who participate in “the priesthood of all believers.”

While Luther even claimed that every Christian is ordained by baptism, he recognized that lively spreading of the good news is served well by setting apart a cadre with special preparation and particular duties for equipping the whole people of God for their ministries.

While the calls and responsibilities of pastors and deacons are complementary, the roles of each are distinct.

Ministers of word and sacrament are responsible for tasks and duties spelled out in some detail in the ELCA’s constitution. All pastors are to preach the gospel, administer sacraments, conduct worship, provide pastoral care, encourage others to consider rostered ministry and “speak publicly to the world in solidarity with the poor and oppressed” (“Constitution, Bylaws, and Continuing Resolutions of the Evangelical Lutheran Church in America,” 7.31.02.).

The responsibilities of deacons and pastors overlap, and both are public “ministers of word” who proclaim the gospel. Deacons also specifically “advocate a prophetic diakonia that commits itself to risk-taking and innovative service on the frontiers of the church’s outreach, giving particular attention to the suffering places in God’s world” (“Constitution, Bylaws, and Continuing Resolutions,” 7.61.02.).

In 1995, the ELCA created the new lay category “diaconal ministers” while retaining its rosters for deaconesses and associates in ministry. But a few years ago, the church launched a round of discussions about rostered leadership that culminated in the 2016 Churchwide Assembly decision to combine the lay rosters into the current roster of Ministers of Word and Service and to establish the title of deacon. A 2019 Churchwide Assembly vote determined that the entrance rite for deacons will be ordination.

Margaret Schmitt Ajer has served the ELCA under three different titles, and her winding pathway reflects the church’s journey of determining how best to organize its rostered ministers.

Originally an associate in ministry, Ajer discerned a call to lay diaconal service and became the first consecrated diaconal minister. She now goes by “Deacon Ajer” and belongs to the roster of Ministers of Word and Service. She has served as a regional coordinator in the Western U.S. and a bishop’s assistant in the Metropolitan New York Synod.

Regardless of title, Ajer said, “my call has always been the same—to focus on the intersection of church and world, to bring the needs of the world into the attention of the church and to proclaim the good news of Jesus to the weary world.”

Though the ministry of the diaconate has been part of the ELCA since its beginning, the recent changes to the roster of Ministers of Word and Service drew attention to the fact that people across the church still misunderstand the role of deacons.

Nancy Gable of Gettysburg, Pa., felt drawn to diaconal ministry by a deep sense of calling that didn’t fit neatly into many people’s notions of public ministry.

Challenged over the years as to why she’s not a pastor, Gable said, “It’s a different sense of where the word lives within us and how it’s called out of us.”

While she respects those called to pastoral ministry, “my personal driving passion doesn’t line up with presiding at the table or pulpit preaching,” she added.

Helping people understand her calling has been a challenge, Gable said, adding, “It was especially frustrating when some of our bishops didn’t understand what we are about and many in our church just weren’t accustomed to persons serving in ministry who aren’t pastors.”

Guy Erwin, bishop of the Southwest California Synod, concurred with Gable’s assessment and sees an ongoing challenge “to define, in a way people can understand, the differences between pastors, deacons and active laypersons.

“The frontier for us is discovering the engagement of ministers of word and service outside of congregations. It will take some real education.”

God’s work in the world

If one were to think of the institutional church as God’s state department, pastors would be those who serve in the home office. Deacons would be the church’s ambassadors, scattered throughout the world.

Pastors may do most of their preaching from a pulpit, whereas deacons more frequently proclaim the gospel by their lives and actions in social ministry organizations, in public policy advocacy centers or in synodical or churchwide positions that bring the word into worldly arenas.

Dave Larrabee and Deb Haynes are ELCA deacons who serve in an ecumenical ministry at the Lamb Center in Fairfax, Va., which extends aid and compassion to the poor and homeless.

After three decades of military and government service, Larrabee felt that God was calling him in new directions. He met Haynes, who had just enrolled in seminary and was aiming toward diaconal service. “As soon as she described it, I knew God was calling me too,” Larrabee said.

He was consecrated on his 61st birthday at the same worship service where Haynes entered the diaconal roster.

Larrabee said becoming a deacon has strengthened his ministry at the Lamb Center. “It helps me a lot with the spiritual part of our ministry,” he said. “While I teach the Bible without saying I’m a Lutheran, I can share our theology. There are a lot of messages out there, and they’re not all about grace.”

As a deacon, Kate Lawler-Wunsch spearheads an innovative ministry for Chicago’s North Shore hospital system. She leads a team that equips the hospital for outreach to victims of domestic violence, sexual assault and human trafficking. The project recently received a $1 million federal grant to expand its efforts.

Lawler-Wunsch’s ministry embodies a phrase she underlined in her consecration service bulletin, stating that deacons are to “cross every barrier that stands between the church and its ministry in the world.”

Just as athletes are added to a team roster after demonstrating their ability to fill needed positions, ELCA rostered ministers meet demanding criteria and then receive calls to specific ministries.

Ministers on both rosters are steeped in studies of Scripture, theology, church history, and Lutheran confessional and ecumenical understandings.

In addition to studies in theology, diaconal candidates may hold degrees in social work, psychology or counseling to equip themselves as chaplains in hospitals, nursing homes, hospice ministries or educational institutions. Others will gain skills in community organizing and advocacy to engage in ministries at the intersection of church and society.

Some deacons will bring to one of the church’s expressions their expertise in education, administration, legal matters or other specializations. For example, the ELCA elected a deacon as its secretary for the first time when Sue Rothmeyer was chosen for the position at the 2019 Churchwide Assembly.

John Largen, a dean of the chapel at United Lutheran Seminary in Gettysburg, Pa., has contributed to the spiritual formation of seminarians for decades. He said he celebrates how the church has embraced broader understandings of ministry since his ordination four decades ago. He hopes more calls will be open to deacons who “bring a sense of urgency or holy impatience” for service.

Largen said the ELCA’s ministry clearly has broader outreach as deacons lead the church out into society. “They help parishes to know better the needs in a community and how to get our hands dirty helping,” he said.

In services of ordination and installation, laypeople and rostered ministers promise to work together and support one another. Some congregations experience the unique partnership in which a deacon and pastor are paired in ministry.

This is the case at St. Paul Lutheran Church in Lititz, Pa., where Rob and Emily Myallis, a pastor and deacon respectively, both serve. They interned together at a California congregation and then served in separate settings in their first calls. Now they are again paired in a congregation that welcomes the gifts of both.

Like other deacons, Emily has encountered some confusion about her calling, but rather than try to explain in words, she “[shows] people what a deacon is and does.”

Her stance has always echoed the words of the prophet Isaiah: “Here I am; send me!” (Isaiah 6:8). “I say, ‘Here I am; where can I be sent?’ she said. While her primary focus now is with St. Paul’s children’s ministry and early childhood center, she has also developed outreach efforts that expand the congregation’s service among those experiencing poverty in its community.

Rob shares Largen’s assessment of how a deacon can broaden a congregation’s understanding of its mission: “Again and again, as a minister of the word, Emily helps connect us to the larger world.”

In 2020, the ELCA has much to offer and to celebrate, including the blessings received since its predecessor churches decided to ordain women 50 years ago and the gifts of diaconal ministry it has embraced for the past quarter century. And opening rostered service to others who had previously been shut out—women of color and the LGBTQ community in particular—has further expanded the church’s vision of ministry.

Amid societal turmoil and tensions, the way people live out complementary callings within the priesthood of all believers has much to offer by way of example. A congregation or other community in which all the baptized—the laity and the rostered or nonrostered public ministers—work together in harmony offers powerful public witness.

While the situation varies by location and setting, in many places the ELCA has a desperate need for more rostered ministers. The message Paul delivered in his epistle to the Romans couldn’t be more urgent: “And how are [people] to hear [the Lord’s name] without someone to proclaim him? And how are they to proclaim him unless they are sent? As it is written, ‘How beautiful are the feet of those who bring good news!’” (Romans 10:14-15).

A unified word and service roster