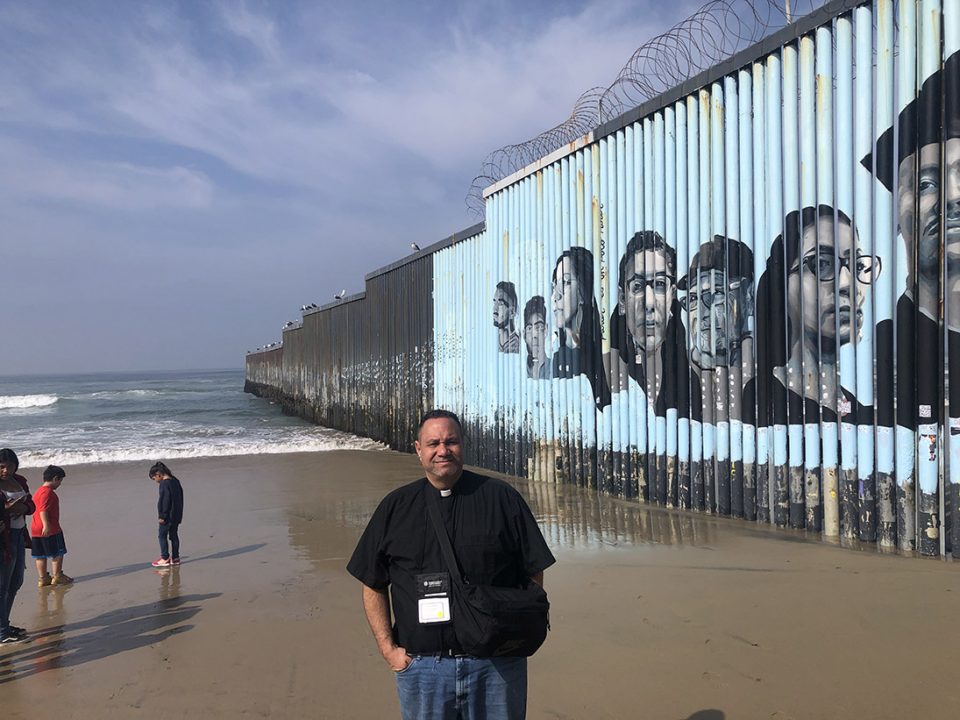 “For [Christ] is our peace; in his flesh he has made both groups into one and has broken down the dividing wall, that is, the hostility between us” (Ephesians 2:14).

On Feb. 18, 2020, more than 100 people — ELCA lay leaders, pastors and bishops, plus representatives of the church’s ecumenical partners — crossed the U.S.-Mexico border near San Diego and visited the city of Tijuana. I was one of them. The trip was part of the ELCA’s United States-Mexico Border Experience: Frontiers for Mission. I was excited to enter Tijuana and talk with leaders from the Lutheran and Methodist churches in Mexico.

We met them at the border wall, near the beach, where we celebrated communion. Heidi Neumark, pastor of Trinity Lutheran Church of Manhattan, New York, preached a powerful sermon based on John 20:24-28. She reminded us that the wounds of Jesus are seen today in the suffering experienced by migrant families as they journey toward the border looking for asylum.

After the sermon, a lay leader from the Mexican Methodist Church invited us to touch the border wall as he led us in a confessional prayer. We asked God to forgive our hostility and our desire to create walls that divide us. I felt as if our prayers were being used by Christ to remove the walls between us. I felt that my presence, along with that of everyone else, was a sign of God’s kin-dom.

At our baptism, God calls us to break down walls. Baptism sends us to our neighbor. No wall, policy or human border can stop that.

Roberto Trejo, pastor president of the Mexican Lutheran Church, and Irma Bañales, director for evangelical mission for the Northern Texas-Louisiana Synod, co-presided at the communion table. Our improvised altar stood in front of an orange cross that was painted on the border wall. The contrast was poignant, a reminder that humans create walls that divide, whereas Jesus Christ welcomes all people at the table of grace and mercy.

Another sign that God in Christ was breaching walls during this event was the sight of the border wall extending into the ocean. As I stood by the border, I noticed how the waves lapped up against the wall. The ocean water was corroding it, which reminded me of our mission as church. At our baptism, God calls us to break down walls. Baptism sends us to our neighbor. No wall, policy or human border can stop that.

Later we learned that the plaza where we held worship was called Friendship Park. Before the wall was built, people from the United States and Mexico used to enjoy fellowship, exchange gifts and share meals at this plaza. The very ground on which we worshiped was proclaiming the truth about Christ.

Today, a restricted area prevents people on the U.S. side from reaching the wall. On the Mexican side, one can walk right up to it. Artists from Mexico have adorned with color and beauty this monstrous monument to human fear. One illustration portrayed two pinky fingers intertwined, alluding to the time when people were able to greet each other across the border only using their pinky fingers. This illustration reminded me that love overcomes obstacles created by fear and hate.

After worship, the group split to visit various migrant shelters in Tijuana. My group visited Centro Scalabrini, a Roman Catholic migrant shelter. At the shelter, we heard testimonies from two migrants who have benefited from this welcoming place.

I brought with me some Bibles, money and toiletries for the shelter to use in its mission. I wasn’t the only one. Everyone brought something to leave at the shelter. We left the gifts at Christ’s feet so that he could use them in his mission of breaching walls and bringing people together. I crossed the border back to the United States, knowing that Christ is restless in his mission and that we are his tools in that holy task.

Grace extended to congresswoman through LIRS