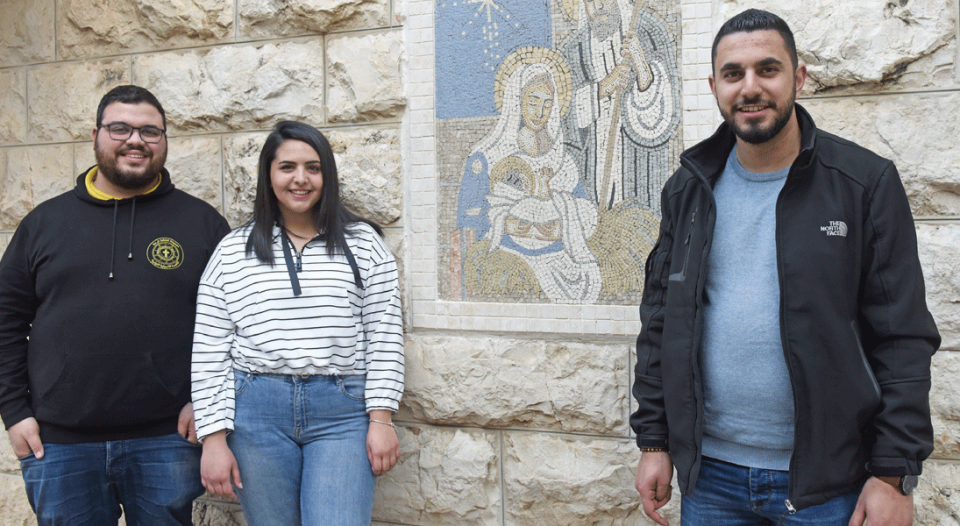 Elias Boulous (left), 25, scout leader; Sally Dawoud, 25, youth leader of the Lutheran Scouts Group; and Rodney Saïd, vicar of the Evangelical Lutheran Church in Beit Sahour, West Bank, are part of a group of young Lutherans who are dedicated to keeping the church alive and vibrant.

Born in Jerusalem, Rodny Saïd felt called to serve the Evangelical Lutheran Church in Jordan and the Holy Land (ELCJHL). “I felt my call was specifically to one geographical point in the world,” he remembered. “Palestine.”

But the seven years he spent in Waterloo, Canada, earning his undergraduate degree in Christian studies and his M.A. degree of divinity, changed him. “At one point, my life was so much easier [in Canada] I decided I didn’t want to come back. Life had become so miserable [in Jerusalem].”

Then, just before receiving his contextual placement, Saïd began to reconsider his decision to remain in Canada. In the end he returned to Jerusalem to serve as vicar of the Evangelical Lutheran Church in Beit Sahour and to teach in its high school.

“I had been called by a whole community to come back and serve,” he said. “It was a tough decision to make, but when I came back, I felt so joyous as the people were so welcoming. Coming back here, I realized that there was something connecting me to the land and the people here. We live in a communal society.”

That was nearly a year ago. Since rejoining his Palestinian Lutheran community, Saïd, now 25, has dedicated himself to keeping the church alive and vibrant. He belongs to a group of young Lutherans who stay in Palestine despite a complex political situation that restricts their job opportunities and freedom of movement.

Here, on this sacred, historic land that continues to be fraught with conflict, Saïd anticipates observing another Holy Week. Even with the challenges, he reflected, “I am renewed for Easter just by being out in my community, with people who walk with me and I walk with them.”

Many young Palestinians consider emigrating once they graduate from college. Faced with this reality, the ELCJHL tries to give them a space where they can be creative and participate in the community, said Munther Isaac, pastor of the Evangelical Christmas Lutheran Church in Bethlehem.

During the Easter season it’s important to preach hope, he added, but it’s equally important to make people hopeful, to give them a sense that they are important and are making a difference.

“We are not restricted by the limitations of [the Israeli] occupation,” Isaac said. The Bethlehem/Beit Jalla/Beit Sahour area has some 800 people in the Lutheran community, he noted, and the Lutheran Scouts boast a membership of 200 youth, most of them not Lutheran.

“Coming back here, I realized that there was something connecting me to the land and the people here.”

Scout leader Sally Dawoud, 25, is Greek Orthodox. She works with the older girls on community involvement projects and empowers them as leaders.

“The desire to see Beit Sahour doing well is what keeps me here,” Dawoud said. “I love my country and my community. I want to better the future for the next generation. I am teaching the girls to be active participants in the community.”

Especially during the Easter season, Saïd added, the resurrection message of hope and renewal has special significance for the Palestinian Christian community.

“Living the Palestinian reality, we get to Good Friday and it is hard to see Easter Sunday, there is so much depression and oppression here,” he said. “But I need to push myself to see [Easter] Sunday in the midst of darkness so we can step inside that and see the joy of Easter in the midst of all the pain we live.”

For 25-year-old Elias Boulous, another scout leader, the message of the resurrection includes the concept of forgiveness. “Forgiving and asking for peace does not mean giving up; being forgiving, you can also be asking for justice,” he said. “After dark there is always hope.”

As Palestinian Lutherans—young and old—anticipate Holy Week, some need to make special arrangements.

Palestinian Christians living outside Jerusalem need a travel permit to enter the city during the holiday. In recent years, Isaac said, most people who request a permit receive it, but “it is still sad and wrong that we need a permit to go to Jerusalem, 10 minutes away.”

Many people choose to mark Holy Week in their local congregations rather than go through the permit application process, he said.

Israel started restricting passage of Palestinians during the second intifada when Palestinian militants carried out suicide bombings on public buses.

“Living the Palestinian reality, we get to Good Friday and it is hard to see Easter Sunday, there is so much depression and oppression here.”

Still, Boulous said, there is a unique sense of following in Jesus’ footsteps when one enters Jerusalem during Holy Week. “Everyone in the world has heard of the resurrection, has read about it in the Bible,” he said. “But the fact that I am able to go to Jerusalem and walk the Via Dolorosa … I feel that [specialness] when I enter the Old City. Seeing the bishop holding the cross, singing hymns and seeing other groups from all over our country and abroad is very special.”

Daily prayers are held in local Lutheran churches during Holy Week. On Holy Saturday, the Lutheran community participates with the wider Christian community in the Orthodox tradition of welcoming the holy fire as it arrives from the Holy Fire Ceremony at the Church of the Holy Sepulchre. “It is a big community event, thousands are waiting, and families go out to the streets and receive the light,” he said.

Worshipers spend Easter Sunday with their extended families, and men, observing a Palestinian custom, visit their sisters, female cousins and other women relatives who are married. (Women traditionally celebrate holidays with their husband’s family, and the men’s visits allow the women to greet their own families on the holiday as well.) Calls are also paid to families who are mourning a loved one’s loss and won’t have a festive celebration for the holiday.

Even as the political situation continues to worsen, Isaac said, his message is one of hope. This is what he’ll preach in advance of Easter Sunday and beyond.

“The word we use here is to ‘cultivate’ hope,” Isaac said. “The Sunday of resurrection will come, but that doesn’t mean we just sit and wait. I believe God called us to action and intervenes through us, but the intervention that happened 2,000 years ago becomes our call to impact things.”

Judith Sudilovsky
Judith Sudilovsky is a freelance journalist who has covered the intersection of faith, politics, people and hope in Israel and the Palestinian territories for 25 years.