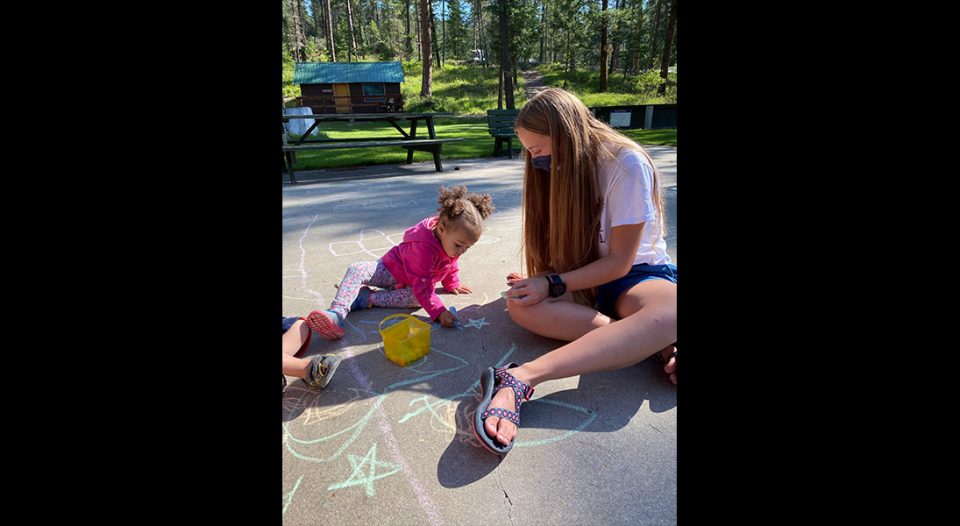 Flathead Lutheran Bible Camp in Lakeside, Mont., canceled summer youth camps this year because of the COVID-19 pandemic and instead hosted family camps.

Because of the COVID-19 pandemic, some Lutheran outdoor ministry organizations in the United States have canceled their summer camps for the first time in 100 years.

“This was heartbreaking for the children who would have been campers this summer and their families,” said Don Johnson, executive director of Lutheran Outdoor Ministries (LOM). “The loss of revenue for the camps because of the cancellation of summer camp has been extreme.”

Even the 20 LOM camps (out of 119) that did offer overnight summer camp for youth had to operate at 50% capacity or less in order to maintain strict public health protocols.

Summer camp 2020 was an act of shutting down, going virtual or managing risks.

The theme for the summer at Shetek Lutheran Ministries in Slayton, Minn., was flexibility and creativity, as camp was reinvented to adhere to federal health guidelines and recommendations.

“We kept groups small and limited our cabin groups to nine campers at the most, along with one counselor,” said Marv Nysetvold, executive director. “Most weeks we did not have nine campers in a cabin group, however, since we had only about 30% of the campers that we normally have. Many campers canceled.”

All activities were outside unless there was rain. If campers were inside for anything, they wore masks. They also wore masks whenever they were singing during worship services, even though they were outside and physically distanced from other cabin groups. And registration and departure times were staggered, Nysetvold said.

Every meal was plated and delivered to the campers, and, unless there was rain, all meals were eaten outside. Before campers arrived, Nysetvold said, they completed a screening form over two weeks, recording their temperature daily and monitoring themselves for any COVID-19 symptoms.

Jeff Bluhm, executive director of Lutherdale Ministries in Elkhorn, Wis., said he made many adjustments to camp this year to keep everyone safe. Instead of the usual 2,000-plus campers Lutherdale welcomes each summer, this year it had only 206.

“We ran a successful program with guidelines and protocols that kept everyone safe and healthy.”

The camp also opened later—July 5 instead of its usual start date in mid-June. As with Shetek, each camper had to keep a temperature log for 14 days before coming to camp. Summer staff were quarantined for two weeks before any campers arrived and throughout the entire camp session, to prevent their exposure to outside sources of COVID-19.

All activities were confined to cabin mates; there were no large group activities. Camp sessions were limited to three days and two nights, and summer staff was limited to nine people rather than the usual 35.

“We ran a successful program with guidelines and protocols that kept everyone safe and healthy,” Bluhm said. “We had no health scares, no COVID-19, no one was sent home from camp. Everyone stayed healthy, everyone had a good time, built relationships [and] learned the biblical concept of hope.”

The board of directors at Flathead Lutheran Bible Camp in Lakeside, Mont., canceled all summer youth camps this year, which included programs at the camp’s main site, day camps in congregations and wilderness servant trips. According to Margie Fiedler, executive director of Flathead, these were replaced by family camp, during which families would come for a night, a week or longer.

“We did as much as possible outside, including every lunch,” Fiedler said. “We had a wonderful small summer … only 584 people as opposed to 4,057 last summer.”

Despite all the changes, Fiedler said, many adults and families were able to experience the joy of camp. “We had all the fun of camp with people that would not have been able to attend if we had held youth camping.”

Many of the camps that decided to cancel summer sessions were ambitious in organizing and distributing virtual camp programs. In most cases, there was little or no revenue generated by these ventures and considerable cost involved in their production, Johnson said.

Travis Aufderheide, executive director of Green Lake Lutheran Ministries in Spicer, Minn., said that after all on-site summer camp and retreat ministry were canceled, the staff “pivoted online” and shared two alternatives: a daily, 20-to-30-minute live worship and a virtual vacation Bible school program called “We Are the Church: Together and Apart.”

“Our typical mode of ministry thrives in community with others, shoulder to shoulder, living out our love for God and one another in creation,” Aufderheide said. “This summer our sites were comparatively quiet. But through the [new] programming … we were absolutely blown away with the reach of our work. It was amazing to see pictures from families and congregations who had never even heard of Green Lake Lutheran Ministries doing crafts, singing songs learned through the videos and acting as the church, even in quarantine.”