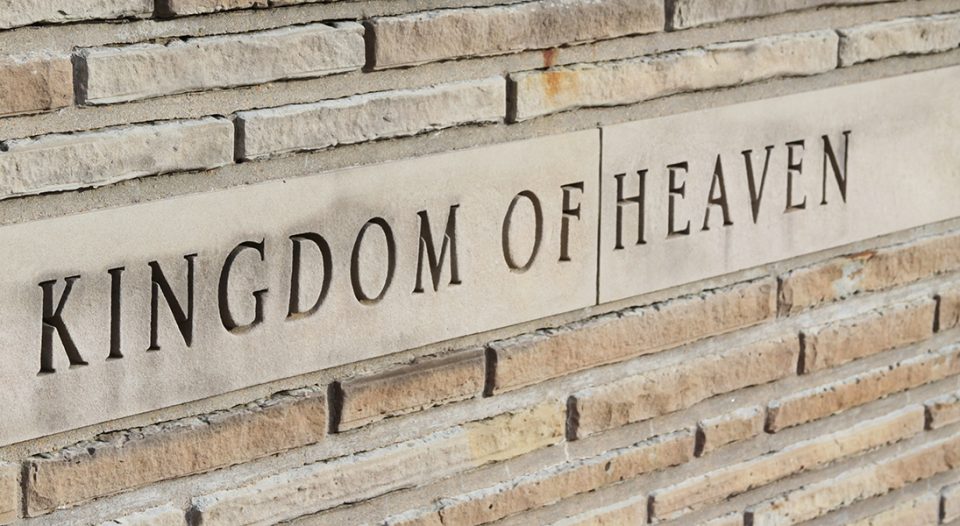 The kingdom of heaven is advancing forcefully (Matthew 11:12). Anyone with eyes to see and ears to hear knows there is actual evil in the world. Lutheran Christians remember a time of systemic misinformation that kept people bound by feelings of guilt and trying to purchase salvation with good works. The kingdom of heaven advanced forcefully, and the good news of God’s grace was recalled once again.

Then decades, and indeed centuries, of religious conflict swept across Europe between Christians who held differing notions of how humans are saved. But the kingdom of heaven kept advancing, despite the awful bloodshed and murder, such that today Christians of different denominations and even churches can disagree peacefully while working together to love neighbors and communities.

The kingdom of heaven suffers setbacks when people do evil, especially in the name of Jesus. But then the kingdom always advances.

One particularly powerful example of the kingdom advancing comes from the Gospel of Matthew. But the story frequently loses the power of what Jesus is saying amid speculation about who or what Peter was meant to be. As in last week’s readings, the key to understanding this story is knowledge of the context in which Jesus was speaking. The Gospel writer includes the essential information that the following conversation happens in the region of Caesarea Philippi. This city sat at the base of Mount Hermon and was a site of devotion to the Greek god Pan. In fact, during Jesus’ lifetime, approximately 14 CE, the city was renamed from Paneas to Caesarea. The Jewish historian Josephus, writing at the close of the first century, called the place Caesarea Paneas.

The kingdom of heaven suffers setbacks when people do evil, especially in the name of Jesus. But then the kingdom always advances.

The connection to Pan was strong—with good reason. The city featured a cave shrine that was dedicated to the worship of Pan. It was known as one of many “Gates of Hades” around the Greco-Roman world. The theory was that the gods would periodically enter the underworld for a prolonged, seasonal sleep. But raucous worship would cause the gods to wake up from the realm of the dead and return to hear the petitions of the living. Worship forms that Jews and early Christians found troubling, including ritual prostitution and bestiality, were practiced in order to arouse the temporarily dead gods from their slumber. People would literally scream, asking that they be allowed to live another year and crying out that they not starve or die of disease. They struggled against death—but tried to do it with their own strength by practicing degrading worship meant to bring their gods back from the dead.

With this contextual knowledge, the lectionary readings for this and next week make much more sense. When Jesus asked his disciples who people said he was, all of them named dead people whom they supposed had been brought back to life, coming up from the place of the dead. When Jesus asked who the disciples thought he was, Peter gave a combative answer: “You are the anointed one, the Son of the living God” (Matthew 16:16). Peter was contrasting Jesus, and the God of Israel, with the dying and rising gods of the pagans. In calling Jesus the anointed one, Peter, no doubt, was referencing Psalm 16:10. An anointed person was holy and set aside for a special purpose. Peter was leaning on the promise that God would not allow the holy one to see the decay of the grave.

Pleased with this answer, Jesus blessed Simon with his new name, Petros, a piece of a rock. Peter would be given the keys to the kingdom of heaven and be allowed to determine what was acceptable behavior within it. “Binding” and “loosing” are technical rabbinic terms that mean “prohibiting” and “allowing,” respectively. Peter would take on this role, especially in Acts 10 and 15, to decide what is allowed by whom in the kingdom.

But then Jesus added that on this rock, presumably Mount Hermon, he would build his community (ἐκκλησίαν in v18 and elsewhere, should not be understood in any sense as a building, but as a community of people called out to assemble together). He added that the Gates of Hades, at the base of the mountain, would not be able to prevail against the community of Jesus.

We must remember that gates are, by nature, defensive structures. They are meant to protect a city against invaders. Jesus is saying that his community, and the kingdom of heaven, will advance forcefully against the grave and death (remember, “Hades” doesn’t mean “hell”; it is, rather, simply the realm of the dead, analogous to Sheol). Jesus is going to mount a raid into the territory of sin and death, and he will free captives stuck behind the Gate of Hades (Ephesians 4:8). Peter will disagree vehemently with Jesus over the tactic that had been chosen to break into the realm of the dead, but we will talk about that next week.