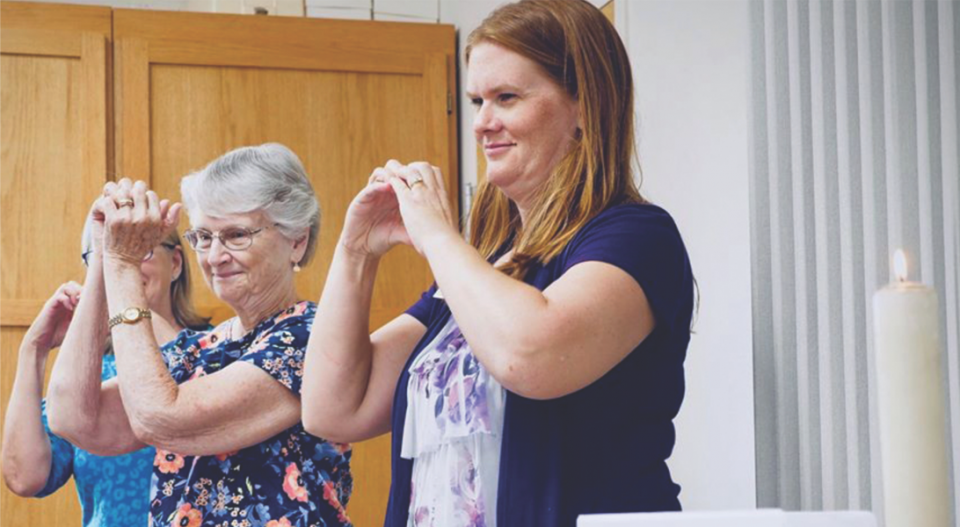 Courtesy of All Saints Lutheran Church

Children from All Saints Lutheran Church, Phoenix, participate in a book drive as part of a monthlong intergenerational stewardship challenge.

When 7-year-old Harlow Rice decided what he’d give to the book drive for All Saints Lutheran Church, Phoenix, he reached not for the older, worn ones on his shelf but for some of his newer “Mia Mayhems.” “Mia Mayhem” is a popular, action-packed series about a regular girl with a supersecret—she’s a superhero-in-training.

“I was thinking about how particular books would make people feel,” Harlow said of his donations. “Other people should read them so they know girls [are] power[ful].”

His 5-year-old brother, Boesen, also donated some of his books, which made him feel “great,” he said.

The book drive was part of All Saints’ participation in the Live It Out—10% Generosity Challenge, drawn from the ELCA Generosity Project.

The Generosity Challenge, with its tangible goods drives, helps people explore sharing 10% of all they own or earn.

For one week, congregants were asked to count the books in their homes and consider what it would be like to tithe them away (give one-tenth). To help the younger members, Dan Hoeger, a pastor of All Saints, brought in 60 of his books and asked them to pick six that he should donate. By week’s end, All Saints had given away more than 3,500 books to a nonprofit that supports the Phoenix public library system.

The congregation spent a month talking about faith-driven generosity, three weeks of which were dedicated to collecting and donating books, food and clothes for people in need. During the fourth week, members pledged financial and other offerings to support their congregation.

By the end of the challenge, congregants of all ages had a new understanding of generosity.

Prior to the Generosity Challenge, All Saints members had been looking for ways to move beyond the idea of an annual fundraiser to express their stewardship, Hoeger said. They also wanted to involve children and youth.

The Generosity Project is intentionally intergenerational, with a focus on congregations equipping households as centers for practicing generosity, Staats said. The Generosity Challenge, with its tangible goods drives, helps people explore sharing 10% of all they own or earn.

Parishioners met each week’s challenge with strong participation. “Everyone had something concrete that they could give and then see how it is joined in with everyone else’s giving,” Hoeger said. “With things like money—people have a harder time seeing their gifts being gathered and valued.”

Beyond the goods gathered, Staats said, the challenge is meant to trigger conversations in households. “This is exactly what All Saints did,” she added. “They helped households ‘practice’ being generous over a four-week period, leading up to their Commitment Sunday. They had fun doing it—and the results are astounding.”

A new sense of community

On the last week of the challenge, children wrote pledge cards vowing to give of themselves. Some pledged to serve in worship, help in the community and pray for others, said Kristin Rice, a pastor of All Saints. Their enthusiasm was contagious, and adult members pledged to give generously of their time, talents and financial resources too.

“Whenever we [involve young people], not only do they get a way to participate in ownership and support of the congregation, but also they challenge older members to look beyond their own safe boundaries that we all erect around our money and possessions,” Hoeger said.

“Whenever we [involve young people], they challenge older members to look beyond their own safe boundaries that we all erect around our money and possessions.”

Perhaps the biggest shift was the congregation’s understanding of generosity. “As we did [the Generosity Project] together on Sunday mornings and included this into our preaching, the congregation started talking more of ‘generosity’ as a marker for who we are as a community,” Hoeger said.

This is exactly what Staats hopes the challenge will do—push congregations and households to reimagine stewardship.

“We need to ask, ‘Where does being generous begin?’ Ideally it begins in the home where it is modeled as a part of living out one’s faith each and every day,” she said. “I do not believe enough emphasis is given by congregations to equipping and supporting households as the place where generosity is practiced and learned.”

Staats said trying the Generosity Challenge could change that: “Congregations that teach and encourage generosity as ordinary acts of daily discipleship are equipping individuals of all ages as God’s faithful stewards.”

Larry’s bike and his big heart

How a whole new ministry unfolded