Editor’s note: In keeping with this month’s theme issue, Presiding Bishop Elizabeth Eaton is sharing her favorite food and faith story, which originally appeared in her September 2017 column.

Old recipes are precious things. They give instructions about how to prepare a dish, but they are so much more. They are filled with memories. They connect families as they are passed from one generation to the next. They bring events and people from long ago right into the present.

I am looking at a recipe card that has that effect on me. It’s my mother’s recipe for stuffing for turkey. It’s written in her neat hand—a skill I never mastered. It’s a basic recipe, just bread and butter and onions and celery and poultry seasoning. I don’t even have to read it now when I make stuffing, but I like to look at it because it puts me right back into Thanksgivings past. 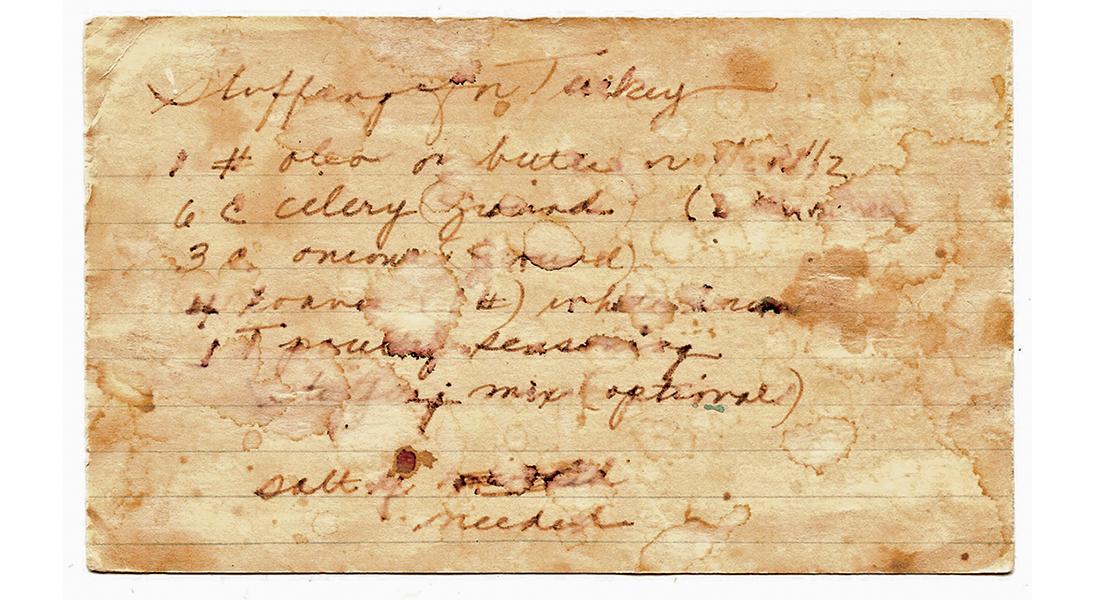 Thanksgiving in our family was an event. The Eatons have been gathering for Thanksgiving dinner for nearly 70 years. We traded off between our house and my aunt and uncle’s home. When it was our turn we got up early and started cooking.

Out came the recipes and equipment. There were no food processors in those days. We had a cast iron food grinder that clamped on to the edge of the kitchen table. It was kept in its own special box. It only made an appearance once a year and its emergence signaled that Thanksgiving had arrived. Grinding the celery was no problem. Onions were another story. My brothers and I spelled each other at turning the crank until we were overcome by the fumes.

No matter what, when my mother or my aunt announced, “Supper’s ready,” we all came to the table together. We were family, we shared our lives, we loved each other.

My parents and my aunt and uncle established this tradition shortly after World War II. We have always had three and sometimes four generations present. A lot has gone on in our family and in the world these past decades. Marriages, children, moves, deaths, war, recession, elections, the ’60s. We are a lively bunch and none of us lacks an opinion or the ability to express it. Conversations were spirited and sometimes heated. My father and my uncle served in the army during World War II. My older brother and older male cousins didn’t support the Vietnam War. We belong to different political parties. We are Lutheran and Catholic and members of the Unification Church and unchurched. We are liberal and conservative.

But no matter what, when my mother or my aunt announced, “Supper’s ready,” we all came to the table together. We were family, we shared our lives, we loved each other.

A lot is going on in our church and in the world right now. We are a changing church, which brings its own tension. We live in a wired world where news is instantaneous and continuous. We don’t agree on everything. We belong to different political parties. We have varied ethnicities. We’re liberal and conservative and everything in between. We’re in an “either/or” world. And we are contending with cultural forces that exacerbate division. But by the tender love of God, by this ceaseless pursuit of the Spirit, we are members of the body of Christ. We are family. We share our lives. We love each other.

Here is another simple recipe: flour, water, wine, the body and blood of Jesus. A meal of healing, forgiveness and thanksgiving. No matter what, when our Lord tenderly and urgently invites, “Supper’s ready,” we all come to the table. There in our common brokenness we meet each other in Christ.